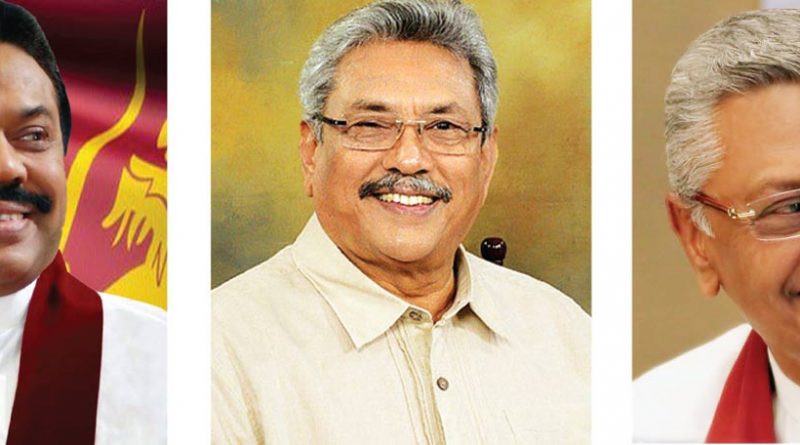 When retired military officer Gotabaya Rajapaksa swept to victory in last November’s presidential election, it sent out an unmistakable signal to Sri Lankans and their neighbours: the Rajapaksa clan was back in town.

There was, however, an important difference from the past when Mahinda Rajapaksa was president. That Rajapaksa regime held power during the war years when the country was fighting the Liberation Tigers of Tamil Eelam (LTTE), a ruthless enemy banned by many western countries and Sri Lanka’s neighbours as a terrorist organisation.

Also, Sri Lanka’s elected parliament had a critical opposition then, which performed its oversight functions as any democratic legislature would. So the Rajapaksa presidency could not entirely ignore parliament, for it needed national support to fight the secessionist enemy.

But times have changed. Unlike in the years of ‘Rajapaksa the Elder’, today’s administration has both the presidency and the premiership in its hands, with no parliament to contend with.At the first constitutionally sanctioned opportunity, Gotabaya (popularly known as Gota) dissolved what he perceived as a troublesome parliament dominated by the opposition.

So on March 2, by presidential proclamation the parliament, which had another six months to run, was dissolved as constitutionally permitted.

Within a couple of days of his November election as president, Rajapaksa Junior named his elder brother Mahinda as prime minister. Mahinda had previously served two terms as president until he was defeated at the 2015 election, which he called prematurely, believing his reputation as a war hero who ended one of Asia’s longest armed conflicts was etched into the hearts of the Sri Lankan people.

With Gotabaya at his side as defence secretary, Mahinda was credited with providing the badly needed political will and momentum that eventually led to Sri Lanka’s security forces crushing the 27-yearlong minority-Tamil insurgency.

That was in May 2009. With Mahinda and Gotabaya hailed as war heroes, Mahinda Rajapaksa was an easy rider at the 2010 presidential race. Thereafter parliament chose Mahinda’s elder brother Chamal as Speaker, while Mahinda brought another brother, Basil, into the cabinet as minister of economic development.

In those early years ‘Gota’ had shown no particular interest in politics. He was more a technocrat and accepted to serve under brother Mahinda, a two-term president.

With Mahinda debarred from contesting more than two terms by a constitutional amendment that cut the political ground from under the feet of the Rajapaksas, the ruling President Sirisena-Prime Minister Wickremesinghe government seemed determined to keep the Rajapaksas powerless and corralled.

It wasthen that Gota’s close associates in business and academic circles, several powerful Buddhist monks and retired military officers coaxed and cajoled him to enter the presidential fray. The SirisenaWickremesinghe coalition government was by then in total disarray. Bitter feuding at the highest level made political co-habitation between them impossible. So the conditions seemed ripe for another Rajapaksa to take centre-stage.

If a tattered and seemingly helpless government enhanced Gota’s chances, other unconnected developments buttressed his claims for political power, for which he had presumably now acquired a taste.

On Easter Sunday last year Muslim extremists bombed three Christian churches and three luxury hotels in Colombo, killing some 270 locals and foreigners and injuring over 400 others. Fearing that terrorism had returned to Sri Lanka, this time in the shape of Muslim jihadists, the country’s Buddhist majority and others began urging strong leadership in Sri Lanka. They condemned the Sirisena government for not taking seriously enough at least four intelligence alerts from India about an impending attack.

With the public calling for a tough and resolute leader and his former military colleagues encouraging him, Gotabaya was now riding the crest of a political wave. An influential Buddhist monk even called on him to act like a Hitler and govern the country with the help of the military. This caused public concerns that the country would be militarised, egged on by ultra-nationalist monks who had little interest in democratic governance.

The internal squabblesin the opposition United National Party (UNP), which ended with it eventually splitting down the middle, opened the doors wide for the newly formed Sri Lanka People’s Front (SLPP) led by Mahinda, allowing it an easy passage at the upcoming parliamentary election.

But President Gotabaya’s plans for an election and gaining control of parliament were scuppered when the coronavirus surfaced in Sri Lanka and began to spread.

The Election Commissioner Mahinda Deshapriya, in consultation with his two fellow commissioners and other stakeholders, declared that the election could not be held on April 25, as proclaimed by the president. He named June 20 as the earliest possible date, as he had to deploy several thousands of public officials to man the polling stations, where it would be extremely difficult to maintain social distancing and supervise voting procedures without violating some health safety regulations.

The decision to postpone the vote opened a constitutional Pandora’s box that ended up in the Supreme Court with a five-member bench sitting as a constitutional court in the latter half of May.

At the time of writing on May 24, the court was yet to conclude its hearing of at least eight petitions filed by individuals and civil society organisations. It is unlikely that the court’s determination will be known until the tail end of May

Having won the presidency, Gotabaya Rajapaksa was keen to hold the parliamentary election as soon as constitutionally permitted. His decision to dissolve parliament at the first opportunity and set a date for the election was proof enough of his haste to have a new parliament up and running.

His desire is to win a two-thirds majority in parliament, which would allow him to make constitutional changes, particularly to rescind the 19th amendment that took away several presidential powers and invested parliament and the prime minister with them.

Rajapaksa wants them back to ensure he has the necessary powers to push through his policy agenda. But now the outbreak of the coronavirus, and the Election Commission’s subsequent decision to put off the election, have raised a number of constitutional issues, including the validity of the presidential proclamation about dissolving parliament and fixing a date for voting.

The constitution requires that once parliament is dissolved, the next election and the first meeting of the new parliament should be held within three months. So June 2 would be the last date for that. But now it cannot be done, with the Election Commission having set a June 20 date, which itself might be postponed further if the virus has not been brought under control and the safety of public officers on election duty cannot be assured.

Some petitioners argue that since the three-month period stipulated has not been met, the proclamation has no legal validity and the dissolved parliament should be reconvened. It is argued that the president cannot dip into the public purse for funds without parliamentary sanction, for which parliament must be reconvened. This Gotabaya has steadfastly refused to do, possibly fearing that parliament might stymie his plans.

Other petitioners are challenging the Election Commission’s June 20 date for elections on the grounds that it is not yet safe, and undermines the democratic right of a free and fair election by denying political parties and candidates sufficient time to prepare for the polls.

While the Supreme Court bench mulls the constitutional conundrums, President Rajapaksa, in celebrating National Heroes Day on May 19 – the anniversary of the LTTE’s surrender on the battlefield – struck a note of defiance. He said he would withdraw Sri Lanka from any international organisation or agency that abused or threatened the country’s tri-forces for violations of international law and human rights abuses.

That would not have gone unnoticed in chanceries around the world, especially those of countries that have threatened to haul military officers before international tribunals.

President Gotabaya, who has appointed many senior retired military officers to positions in the civil administration and is backed by majority Sinhala-Buddhists, is determined to tough it out. But much will depend on the rulings of the Supreme Court.