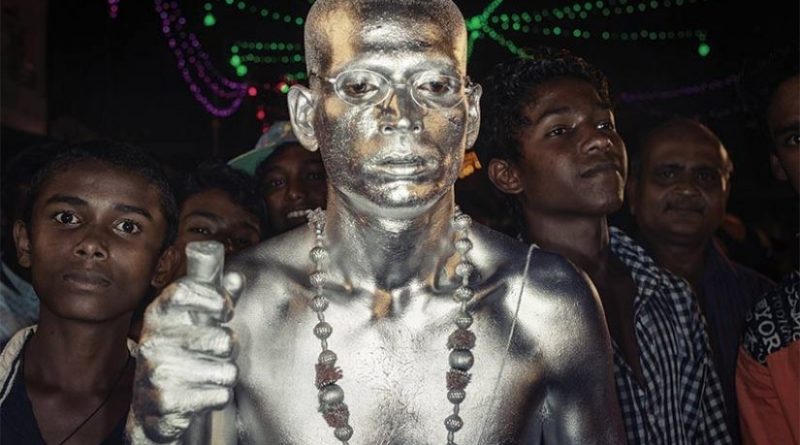 At first glance, Centralia looks like a beautifully produced coffee table art book – until you look closely at the photographs and other compelling images and are drawn into a world where nothing is what it seems. Any reader not familiar with India or its politics must work hard to piece together where the photographs were taken, the background and history of the region.

Poulomi Basu, the main inspiration for the book, as well as its co-author and main photographer, makes it clear from the outset that her intention is not to present a conventional linear narrative, since she contends that it is not always easy to distinguish between truth and fiction.

Centralia is described as ‘an Indian docu-fiction that journeys deep into the forests of central India, where a little known and under-reported conflict between an indigenous tribal people and the Indian state slowly simmers. In war, truth is the first casualty. Centralia explores the unsteady relationship between reality and fiction and how our perceptions of reality and truth are manipulated.’

This neatly summarises the subject of Centralia, which is set largely in the north-eastern Indian states of Chhattisgarh, Odisha, West Bengal and Jharkhand, home to the region’s forest-dwelling tribal population, as well as lucrative mineral deposits of iron ore, bauxite and coal. Over the years, hundreds of people have been driven off their lands as industries take over. The displaced have responded by taking up arms and joining local Maoist groups known as Naxalites, who have been engaged in an ongoing conflict against the Indian government. Countless people have been killed in the civil war which began decades ago.

Most of the photographs have been taken by Basu herself, though several people are credited with writing and helping to compile the book. Basu is an activist who campaigns for the rights of women and underprivileged groups such as the indigenous tribes of central India. The book is mainly a collage of graphic photos and images, though the time and place they were taken is not specified. There are portraits of young women who joined local guerrilla groups to fight the oppressors and were ‘martyred’ in encounters with the police; dramatic and symbolic images of flames, some with shadowy figures in the background. There are, too, photos of dead bodies – people who have allegedly been killed in an encounter of some kind. Other images are of the indigenous people’s festivals and religious ceremonies.

Gradually, like pieces of a jigsaw, one is able to build up a picture of the world to which we are being exposed. Poulomi Basu was raised in Calcutta but is familiar with the area of central India where Maoists are active. She has witnessed at first hand how local inhabitants have been driven out of their lands and homes by mining companies and others intent on exploiting the area’s rich mineral resources. She exposes corruption involving local politicians, business people and the police.

We come to understand why Maoists have been able to attract local people to take up arms to defend their land. The response by the authorities is often brutal, with allegations that innocent villagers are routinely shot dead by police, who falsely accuse them of being rebels. There is evidence of staged encounters, with villagers’ bodies being dressed in uniforms with guns placed in their hands. The police are accused of ruthless killings, kidnappings and rapes, and few outsiders are able to establish the truth. Police have also been killed in attacks by militants, as all sides are brutalised in the process. Readers of Centralia also learn that journalists whose reports do not fit the accepted narrative of police heroically battling murderous Maoist ‘terrorists’ are themselves threatened and undermined by their editors and other powerful forces.

Some readers may find the book disjointed and confusing but, as Basu herself writes, it is not a simple matter of distinguishing between what is true and what is false.

‘The names, the dates, the events in our pasts swirl and merge in a confusion of intent, of sequence, of meaning. There was a murder: was the killer a policeman or a guerrilla? There was an accident, and a truck overturned: did it hit a mine or was it simply overloaded? A village was evacuated: were Maoists threatening its occupants, or did a mining company want access to the ore underneath it? In here, in the dark, there is plot and counterplot. There is fabrication and there are brazen, incredible lies. There is evidence and there are isolated facts, but no way to connect them into a coherent chain of logic.’

Many books have been written about the roots and history of the Maoist insurgency in India. This is not what is delivered in Centralia. What the book vividly portrays is the tragedy of indigenous people who have the misfortune to live on land rich in valuable minerals. They are evicted by profiteers eager to plunder these resources. When the villagers join insurgent groups to defend their land, they are labelled as ‘terrorists’ and attacked and killed by government forces.

As well as India, Centralia will surely resonate in other parts of the world where indigenous people, who simply wish to lead their lives unmolested, find themselves in a similar predicament. This pattern is seen in Malaysia, the Amazon and other countries and regions where forests are being destroyed and local people displaced by mining and logging companies, industrialists and developers.

Basu has been showered with international awards for her depiction of ordinary people struggling to survive in a world that is constantly changing. One hopes that Centralia will contribute to an understanding of the damage inflicted on human lives in the unfettered quest for shrinking resources, and compel those in power recognise the human cost of the relentless drive for growth and development.