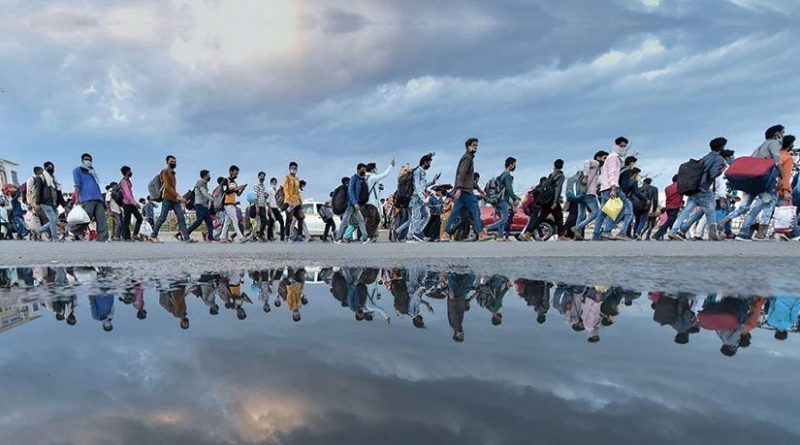 India has clear plans on how to deal with future challenges, both domestic and international, in a post-lockdown landscape. G. Parthasarathy reports

As the weeks pass since Prime Minister Modi declared an unprecedented lockdown with the advent of the deadly coronavirus, people in India are now reconciling themselves to the reality that they must prepare for situations where changes will proceed incrementally. With some rare exceptions, the provisions of the lockdown are being modified in a measured manner after meetings presided over by the Prime Minister, in which prolonged discussions took place with the Chief Ministers of the states. The Founding Fathers of India’s Constitution can be more than satisfied at the manner in which these meetings have been conducted, in a spirit of mutual understanding. They have resulted in decisions enjoying near unanimity, with flexibility, where differences are discussed and reconciled.

Over 100,000 people have been afflicted by COVID-19. State resources have been stretched by the large numbers of cases in states like Maharashtra (principally in Mumbai), Tamil Nadu, Gujarat and the national capital, Delhi. More importantly, the Union and State Governments have agreed that, rather than depend on external sources for machinery and equipment, Indian industry should be mobilised to work on a war footing to meet the country’s requirements for items ranging from ventilators to surgical equipment and face masks. This effort has produced satisfying results, including overcoming the problems arising from India having to reject and return huge imports of machinery and equipment from China, which were found to be sub-standard.

One thing is now clear: there is no ‘one size fits all’ solution for dealing with the challenges of COVID-19, and both New Delhi and the State Governments have to be nimble-footed and innovative. India has mercifully avoided problems arising from ideological and other differences between institutions at the national, state and local levels, like those faced by the Trump Administration in the US.

The Modi Government has also held detailed discussions with State Governments on how to deal with the economic problems that will inevitably arise because of the disruption to or closures of businesses, including hotels, road, rail and air transport, together with media organisations. The power sector has continued to perform satisfactorily, but road transport has been curbed in areas where there have been a large number of people hospitalised. But the real tragedy that has befallen people is the misery of migrant labour which takes up temporary residence in large towns and cities.

With industries and business houses reducing their staff substantially, millions of migrant workers have gone through difficult and traumatic experiences as they return on foot or on bicycles to their homes, sometimes hundreds of miles away. The journey became particularly difficult as road and rails services remained shut down. But, with New Delhi and State capitals agreeing on a broad framework for resuming business, commercial and industrial activities, there now appears to be a clearer understanding of what lies ahead.

Looking to the future, India appears to have a defined map for the road ahead in coming months. Medical facilities across the country are being equipped and expanded to deal with growing numbers of coronavirus cases. Cricket stadiums and other public places are being suitably converted to accommodate the flood of new cases, who will have to be dealt with before the situation stabilises. At the same time, Provincial Governments across the country are preparing to create conditions for resumption of industrial, business, transportation and communications activities. A massive investment plan has been put in place to rehabilitate immigrant farm labour and resume activities in a phased manner. Dealing with the harvesting and marketing of agricultural products, and help for farmers, enjoy the highest priority.

Issues of national security and foreign policy are now back in focus. There have been incidents of violence, and terrorism along India’s borders with China and the Line of Control in Kashmir have occurred at almost the same time. New Delhi is aware of the training and arming of terrorist elements in camps in Pakistan-occupied Kashmir. There could be measured retaliation if this continues.

More importantly, there was also a clash involving over 100 soldiers from each side along the Line of Control in Ladakh, across disputed sections of the Sino-Indian border. This de-escalated after a meeting between local commanders on both sides. There is no reason for India to believe that such tensions will again escalate. But there are larger concerns about the growing Sino-Pakistan military relationship, which is now assuming maritime dimensions across the oil-supplying western sea lanes of India. New Delhi has also voiced serious concern over China’s move to build a huge hydro-electric project in the Gilgit-Baltistan region of Kashmir, at a time when infiltration from across the Line of Control is continuing.

At the wider international level, there have been continuing exchanges between China and India in forums like the Shanghai Cooperation Organisation. New Delhi has been careful not to publicly refer to its concerns about growing Sino-US tensions and shrill rhetoric arising from China’s lack of transparency in the events leading to the coronavirus crisis in Wuhan. India has avoided taking sides on this issue but is nevertheless working closely with the US, Japan, Australia, New Zealand and Vietnam to deal with tensions arising from Beijing’s growing maritime boundary claims with its neighbours. Moreover, there are mounting problems associated with widespread displeasure about the role of the WHO Secretary General Dr Tedros Adhanom Ghebreyesus.

The issue of restoring the ‘Observer Status’ Taiwan held in the WHO between 2009 and 2016 will also be a subject of heated discussion at the WHO’s Executive Board, of which India is the current Chairman. China is resolutely opposed to any role for Taiwan in the organisation, while the US and its allies, including Japan, are on the opposite side. In the meantime, India joined a Resolution moved by 62 countries for an international investigation into the events and factors resulting in the emergence of the coronavirus. The Resolution was passed with the support of 120 nations. China was left with no option but to agree, and was also left in no doubt about the strong prevailing sentiments across the world about the origins of the virus. The discussions on Taiwan’s readmission to the WHO as an ‘observer’ will require more time, and will inevitably be more contentious.