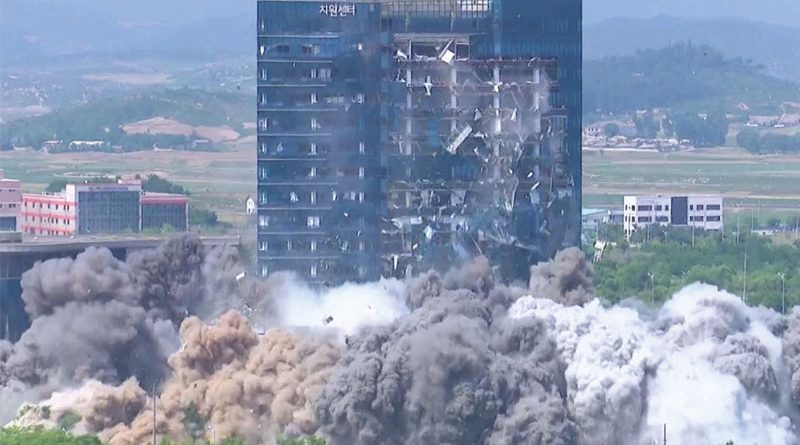 In blowing up an inter-Korean liaison office, Pyongyang has placed explosives under its relationship with Seoul, and made its presence felt on the world stage. Thomas Cynkin analyses the situation

In a dramatic representation of current tensions on the Korean Peninsula, North Korea on June 16 literally blew up its joint liaison office with South Korea in the city of Kaesong, inside the borders of the hermit kingdom.

This followed a statement earlier this month, foreshadowing this move, by Kim Yo Jong, Kim Jong-un’s sister and a rising star in the North Korean political firmament. Speculation is rife that she is being established as successor-designate to Kim Jong-un, who has no known adult children, and may be attempting to demonstrate her bona fides by taking a hard line against Seoul.

The day following Kim Yo Jong’s statement, North Korea more formally announced it would pull out of the joint liaison office, which had functioned as a two-way North-South embassy of sorts. Pyongyang attempted to justify its decision by complaining that Seoul did not stop North Korean defectors from sending balloons with anti-Kim leaflets over the border to the North. In May 2018, Seoul had made a commitment to end the balloon propaganda campaign.

More broadly, however, North Korea’s explosive move was intended as a dramatic provocation to blow up its relations with South Korea. This served as a repudiation of South Korean President Moon Jae-in, and a signal to the United States of Pyongyang’s frustration that its diplomatic momentum with Washington – and any immediate prospects of sanction lifting – had come to a full stop.

North Korea is meanwhile threatening to deploy military forces in the Kaesong Industrial Zone as well as Mount Kumgang tourism areas, intended to become exemplars of North-South economic cooperation; go back on a 2018 agreement and re-establish guard posts in the Demilitarised Zone; and ‘resume all kinds of regular military exercises in the areas close to the border’, according to the state-run Korean Central News Agency.

These actions demonstrate the ephemeral nature of any North Korean ‘concessions’ to date, or of any progress in North-South relations that Moon imagined he had received in exchange for helping deflate the US maximum pressure campaign. All gone in a wink of Kim’s eye, effectively symbolised by the dramatic destruction of the $15 million building (paid for by South Korean taxpayers).

Setting aside the specifics, North Korea’s actions are not terribly surprising given the familiar pattern of Pyongyang escalating tensions before US presidential elections, as well as to express frustration, especially when feeling ignored.

We may also infer that North Korea is attempting to signal that, despite persistent health rumours surrounding Kim Jong-un, the North remains ‘strong’. Also, Kim may well have reason to act tough in order to placate domestic elites, whose expectations for sanction lifting were no doubt raised by the Trump-Kim rapprochement, only to be dashed when the US would not accept a lopsided deal on denuclearisation.

Pyongyang apparently feels safer disrupting its relations with Seoul, rather than with Washington. While there may well be further North Korean provocations in the run-up to the November US presidential election, it would be imprudent for Kim to antagonise US President Donald Trump or jeopardise his chances of re-election, given the time, effort and personal prestige Kim has spent to cultivate him. Additionally, Kim and his entourage might well assume that a Democratic administration led by Joe Biden would focus less on cutting a deal and more on North Korea’s deplorable human rights situation.

Given present circumstances, Washington is understandably preoccupied with COVID-19, economic disruptions, and widespread social justice protests. Also, the US should not want to appear to be contributing to the downward spiral in North-South relations, for which it would shoulder a hefty amount of blame from the South Korean public. Therefore, it would seem questionable for the US to, for example, ramp up joint exercises with South Korea this summer.

While there are still sure-fire means for North Korea to grab Washington’s attention, Kim may well consider them to be counterproductive at present. For example, were North Korea to conduct nuclear or ICBM tests, the US would be compelled to react in a strong manner that Pyongyang would likely regret. Moreover, so would the international community, with increased prospects for tightening sanction regimes. China might even lower the boom on its erstwhile ally.

That said, a strong reaction by Beijing to North Korean provocations cannot be counted on now. Amid historically high China-US tension in areas across the board, it is not an opportune time to expect Chinese cooperation on North Korea absent the most egregious behaviour by Pyongyang.

Indeed, China may be pleased at North Korean actions which complicate Washington’s calculus with regard to US-China frictions, remind the US that there is utility in having a good working relationship with China, and occupy some US policymaking bandwidth. We might even speculate as to whether China is actually encouraging malfeasance by North Korea at this point as a distracting sideshow.

For its part, the US should begin to shift to a post-rapprochement phase, with a public diplomacy campaign emphasising how the Trump administration went the extra mile to try to denuclearise North Korea and establish better relations. The US should deploy this point in support of quietly intensifying the network of sanctions vis-à-vis North Korea.

Unfortunately from the Japanese perspective, North Korea has little or no incentive at this time to engage with the government of Prime Minister Shinzo Abe or make any progress on the abductee issue.

Diplomacy on the abductees is difficult to conduct in a vacuum, without the prospect for a broader thaw in political and economic relations. Japan abruptly suspending deployment of Aegis Ashore, an important element of the nation’s missile defence which also demonstrates the strength of its resolve, further disincentivises Pyongyang from dealing with Tokyo at this time.

While it is always difficult to predict with specificity the course the mercurial North Korean regime will take, we might anticipate Pyongyang continuing its series of limited provocations in coming months, aimed mainly at South Korea. North Korea will continue to make the case that it cannot be ignored, even as all eyes turn to Washington and the presidential election upon which so much, including the future of the Korean Peninsula, will depend.

Thomas Cynkin is a former US chargé d’affaires to the Conference on Disarmament in Geneva.     He is vice-president of the Daniel Morgan Graduate School of National Security

Republished with kind permission from The Japan Times