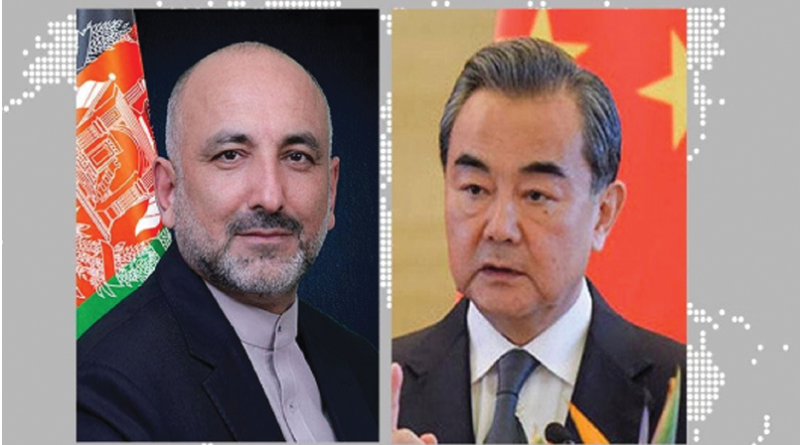 As the United States and its allies begin what looks like a final drawdown of their forces from Afghanistan, China appears to be expanding its role and influence in the country.

Beijing is actively enhancing contacts and potentially building robust relations with the Afghan government in Kabul and the Taliban, visibly pushing for a reconciliation between its longstanding ally Pakistan and Afghanistan. Moreover, it is underpinning this diplomacy with prospects for greater trade and investment in the impoverished country.

‘Afghanistan’s large natural resources could only be effectively exploited by near neighbours rather than distant neighbours because of the geopolitical and logistical requirements,’ he told Radio Free Afghanistan. ‘China is also signalling that it is the only country in the region with the financial and economic capabilities that can be relied on as a trustworthy partner.’

Based on leadership statements and actions, Sahar also believes that Beijing, keen to protect its security interests, is actively pursuing a close relationship with the Taliban and has declared its support for the Afghan peace process. A remote region in north-eastern Afghanistan is connected to the north-western Chinese region of Xinjiang, which is home to unrest and violence that Beijing views as a major threat.

Such interests have prompted China to attempt to cultivate a more robust relationship with Afghanistan. Over the past several weeks, senior Chinese officials have reached out to their Afghan counterparts.

According to an April 27 statement by the Chinese Foreign Ministry, ‘As a neighbour and friend of Afghanistan, China respects the Afghan people’s choice of their own development path and stands ready to continue to support, mediate, and facilitate the peace and reconciliation process in Afghanistan and further play its constructive role.’ The statement followed a telephone call from China’s Foreign Minister Wang Yi to his Afghan counterpart Mohammad Hanif Atmar.

‘China, more than anyone else, wants to see a harmonious Afghanistan-Pakistan relation and will contribute to any effort that helps improve the mutual trust and relations between the two sides,’ the statement quoted Wang as saying.

Beijing has also offered to host a dialogue between Kabul and Islamabad ‘to push forward cooperation among the three countries’.

Beijing, keen to protect its security interests, is actively pursuing a close relationship with the Taliban

Afghanistan is part of Beijing’s mask diplomacy amid the coronavirus pandemic that originated in China. The country has dispatched much-needed medical supplies, including face masks, protective gear and ventilators to Afghanistan to fight the COVID-19 outbreak.

When most NATO troops withdrew from Afghanistan in 2014, Beijing ditched its past policy of avoiding its western neighbour. It then attempted to become the biggest business investor in Afghanistan when Chinese companies announced billions of dollars’ worth of investments in copper mining and oil exploration. Chinese companies have been involved in Afghan infrastructure and development projects and, significantly, Beijing has extended some development aid and security assistance to Afghanistan.

On the diplomatic front, China supported reconciliation in Afghanistan, hosting informal meetings between the Taliban and Afghan government representatives, and welcoming public visits by senior Taliban leaders such as Mullah Abdul Ghani Baradar. It supported the process that resulted in an initial peace deal between the United States and the Taliban on February 29.

But Beijing’s low-key investment approach did not appeal to Washington. In November, Alice Wells, the recently retired acting Assistant Secretary of State for South and Central Asia, voiced criticism of China’s role in Afghanistan

‘China is not a provider of any significant grant assistance. It has invested or it has laid claim to a copper mine, a significant copper mine, but has never developed the copper mine,’ she told a   think tank audience in Washington. ‘I haven’t seen China take the steps that would make it a real contributor to Afghanistan’s stabilisation, much less stitching it back into Central Asia and the international community.’

Arif Sahar, however, says China is pursuing an aggressive foreign policy not only to thwart the West but also to undermine its neighbour and regional rival India in Afghanistan. In recent years, New Delhi has emerged as a close strategic partner of Kabul.

The report highlighted that China has widened its relationship with Afghanistan ‘toward a greater emphasis on political and military engagement’. It said the relationship ‘was largely confined to economic matters before 2015’.

Local officials in north-eastern Badakhshan Province, where Wakhan is located, recently claimed many Uighur fighters are present in the province. But the Taliban have rejected such claims.

Valey Arya, an Afghan commentator based in London, says the Chinese effort in Afghanistan is part of its larger push to utilise its economic, military, diplomatic and intelligence power in its immediate neighbourhood.

‘The withdrawal of coalition forces from Afghanistan, stability in the country, and a government which is friendly with Pakistan are other foreign policy goals of China,’ he said, arguing that these objectives are informed by Beijing’s close strategic alliance with Islamabad.

But he believes China is unlikely to assume the role held by the US and its allies in Afghanistan. ‘It’s very unlikely that, in the near future, China will have the will, mechanisms and resources to provide aid to other countries in the same way that Western democracies did. China doesn’t have that kind of tradition.’

Since late 2001, Washington and its allies have recreated an Afghan state by providing hundreds of billions in aid and helping Afghans resurrect and sustain key institutions. Beijing, however, seems more likely to pursue its own interests.

Mustafa Sarwar is a journalist with Radio Free Europe