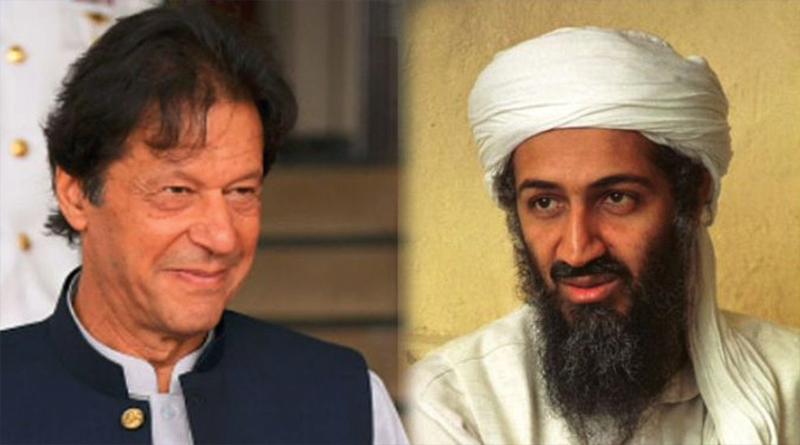 A controversial comment in parliament is the latest in a series of gaffes by Pakistan’s beleagueredleader, which the opposition is using against him. Rahimullah Yusufzai reports
Prime Minister Imran Khan is fond of speaking extempore, even if he is armed withwritten notes. This occasionally leads to mistakes and causes problems for his government.
On June 26, during his long speech in the parliament on the annual budget, he said the US ‘martyred’Osama bin Laden in a May 2011 raid in Pakistan.
Although the prime minister hadinitially used the word ‘killed’ to describe the American elimination of bin Laden, he then changed this to‘martyred’, saying also that the Americans had used abusive language against Pakistan and failed to inform Islamabad of the raid, despite the fact that it had sided with Washington in the war on terror, in which70,000 Pakistanis lost their lives.
The opposition immediately reprimanded the Prime Minister for referring to the al-Qaeda founder and mastermind of the 9/11 attacks on the US as a ‘martyr’. Khwaja Mohammad Asif, a former federal minister, reminded him that bin Laden had brought terrorism to Pakistan and ruined the country.
This was the latest in a series of gaffes that Imran Khan has committed. After every such incident, his office and aides start defending him by arguing that he didnot mean what he was understood to have meant. In this case, they argued that the prime minister first mentioned that bin Laden was killed, and that is what he meant.

As the term ‘martyr’, or ‘haheed’ in the local languages, is used for honourable and brave figures slain in war, often holy ones, Imran Khan’s use of the word gave his opponentsan opportunity to recall that he has always had a soft spot for Islamic militants. They reminded people that Imran Khan was even called ‘Taliban Khan’ by his critics because he backed the Afghan Taliban and termed their war in Afghanistan against the Afghan and US-led NATO forces as a ‘jihad’.

While in opposition, he also advocated peace talks with the Pakistani Taliban and demanded that a formal office be opened for the militant group to facilitatedialogue. For a long time, Khan was opposed to military action against the outlawed Tehrik-i-Taliban Pakistan (TTP), the main group of Pakistani Taliban, until he changed tack after the terrorist attack by the groupon the Army Public School in Peshawar on December 16, 2014, in which 147 persons, including 132 schoolchildren, were brutally shot dead and many wounded.

Since coming to power after winning the July 2018 general election, Khanhas been closely aligned with Pakistan’s powerful military, which obviously didnot like his previous views. Indeed, it has carried out action in the former tribal areas, now merged in Khyber Pakhtunkhwa province, against the TTP and its allies among local and foreign fighters since 2003, at a huge human and material cost.

The prime minister’s controversial comment was also seen as a jibe at the US, as he argued that the foreign policy of those who ruled Pakistan before him was wrong and they had made a mistake by partnering with America in the war on terror. He also criticised the US for scapegoating Pakistan for its failures in neighbouring Afghanistan, even though the international coalition force of 150,000 troops was put together by Washington to defeat the Taliban.

The government of Pakistan Tehreek-e-Insaf (PTI), the party founded by Imran Khan, is taking credit for renegotiating the relationship with the US to ensure there is mutual respect between the two countries. The prime minister claimed nobody insults Pakistan now, as it has strong leadership and an independent foreign policy. The US allegations that Pakistan is a safe haven for the Afghan Taliban and its affiliate the Haqqani network are now infrequent, more so due to the help Washington received from Islamabad in negotiating a landmark peace agreement with the Taliban in February 2020. The US is also banking on Pakistan to facilitate the intra-Afghan dialogue and make it a success by using its old contacts and influence on the Taliban leadership.
However, relations are still far from smooth as there are still a number of contentious issues between Islamabad and Washington, including US objections to Pakistan’s nuclear programme and its close relationship with China. For its part, Pakistan has strong reservations over America’s closeness to its old foe India, and occasional US criticism over the China-backed China Pakistan Economic Corridor (CPEC).
As for Imran Khan’s preference for making off-the-cuff remarks during his speeches at home and abroad, one reason his supporters offer is that he is a more capable speaker than his predecessor Nawaz Sharif.As prime minister, Sharif infamously read from small paper notes during a meeting with President Barack Obama at the White House. This wasnot a speech but a formal conversation between Obama and Sharif, telecast live. It is true that Imran Khan is highly educated and has studied at home and in the UK, but this is his first public job after being catapulted to power following a 22-year political struggle. He is learning on the job, is leading a party which often looks divided and has a thin majority in parliament. All this has made his taskdifficult as crises are caused whenever policy decisions are made.
The opposition, which is also divided, has been increasingly critical of the PTI government and relentlessly alleges that Imran Khan was brought to power in a rigged election by the establishment, which in Pakistan mainly means the military. Demands for the prime minister’s resignation were made by the opposition after the recent sugar, flour and petrol shortage crises, though to his credit Khan set up inquiry commissions and made public the reports, even though some of his own party leaders, including the sugar mills baron Jehangir Khan Tareen, were blamed for the scandals and action against themis now being considered.
As an example of the opposition’s virulent criticism against the prime ministerand his government, the ongoing budget session in parliament is witnessing heated debates every day. Imran Khan and his ministers are claiming achievements on every front, while the opposition parties – ranging from Nawaz Sharif’s PML-N, the late Benazir Bhutto’s PPP, the Islamist JUI-F and Jamaat-i-Islami, and the smaller Pakhtun and Baloch nationalist parties – all consider the government a complete failure, unable to deliver on its promises. They are particularly critical of its economic policies and response to the coronavirus pandemic. The prime minister, however, has continued to insist that his ‘smart lockdown’ to prevent the spread of COVID-19,rather than the enforcement of a full lockdown, has kept the economy running and saved lives.
Rahimullah Yusufzai is a Pakistani journalist and Afghanistan expert. He was the first and last reporter to interview Taliban leader Mullah Mohammad Omar, and twice interviewed Osama bin Laden in Afghanistan in 1998. His achievements have been acknowledged by several prestigious awards, including Tamgha-e-Imtiaz and Sitara-e-Imtiaz
Please follow and like us: