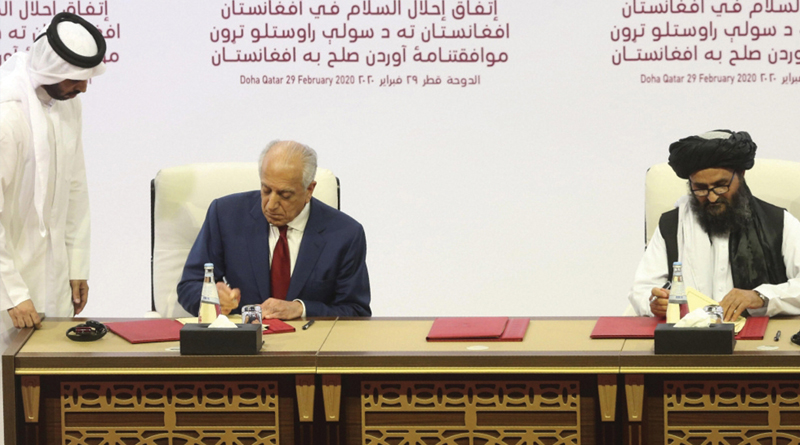 Yvonne Gill assesses what may come of the looming intra-Afghan talks, and what India has to gain from a peaceful Afghanistan

Half a century ago, Afghanistan was an almost isolated country. After Britain’s withdrawal from its erstwhile colonies, few in the West seemed interested in the affairs of this backward, underdeveloped country. At the most, it was a listening post to the Soviet Union, the then Communist superpower. But over the last 40 years, following America’s Operation Cyclone against the Soviet occupation – during which the US armed, trained and financed the Islamic jihadis via Pakistan– and later its Operation Enduring Freedom against the Taliban and al-Qaeda, Afghanistan has been a bloody battleground of rivalry between different players: global, regional and domestic. It has been and remains one of the most dangerous places on Earth.

By signing the ‘Agreement for Bringing Peace to Afghanistan’ with the ‘Islamic Emirate of Afghanistan’ (actually known as the Taliban), the US took the first step towards exiting Afghanistan, having battled the Islamic militia for almost two decades and lost thousands of men and billions of dollars.

All the big talk about war on terror notwithstanding, the US clearly capitulated in Doha, where the agreement was signed on February 29 this year in the presence of leaders from India, Pakistan, Qatar, Turkey, Indonesia, Uzbekistan and Tajikistan. The accord gave legitimacy to the Taliban, which is wedded to imposing radical Islamic rule and harsh Sharia laws in Afghanistan. It wants the country to be renamed the Islamic Emirate of Afghanistan instead of the present Islamic Republic of Afghanistan.

The Taliban is the most organised, radicalised and powerful faction of Islamic militants in Afghanistan and the region, largely representing the Pashtun tribes who form the majority 42 per cent of the Afghan population. The Pashtuns are also in large numbers across the border in Pakistan, where they make up almost 18 per cent of the country’s population, forming the second largest ethnic group after the Punjabis.

The US-Taliban accord envisages the complete withdrawal of US and Coalition forces from Afghanistan in a phased manner within 14 months. It includes the reciprocal release of 5,000 Taliban prisoners held by the Afghan government and some 1,000 prisoners held by the Taliban. It also calls on the US to engage diplomatically with the UN for the removal of both UN and US sanctions against the Taliban.

It has been agreed that the Taliban will not allow any individuals or groups, including al-Qaeda, which pose a threat to the US and its allies to operate from Afghan soil, and that there will be no attacks on US personnel and military establishments.

The moot point is whether the accord will bring peace to Afghanistan.Will the Taliban negotiate with other Afghan factions? Will the various warring factions, including the current Ashraf Ghani government, come to the negotiating table? How will the Tajiks, Uzbeks and Hazaras in northern Afghanistan, groups which have traditionally opposed the Taliban, be accommodated? And how can the powerful Taliban, which opposes the 2004 Afghan Constitution as ‘un-Islamic’, be made  a part of Afghanistan’s political process?

One of the countries which will be most affected by instability in Afghanistan is India. The country has invested a lot for peace and development in Afghanistan because any turmoil in the neighbourhood has serious consequences for its own security, Kashmir in particular. While Pakistan will be happy with the Taliban in power, it will be against India’s interests if moderate forces, and those aligned with the erstwhile Northern Alliance, are sidelined.

Violence, however, has not abated in Afghanistan over the last four months. June saw the seven deadliest days of the internecine war, and the Afghan Nationwide Protection Council says 291 Afghan troops were killed in Taliban attacks in just seven days. According to Javid Faisal, a spokesman for the Council, there have been 40 per cent more attacks by the group in the last three months, compared to the same period last year.

Haidar Afzaly, head of the Afghan Parliament’s Protection Committee, has expressed ‘deep concern’ since the agreement between the US and the Taliban was signed, saying that ‘the only group that has benefited… is the Taliban, who are seeing their prisoners released’.

As the American forces have stopped air strikes, the Taliban, he said, ‘are emboldened’ and ‘have expanded their attacks’, taking advantage of the coronavirus outbreak and the financial crisis to further their nefarious agenda. They are subcontracting killings and attacks to other groups and criminals.

Although the situation is grim, ‘the best manner for India to stay relevant to any discussion on the future of Afghanistan is to bravely invest in the Afghan economy,’ says Vaishali Basu, who is associated with the think tank Policy Perspectives Foundation.

She underlines that bilateral trade between India and Afghanistan is poised to reach $2 billion this year. ‘Taking advantage of Afghanistan’s 100 per cent FDI policy, the Indian government could encourage its firms to invest in Afghan power, pharmaceutical, optical cable, manufacturing and other sectors. For Afghanistan, durable peace will only be possible if its economy is healed.’

Davood Moradian, founder and director-general of the Afghan Institute for Strategic Studies, believes India should play an active role in articulating and promoting a process that leaves Afghanistan at peace. ‘Despite its structural flaws, the post-2001 constitutional order has the capacity and legitimacy to become the basis for an inclusive peace process.’

Writing in the Indian Express, he said: ‘India must come up with ideas and structures in the fields of development, politics, security and diplomacy. Similar to Iran’s tenacity and resolve in supporting the UN-recognised Syrian government, India can and should champion an inclusive, multifaceted and Kabul-centric peace process. Despite an adventurist temptation, “Afghanistan in pieces” is a nightmarish outcome for many stakeholders and even the Pakistan military establishment,’ Moradian added.

Meanwhile, the first high-level intra-Afghan dialogue is to start very soon in Qatar, where the Taliban has a political office. No date has yet been fixed but Deborah Lyons, the UN special representative to Afghanistan, told the UN Security Council on June 25 she was ‘cautiously optimistic’ that the talks could start in July.

Pointing to Afghanistan’s precarious financial condition, John Sopko, Special Inspector General for Afghanistan Reconstruction, a watchdog in the United States, has warned that ‘systemic’ corruption within President Ashraf Ghani’s government is weakening its bargaining position in upcoming peace negotiations with the Taliban. He accused the administration of only paying lip service to fighting corruption, ‘ticking off the boxes’ rather than arresting some of the worst offenders.

How can the Taliban be made a part of Afghanistan’s political process?

Afghanistan’s leaders must come to realise that in the end, private sector investment will matter far more to their country’s future than international donors, because after 19 years of war, foreign governments, including the United States, are growing weary of paying Afghanistan’s bills,’ he said.

International donors cover 75 per cent of Afghanistan’s operating budget and the US alone pays $4 billion annually to finance the war-torn country’s military and security forces.

One of the main obstacles to the start of negotiations was the issue of prisoner exchange.The Taliban’s political spokesman, Suhail Shaheen, has said the Afghan government has so far released 3,500 of their 5,000 Taliban prisoners, while the Taliban has released many of the 1,000 government personnel they hold captive, including army men.

Clearly, restoration of a sustainable peace in Afghanistan is still a long way off. With so many radicalised armed groups and competing regional interests – from Iran, Pakistan and India to Central Asian countries, not to speak of the looming Chinese shadow – one can only hope for the best.