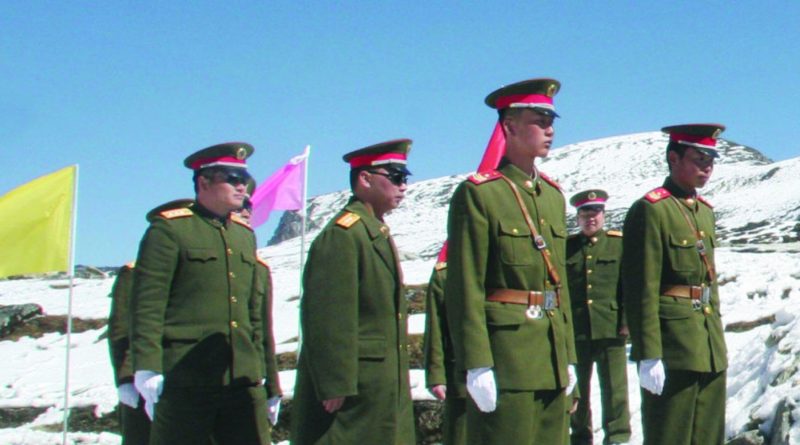 Sudha Ramachandran  views the escalating tensions between Beijing and Delhi through the prism of India’s border infrastructure.

The violent June 15 face-off between Indian and Chinese soldiers at Galwan Valley in Ladakh, which claimed the lives of 20 Indian soldiers and an undisclosed number of Chinese troops, is a critical moment in Sino-Indian relations. Not only was the face-off the deadliest between the two countries in around 54 years but also, it is the first time in 45 years that lives have been lost in clashes along the Line of Actual Control (LAC), the disputed border between India and China.

The LAC’s fuzziness – not only is the entire Sino-Indian frontier disputed but the LAC has been neither delineated nor demarcated – has often resulted in Indian and Chinese troops clashing. However, the escalation of tensions between the two sides since May this year is not on account of patrolling teams running into each other due to an unclear border. The recent tensions are the result of China’s planned intrusion into the Indian side of the LAC and the occupation of these areas by the People’s Liberation Army (PLA).

In some areas, such as Pangong Tso in Ladakh, the PLA has occupied territory lying between its own claim line and India’s. In other words, it has occupied disputed territory here where both sides have been patrolling for decades.

But its occupation of Galwan Valley is far more serious. Unlike in Pangong Tso, the LAC at the Galwan Valley was not disputed. Here, the PLA breached the LAC to take what was generally accepted by both sides as Indian territory, Indian analysts have pointed out. It then went on to erect tents, build bunkers and step up deployment of troops here. Thus, it dug into Indian territory. What is more, it has taken this occupation to the next level.

The day after the violent face-off at Galwan Valley, the PLA’s Western Theater Command spokesperson, Senior Colonel Zhang Shuili, said that China has ‘always’ exercised ‘sovereignty over the Galwan Valley region’. The claim has been reiterated by Beijing several times since.

China’s occupation of the Galwan Valley and its claims over the region have severely damaged Sino-Indian relations. It has reversed the process of normalisation of relations between the two countries in the decades since the 1962 war, and imperiled the agreements and protocols in place that had maintained a semblance of tranquility along the LAC.

So why is China willing to jeopardise these gains? What underlies its recent heightened aggression along the LAC’s western sector and its occupation of Galwan Valley?

India’s recent completion of the 255-km long Darbuk-Shyokh-Daulat Beg Oldi (DSDBO) road appears to be the immediate trigger for Beijing’s aggression. The DSDBO road runs almost parallel to the LAC. It links Leh, the capital of Ladakh, to Daulat Beg Oldi (DBO), which is located at the base of the Karakoram Pass that separates Ladakh from China’s Xinjiang Autonomous Region.

Prior to 2008, India’s capacity to defend the LAC in Ladakh was very limited. Movement of troops, equipment and supplies was severely hampered by the difficult geographic terrain and the lack of infrastructure on the Indian side of the LAC. There was an airfield at Daulat Beg Oldi but it was in a state of disrepair for decades. It was only after its refurbishment in 2008 that India could airlift supplies to the area. Airfields at Nyoma and Fukche were reactivated soon after. The capacity of the DBO airfield was enhanced significantly in 2013, with India now being able to land Lockheed Martin C-130J-30 transport aircraft there.

The DSDBO road takes this capacity to a higher level as India can now move troops and weaponry by road to the LAC and right up to the strategic DBO. It not only improves India’s capacity to defend its frontiers but also to threaten China here. This is of concern to China; DBO is around 10 km from the strategic Karakoram Pass and to its west is Gilgit-Baltistan, which is under Pakistani occupation and through which runs the China-Pakistan Economic Corridor (CPEC).

Especially in the context of India’s recent re-assertion of its claim over Aksai Chin – in August last year, after New Delhi split Ladakh from Jammu and Kashmir and brought them both under its direct rule, Home Minister Amit Shah told the Indian Parliament that both Pakistani-Occupied Kashmir, which includes Gilgit-Baltistan, and Chinese-controlled Aksai Chin belonged to India – apprehensions over the potential threat that the DSDBO road poses to China have grown in Beijing. It is in this context that the PLA’s escalation of pressure on India along the LAC must be seen.

The PLA’s capture of the Galwan Valley has put it in an advantageous situation as the ridges around this valley overlook the DSDBO road. Chinese troops are now in a position to threaten and cut off the Indian Army’s sole all-weather road to the DBO. By taking Galwan Valley, China has severely undermined India’s capacity to threaten Chinese positions, even defend its own territory along the LAC.

In 1962, China inflicted a crushing defeat on India. Not only did India lose Aksai Chin in Ladakh to the Chinese but also, the defeat made India extremely cautious in its policies and strategies vis-à-vis China. This was the case with regard to infrastructure building near the LAC, for instance. For decades, India avoided developing roads near the LAC for fear of drawing China’s ire. India’s security establishment also feared that building roads up to the LAC would facilitate an advance of Chinese troops into India in the event of war.

Unlike India, China built roads aggressively from the 1950s. Indeed, road-building was an important part of its strategy to occupy and then consolidate control over Tibet. Not only did its aggressive road and subsequent rail-building activity deepen Beijing’s thrust into Tibet; this infrastructure also extended its reach up to the LAC. Indeed, there are points on the LAC where China’s roads cross into disputed territory.

It was only in 2006 that India shed its defensive mindset on road-building near its frontier with China. That year, India’s Cabinet Committee for Security decided to build 73 strategic roads near its borders. In the years since, India has built roads and bridges near the LAC. Although this road-building activity has been hit by repeated delays, 61 strategic roads near the LAC are expected to be completed by 2022. This will enable Indian soldiers to patrol more often and deeper into areas where the Chinese have been patrolling frequently so far, and to mobilise troops near the LAC quickly should the need arise.

For decades, India avoided developing roads near the LAC for fear of drawing China’s ire

That India’s infrastructure-building near the LAC has rattled the Chinese in recent years is evident from the fact that PLA incursions into the Indian side of the LAC have grown in frequency, depth and duration in recent years. India’s development of the DBO airfield, for instance, prompted the PLA’s incursions at Depsang, Chumar and Demchok in Ladakh in 2013-14. Such incursions can be expected to increase in the coming months.

Since the face-off at the Galwan Valley, efforts are afoot to de-escalate tensions. Talks between military officials have taken place and engagement between diplomatic officials is likely to follow. In addition to pull-back of troops, infrastructure building can be expected to figure on the talks agenda, with China predicted to demand a scaling down of Indian infrastructure-building activity near the LAC.

India, however, has said that it will continue infrastructure-building in border areas. Projects that were suspended in the wake of the COVID-19 related lockdowns have been revived recently.

Experts are calling for a change in India’s approach to infrastructure-building near the LAC. Hitherto, its road-building activity here has been aimed at beefing up its military muscle and defending its territory. Instead, it should draw lessons from the Chinese approach of prioritising a geo-economic strategy. This would involve exploring cross-Himalayan trade opportunities and building roads that would carry soldiers as well as commodities for trade. In other words, India could work on connectivity projects similar to China’s ambitious Belt and Road Initiative.

This would require New Delhi to view roads in the Himalayas not just as pathways to defend itself better, but as an opportunity.