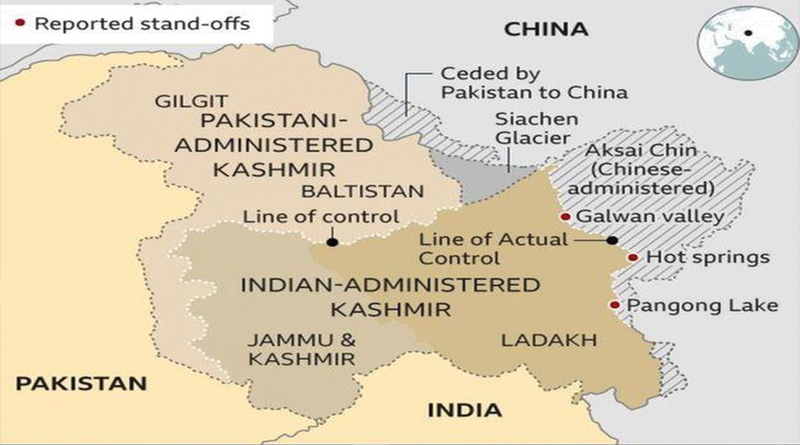 Amid intensifying hostilities with China, G. Parthasarathy believes India must expand military and economic ties with friendly regional nations, whilst remaining receptive to dialogue with Beijing
Passions are running high in India after 20 Indian army personnel, including a Battalion Commander, were martyred in a faceoff triggered by Chinese soldiers in the Galwan River valley, in the mountainous border region of Ladakh. An estimated 25-30 Chinese soldiers were also killed in this bloody encounter, when Indian forces retaliated. China has laid claim to parts of the adjacent Pangong Tso (Lake) region. The slopes of eight of the adjacent mountains, which are described as ‘fingers’, extend into the Pangong Lake. China has claimed four of these slopes. India and China subsequently reached an agreement for the withdrawal of Chinese forces from areas occupied by them. While this is welcome, the agreement needs to be fully implemented in letter and spirit. Concerns remain about the nature and scope of Chinese withdrawal from the Pangong Lake area. These developments have led to a review of the entire gamut of relations between India and China by the Modi Government.

Violent exchanges have occurred in the past between the Chinese and not only Indian army soldiers, but also the local Buddhist population, which deeply resents the Chinese presence in the Galwan River region. India had a military presence in the Galwan River Valley in 1962, which was overrun by Chinese forces during the Sino-Indian conflict on October 19-20 that year. There is, therefore, no legal or historical basis for Chinese territorial claims across the Pangong Lake and Galwan Valley, which are integral parts of India. China is, however, concerned about the road India is building, which traverses the Pangong Tso and the Galwan River to the border town of Daulat Beg Oldie, where India has built an airport capable of accommodating transport aircraft. Daulat Beg Oldie is located at a distance of around 8 kilometres from China’s strategic Aksai Chin region, which links its Buddhist-dominated Tibet, and its Muslim-dominated Xinjiang Provinces, where China is facing serious pressures from people asking for democratic governance.

Given recent developments, Huawei will not have any significant role in the 5G services in India

New Delhi is now attempting to comprehensively restructure its economic relationship with China. An adverse balance of $54 billion on trade with China is neither desirable nor sustainable. China now dominates the electronic sector in India: its companies assemble 70 per cent of India’s mobile telephones, and it is also seeking to dominate the coming 5G communications services in India through its massive Huawei conglomerate. One abid ing feature of all Chinese electronic telecommunication services in India is that its products have little value-added. Virtually every component is imported from China. Moreover, the entire technical management is in the hands of the Chinese. There is no technology transfer. Given recent developments, Huawei will obviously not have any significant role in future 5G services in India. Moreover, Taiwan is now emerging as a major partner, even in the US, in electronics and other industries. India is looking forward to undertaking major electronic and other projects with Taiwan.
Responding to China’s military intervention in Ladakh, India sent an unambiguous message to China when two senior Members of Parliament participated in the swearing-in of the reelected and gutsy President of Taiwan, Madame Tsai Ing-Wen. Beijing has little right to object to such gestures towards political figures in Taiwan, given its own business and investment ties there. Beijing has also been investing heavily in infrastructure projects in Pakistan Occupied Kashmir (PoK), in the face of strong objections by India. Moreover, China has even welcomed high-level politicians from the PoK to Beijing. So closer ties with Taiwan would be entirely appropriate, in light of China’s extensive links with PoK and its leaders.
The US is meanwhile planning to use Taiwan Superconductor Manufacturing Company, the main chipmaker for Apple Inc, to shift its high-tech manufacturing to Arizona, in order to actively exclude Huawei from any major global role. The UK and other European countries will likely follow suit. It would also only be appropriate if Indian companies sign agreements for large projects in areas like computers, communications and other electronic industries, including facilities for manufacturing key strategic items like semiconductors and computer chips, with companies in Taiwan.

India has now shed its earlier inhibitions about security partnerships with countries in its Indo-Pacific and Indian Ocean neighbourhood. China has serious differences on its maritime boundaries with virtually all its neighbours, including Vietnam, South Korea, Japan, Taiwan, the Philippines and Malaysia. India has not yet been able to respond in any appropriate or meaningful manner to the continuous supply of weapons, nuclear weapons designs, ballistic missiles, fighter aircraft and warships by China to Pakistan. There is a strong feeling in India that the time has come for New Delhi to respond positively to requests from Vietnam, a good friend with a remarkably fast-growing economy, with the supply of weapons systems like Brahmos Missiles, to enable Vietnam to counter Chinese maritime threats. India will hopefully discard its old reservations by expanding military cooperation with friendly regional countries like Vietnam.

Nevertheless, military and diplomatic consultations between India and China are continuing on an almost daily basis. Russia’s President Putin appears keen to see that differences between the two countries are sorted out, while Foreign Minister Sergei Lavrov publicly urged reconciliation when he met his Chinese and Indian counterparts recently. Russia appears to be emerging as a facilitator, urging reconciliation between New Delhi and Beijing. Moscow is looking carefully at the US-Japan-Australia-India ‘QUAD’ grouping, whose members are expanding cooperation on maritime security in the Indo-Pacific. New Delhi, however, would like to see a situation where China accepts and respects national borders, and stops backing political parties and leaders who are not friendly to India, all across its land and maritime frontiers.

G . Parthasarathy, a career Foreign Service Officer , is currently Chancellor of the Central University of Jammu and Visiting Professor at the Centre for Policy Research in New Delhi, as well as President of the India Habitat Foundation. He previously served as Ambassador of India to Myanmar , High Commissioner of India to Australia, Pakistan and Cyprus, and Spokesman of the Prime Minister’s Office
Please follow and like us: