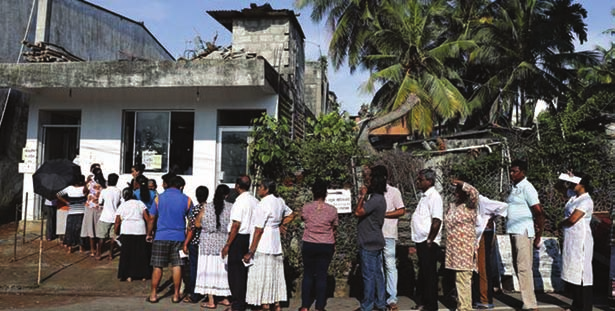 Battered by the coronavirus pandemic and a struggling economy, Sri Lanka is poised for an election like no other.  Neville de Silva reports

It has never happened before. Since independence in 1948 Sri Lanka has held parliamentary elections regularly to elect its legislature. From 1978, when a new constitution was adopted, it has also held separate nationwide polls to elect its executive president. Specific legally binding laws approved by parliament determined how such elections should be conducted and what penalties awaited violators.

But the August 5 election, which has already been postponed a couple of times due to the coronavirus pandemic, is going to be like no other. It will be held under two laws – the law that relates to national elections, and one issued in late July by Extraordinary Gazette on health rules and precautions to be observed at and around election time.

While these precautionary measures are intended to curb a further spread of COVID-19 –which the Sri Lankan health authorities thought they had under control but which continues to be brought into the country by repatriated migrant workers, mainly returning from Gulf states –the Health Ministry has been accused of bending or omitting some of the rules and regulations announced in June pertaining to the election.

Some suspect this has been done to satisfy the Sri Lanka Peoples Front (SLPP), led by the Rajapaksa family and expected to win the election handsomely. But criticism over tinkering with the health guidelines for the August election has been compounded by a spat between the Public Health Inspectors (PHI) union and the Health Ministry.

The Public Health Inspectors, who deal with health issues at ground level, recently announced that its members have pulled out ‘not only from COVID-19 related duties but all activities related to communicable diseases, including dengue control’.

This ongoing disagreement with the health authorities is over the PHIs not being recognised as legally authorised officers by gazette notification under the ‘Quarantine and Prevention of Diseases Ordinance’, without which the PHIs could face legal problems, as some members fear.

Meanwhile, among the charges made by one of the Election Monitoring bodies over relaxation of previously announced guidelines are the following: the maximum number of persons permitted to attend an election meeting having been increased from 100 to 300, and 500 if the party leader is attending it; the maximum number of persons permitted to engage in door-to-door campaigning increased from three to five; and the omission of previous guidelines relating to the checking and bundling of ballot papers at District Returning Offices.

Whether the issue of PHIs will be resolved or any of the relaxations to the health regulations tightened, as originally intended, seems doubtful. If at all, the health inspectors might be provided with legal cover to allow them to resume duties.

What is so extraordinary about the 2020 election is that politics and the election of a new parliament have been overshadowed in the public mind by fears of contracting the coronavirus during voting.

The recent and sudden spike in COVID-19 cases jolted the government and plunged Sri Lankans into a state of confusion. These concerns were reflected at the weekly ministerial meeting, where Prime Minister Mahinda Rajapaksa acknowledged that people were frightened by the new developments.

But later he told media editors that the health authorities were confident the recent spike could be managed.

However, these fears could well affect voter turnout which has, over decades, been one of the highest in the democratic world. Since Sri Lankans have exercised the franchise since 1931, when it was first granted by colonial Britain, voter numbers have been very high, especially since the 1970s, when figures frequently reached around 78% and often even more.

What worries contending political parties is who will be most affected by a poor voter turnout. The Rajapaksa-led SLPP, which is heavily tipped by public opinion to top the polls, is striving for a two-thirds majority in parliament. This will allow President Gotabaya Rajapaksa to push through his political agenda, including dumping the 19th constitutional amendment that transferred several powers of the president to the legislature and the prime minister and set up several independent bodies to make appointments to senior positions.

Besides, the president hopes to consolidate power with a pliant legislature. Some political and civil society circles entertain fears that he intends running what some wish to describe as a ‘parallel government’.

Such criticism is based on the president recruiting retired military officers and buddies to the administration to head several key civilian organisations and institutions, as well as setting up ‘task forces’ consisting essentially of ex-military officers not accountable to any legislative body and answerable only to the president.

During Mahinda Rajapaksa’s second presidential term from 2010, there was increasing public anger and resentment over bribery, corruption and nepotism. This led a learned and highly respected Buddhist monk, Venerable Maduluwawe Sobitha Thera, to launch an island-wide movement to cleanse Sri Lanka of its long persisting political evils and restore genuine democracy.

This captured the imagination of the people, who launched themselves with vigour into a campaign that would see a shifting of the country’s political tectonic plate, culminating in the August 2015 defeat of Mahinda Rajapaksa at the presidential election, followed by his party losing a few months later at the parliamentary polls.

Had the momentum of Ven. Sobitha’s vision of a free, just and transparent society been maintained and the political pledges made at the elections fulfilled, Sri Lanka might have made a fresh start.

But politicians being politicians, the two party leaders who agreed to co-habit, holding the presidential and prime ministerial positions, made a hash of governance during their five-year term.

With the internal squabbles between President Maithripala Sirisena and Prime Minister Ranil Wickremesinghe reaching unbearable heights, the president dissolved parliament and ousted his prime minister from office, only to be rejected by the Supreme Court in late 2018 as unconstitutional.

This breakdown in governance and the shambles that followed played into the hands of Gotabaya Rajapaksa and his phalanx of Buddhist monks, retired military officers and businessmen who were demanding strong leadership, particularly after the 2019 bombings by Islamic extremists of churches and hotels in Sri Lanka, in which 270 people died.

That outrage hardened the resolve of the Sinhala-Buddhist voters to throw their weight behind a tough ex-military officer who is one of those credited with having been in the forefront of the victorious war against the separatist Tamil Tigers.

Now the political tectonic plate is likely to be pushed back in another direction as new political ideologies take precedence and law and order becomes the standard bearer. But domestic re-adjustment alone will not help with the tough challenges ahead.

Even before the coronavirus struck, Sri Lanka was in the throes of an economic crisis, especially over its diminishing external reserves. From its mounting external debt $2.9 billion is due this year.

The continued deterioration of the balance of payments in the second half of the year would diminish foreign reserves to a critically low level by the end of the year and pose a severe threat to the economy.

‘The only way out of this external vulnerability is through foreign assistance by way of aid, concessional loans and moratoria on debt repayment,’ wrote the Sunday Times’ Economics Correspondent.

Sri Lanka has for some time relied heavily on Chinese loans and credit for mega infrastructure projects. As the Indian Ocean fast turns into a military playground for regional powers and those outside forming alliances to curb China’s military expansion into the ocean, countries such as Sri Lanka, located in the vital waters and long reliant on Beijing, will need to play a deft hand in the growing geostrategic game.