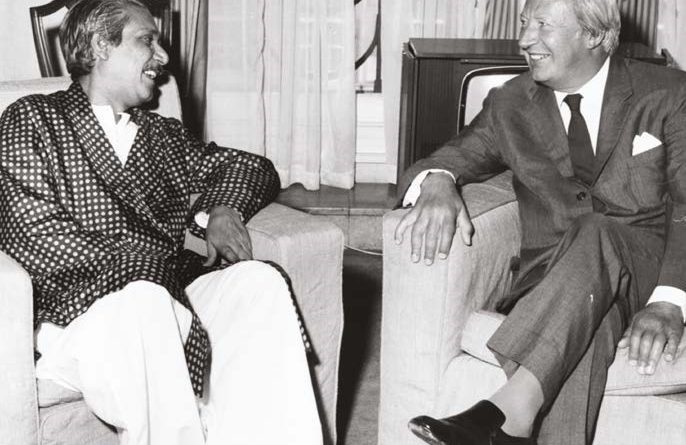 Mujib and Britain: A special relationship

The historic trip by Bangabandhu Sheikh Mujibur Rahman to Britain in 1972 helped establish his international reputation as ‘Father of the Nation’ of Bangladesh, even before he had ever set foot in his liberated homeland. He managed to win over the international media and the British Prime Minister during a short visit which, writes. Duncan Bartlett , had significant historical repercussions

The British authorities were taken by surprise when Bangabandhu Sheikh Mujibur Rahman arrived in London on 8 January 1972.

News that he was on his way from West Pakistan, where he had been held captive, did not reach Britain until his flight was in the air. When told of the news, the British Foreign and Commonwealth Office dispatched a senior diplomat to meet Mujibur in the VIP lounge at Heathrow airport.

Britain’s Prime Minister, Edward Heath, was on holiday at the time. Yet he felt the unexpected visitor was so important that he cancelled his break and quickly arranged to host talks at Number 10 Downing Street. The discussion took place that same evening.

At that stage, Mujibur had never set foot in an independent Bangladesh, even though he was its elected prime minister. This was because during the previous spring, he had been arrested and flown out of the region, after encouraging an uprising against the occupying forces of West Pakistan.

During the time of his confinement, many Bengalis joined the resistance and, assisted by the Indian Armed Forces, they defeated the Pakistan Armed Forces during the Bangladesh Liberation War of 1971.

On 16 December that year, the Pakistani Army surrendered to a joint force of Bengali resistance fighters, known as Mukti Bahini, and the Indian Army. Mujibur was released from jail on 8 January 1972, and boarded the plane for London the same day.

The meeting between Mujibur and Heath was not particularly lengthy but we know what was discussed in some detail, thanks to a statement made about it in parliament and a letter which was sent by Heath to the US President, Richard Nixon.

From those sources, we learn that Mujibur made some striking requests. With the benefit of historical hindsight, it is interesting to note that most of them were accepted fairly swiftly.

His first request was that, following Bangladesh’s successful liberation war with West Pakistan, Britain should recognise it as an independent nation. Less than a month after the meeting, on 4 February 1972, Britain became one of the first countries to do so, a move that encouraged other Commonwealth and Western powers to follow suit.

Mr Heath told the House of Commons: ‘When Sheikh Mujib came to see me at Number 10, I explained to him that our policy was to try to get good relations between the three countries in the Indian subcontinent. We would do our utmost to help Bangladesh in the present situation.’

Another of Mujib’s requests was for Britain to apply pressure on the Americans to also offer diplomatic recognition to Bangladesh. This was a tall order because, although Britain and the United States were, then as now, loyal allies, the US administration had wholeheartedly sided with West Pakistan during the Liberation War.

Heath therefore wrote to Nixon, asking not only that the US acknowledge Bangladesh as an sovereign state, but also that it help convince Pakistan’s new leader, Zulfikar Ali Bhutto – who had seized power by overthrowing President Yahya Khan a few days after the Pakistan army’s defeat in the Bangladesh Liberation War – to do the same.

‘Anything which you can do to help Bhutto accept the inevitability of recognition of Bangladesh would be most helpful,’ Heath wrote to Nixon. ‘I am myself in touch with him and have told him that Mujib, in his talk with me, ruled out any formal link between East and West. But your views will, I know, weigh heavily with Bhutto and his government.’

America duly offered recognition to Bangladesh in the spring of 1972, with Pakistan going on to do so in 1974. However, Pakistan’s acceptance of Bangladesh was not primarily due to British or American influence. In fact, it came under great pressure to do so from mainly Muslim nations. Pakistan also took the pragmatic view that this was probably the best way to deal with the legacy of the fighting, and to resolve disputes over issues such as the exchange of prisoners of war.

Once Pakistan took the step of acknowledging Bangladesh in 1974, it not only paved the way for future cordial relations, it also enabled Bangladesh to become a member of the United Nations.

Before Mujibur returned to Bangladesh on a British Royal Air Force comet jet on 10 January 1972, he held a press conference at Claridge’s hotel in London. He also gave some TV interviews, including one to the well-known presenter David Frost. Naturally, he was asked many questions about the situation in Bangladesh but his knowledge of events in the region must have been very limited, as he had been held not only in prison but in solitary confinement in Pakistan until soon before his trip to London.

Nevertheless, he seemed to captivate the press and this may have been a factor in convincing Edward Heath to push the Bangladesh cause at an international level. Ever since then, the United Kingdom has been a critical partner of Bangladesh, seeking to support peace and prosperity for its people and to urge the rest of the region to respect the country’s independence.