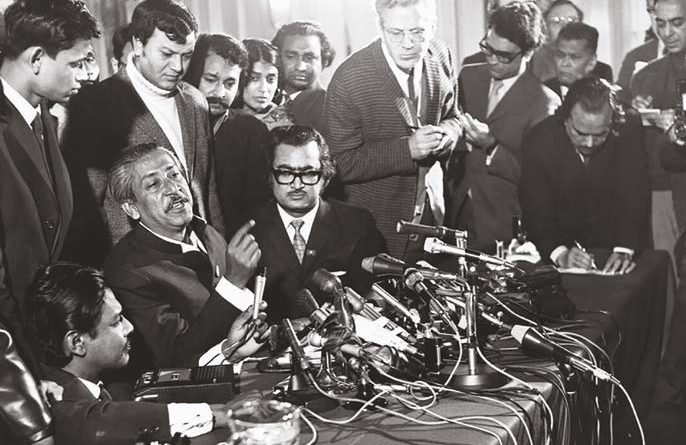 Mujib and the media

In recalling his own journalistic experience of Bangladesh’s charismatic founder and leader,  William Crawley reflects on perceptions of ‘Bangabandhu’ in the British and global press

This year, 2020, we commemorate the anniversary of Sheikh Mujibur Rahman’s birth one hundred years ago. The events which gave him an indelible place in history as the father of Bangladesh as an independent nation took place just under 50 years ago. They will no doubt be marked, celebrated and assessed afresh over the coming months by new generations of Bangladeshi nationals, born after Sheikh Mujib’s death. Scholars and analysts of Asian and international affairs will again be reassessing his legacy. The emergence of an independent Bangladesh was without doubt, as Sheikh Mujib himself recognised, the high point of that legacy and the one of which he was most proud.

As a new recruit to the BBC External Services radio services (better known as the BBC World Service) in November 1970, I had a small part in the reporting of the events which marked Sheikh Mujib’s crowning achievement,  and in analysing the events that followed up to and beyond his assassination. I did not know him personally, but I saw his public and political personality in action at an election rally is Narayanganj in 1973 and I took part in an interview with him for the BBC Bengali service on one occasion when he was passing through London as prime minister.  I was able to see the charisma that he brought to his nationalist convictions and aspirations, and the admiration he inspired in his followers.  What I can bear witness to is the way Sheikh Mujib emerged from the relative obscurity of a provincial East Bengali politician within the context of Pakistan, into the international limelight.  He shattered Mohammed Ali Jinnah’s dream – and 24-year achievement – of a united Pakistan. It is worth recalling the coverage of these momentous events in the British media, and the people who contributed to the BBC’s reporting at the time.

The unfolding crisis had begun with a natural disaster, the cyclone which devastated East Pakistan in November 1970. The BBC’s man on the spot in Dhaka when the cyclone struck was A.B.M. Musa. Musa was attached to the BBC External Services newsroom, not to the Eastern Service of which the Bengali Service was a part, though both were based in Bush House in Aldwych, a building now occupied by King’s College, London University.  The BBC was the first to report that there had been a disaster in the coastal area of East Bengal. Many years later Musa recalled that as the moment when the popularity of the BBC in Bengal really started to increase. Brian Barron, a very experienced foreign correspondent, was sent to Dhaka from Singapore to cover the story. The extent of the devastation and the inadequacy of the relief effort was extensively covered in the international media. It was by no means the first such disaster in East Bengal and the political implications were far-reaching.

The election in December 1970 and the decisive victory in East Pakistan of Mujib’s Awami League underlined a wider importance of the BBC. ‘Sheikh Mujibur Rahman… was introduced to the world by the BBC,’ recalled Musa, who was at that time also correspondent of The Times (London) and The Sunday Times, and through them was appointed to the then newly established Asian News Service based in Hong Kong.

Sheikh Mujib’s arrest, and the crackdown on society and political activity by the military regime in East Pakistan in March 1971, made him even more of a household name in the international media.  Of the British journalists, Simon Dring of the Daily Telegraph had managed to evade the expulsion of foreign correspondents, reporting on events for his paper and for the Washington Post for several days. Martin Adeney had been in Dhaka for The Guardian, while Peter Hazelhurst covered phases of the story for The Times. The Pakistani journalist Anthony Mascarenhas, sent by the Pakistan government to report on the situation, defected and wrote a powerful first-hand exposé of the army repression for the Sunday Times. The distinguished American correspondent Murray Sayle some weeks later wrote an influential report in the same paper. The BBC World Service and the Bengali Service interviewed others who had managed to leave East Pakistan and their testimony both undercut local censorship and internationally added to a damning picture of the Pakistani army’s role.

In London there was frenetic activity by multiple disparate groups of Bengali supporters of an independent Bangladesh. At a meeting in London, Justice Abu Sayeed Chowdhury, Chancellor of Dhaka University and later President of Bangladesh, became the standard bearer for many of these groups who had converged on the capital. It is interesting that Sheikh Mujib’s unfinished memoirs, written in 1967, mention Justice Chowdhury’s role in 1946 and 1947 as a prominent student leader who was respected as a mediator between rival factions of the Muslim League in Bengal.  Justice Chowdhury had been at a meeting in Geneva at the time of the crackdown and had been so appalled at the killing of students that he came to London and declared his support for the Bangladesh movement. Packed meetings were held in support of Bangladesh involving senior British political figures such as the veteran socialist Fenner Brockway and Peter Shore, both former Labour ministers. The Scottish Liberal MP Russell Johnston spoke in parliament. Elsewhere, Sheikh Mujib – in jail and incommunicado n Pakistan – was proclaimed interim President of Bangladesh and titular head of a government in exile. The headquarters of that government was said to be in ‘Mujibnagar’, which we believed to be a largely mythical place either on Indian territory or on Bangladeshi territory under Indian control. The BBC followed these events closely and reported them to East Pakistan and to the world. A flood of Bengali refugees into India over the months that followed kept the story in the international headlines.

Musa’s successor as BBC correspondent, Nizamuddin, reported on events in Bengal as far as he could, though for his own protection his name was not attached to the dispatches when broadcast. That precaution proved tragically inadequate. Nizamuddin was killed along with a group of prominent Bengali intellectuals by irregular Pakistani militias known as Al-Badr or razakars, on the eve of the capture of Dhaka by the Indian army and the Bengali Mukhti Bahini in December 1971.

The 1971 war between India and Pakistan and the defeat of the Pakistan army seemed to many observers at the time to have already made Sheikh Mujibur Rahman, isolated as he was, a part of history, barely relevant to what had become an international conflict.

His release and flight to London on 8 January 1972, in a Pakistan |International Airlines (PIA) plane, arranged by the new leader of West Pakistan Zulfiqar Ali Bhutto, restored him immediately to the centre of the political stage. After meetings with the British Prime Minister Edward Heath and Harold Wilson,  then Leader of the Opposition Labour Party, and a meeting with the Indian High Commissioner Apa Pant, Sheikh Mujib gave a memorable press conference at Claridges Hotel, in which he was questioned in detail about his present position and that of an independent Bangladesh.

My BBC colleague Serajur Rahman crouched next to Sheikh Mujib throughout the press conference, holding a microphone to ensure that the BBC could record and broadcast the historic occasion. To his and our dismay, he discovered when he returned to the BBC studios in Bush House that he had forgotten to switch the microphone on and the tape was blank.

A puzzle to us in the BBC and other news organisations at the time was to what extent Sheikh Mujib could have been briefed after his arrival in London as to what had happened during his incarceration. We believed that he had known very little.  Before his arrest he had been negotiating on the basis of provincial autonomy for East Pakistan.  Although he had written a declaration of Bangladesh’s independence before he was arrested, he had no idea whether it had reached his followers or whether it had been acted on. He had been declared interim President by the Mujibnagar government in exile, though his preference was for a parliamentary system of government in which the Prime Minister rather than a President headed the government. He only had a few hours to absorb the implications of the situation and to confirm his own attitude towards them. Later, a respected Bangladeshi journalist wrote in a Dhaka newspaper that some BBC journalists had spread ‘untruthful’ reports about this in order to diminish Sheikh Mujib’s authority and credibility. This was certainly not the case.  Whether he had been incompletely briefed or not, it was no reflection on his standing as a leader. Sheikh Mujib’s unfinished memoirs do not cover that transformative moment in his political career.

Some of the interviews that Mujib gave after his release are available now on YouTube. A pooled TV interview with a correspondent for the Associated Press shows Mujib smoking his pipe in what we may now think of as a quintessentially English fashion. I was told by my Bengali colleagues that he had always ordered his favorite brand of tobacco, St Bruno, from suppliers in London. In a later interview, he spoke to David Frost, then at the height of his TV career in Britain and the USA as a television news anchor.  Mujib spoke quite emotionally about the ups and downs of his political career. My own impression of that interview at the time was that for a leader who had built his early career on the promotion and  advancement of the Bengali language, it was a shame that he chose to be interviewed in English rather than Bengali with an interpreter. He was, of course, fluent in English but not such an effective speaker in that tongue, and he had a dramatic story to tell.

Sheikh Mujibur Rahman’s death, and those of close members of his family, in August 1975 at the hands of assassins from within the Bangladesh army was brutal. But it did not overturn his legacy of independence for Bangladesh.

William Crawley is a Senior Research Fellow at the Institute of Commonwealth Studies, University of London. A version of this article appeared in the Commonwealth Opinion section of the ICS website in March/April 2020