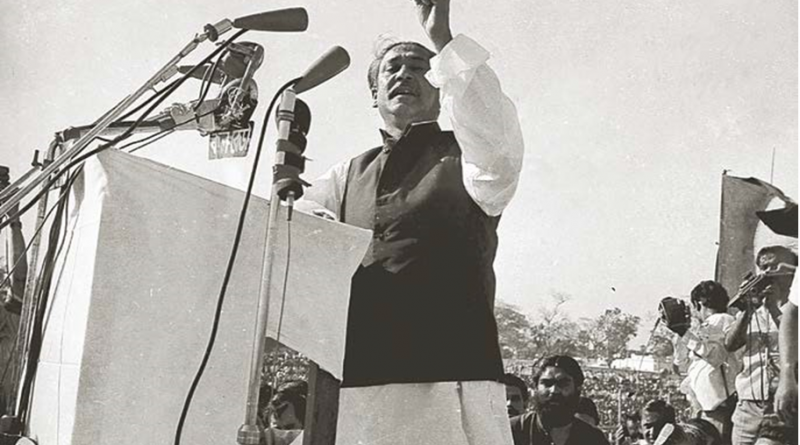 Remembering the liberator of a nation

On the centenary of Bangabandhu’s birth, Humphrey Hawksley looks back on the triumphs, and the struggle of the Father of the Nation of Bangladesh

Had he lived, Sheikh Mujibur Rahman would have turned 100 this year and proudly seen his daughter Sheikh Hasina at the helm of his country, navigating it impressively through the complexities of the 21st century.

But Mujib survived barely four years from his independence victory in 1971 to his horrific assassination, together with most of his family, in 1975.

Fondly nicknamed ‘Bangabandhu’ or friend of Bengal, his story is one of a young, charismatic campaigner, of political determination betrayed by democratic failure of post-colonial Pakistan. Mujib’s imprisonment, failed negotiations, allegation of conspiracy and intrigue, and final triumph in making his nation independent, unfortunately, led to an end of his political government in a nascent Bangladesh and beginning of a military autocratic era.

At its heart lies Britain’s flawed partition of India along religious grounds. In 1947, a rush political decision pushed through an idea that, because swathes of eastern and western colonial India were Muslim, they could happily form one nation.

Omitted from the calculation was that Dhaka and Islamabad lay 1000 miles apart, that Islam itself would not be enough to forge unity of purpose between a Bengali Muslim and a Sindh Muslim, and that India would do nothing when given the chance to encourage a split within its hostile neighbour and help create a friendly Muslim nation on its eastern flank.

Mujib was born into neither power nor privilege. His father, Sheikh Lutfur Rahman, was a court clerk in Gopalganj, a rural area about 150 miles south of Dhaka. At the age of 18, in an arranged marriage, he wed Begum Fazilatunnesa, a young girl at that time. She later gave birth to two daughters and three sons.

Mujib, a lanky and sporty child, loved the outdoors and stories abound of his campaigning spirit from an early age. He led demands to have the cracked roof of his school repaired and, during food shortages, distributed his own family’s rice to starving people in the neighbourhood.  While an undergraduate student in Calcutta, Mujib also served as volunteer during the great Calcutta riot. When studying law at the University of Dhaka, he was expelled for inciting unrest against college regulations.

Undeterred, Mujib went on to set up and agitate in a series of organisations, culminating in the founding of the Awami Muslim League in 1949. He won his first parliamentary seat in 1953, giving him a base from which to see through his campaign for self-rule.

Three years later, following Pakistan’s first military coup, Mujib found himself under arrest. By the time he was released in 1961, he had firmed up his end goal and honed a strategy.

Former Indian diplomat Shashanka S. Banerjee has written of a secret meeting he held with Mujib on Christmas Eve 1962. Mujib handed him a letter for Prime Minister Jawaharlal Nehru, asking for India’s help in his independence struggle.  Banerjee queried Mujib’s Plan B should India refuse, to which he replied there was none.  A negative response from India was not an option.

In 1966, Mujib put forward a six-point plan for Islamabad to give East Pakistan greater autonomy over most of its governance, except for defence and foreign affairs.  It was rejected.

Then, in 1970, Mujib obtained a stunning electoral victory. By now the Awami Muslim League had been renamed simply the Awami League and it won an overall parliamentary majority in Pakistan, securing 167 seats out of 313.  The party also secured all but two of the 300 seats in the East Pakistan provincial assembly.

Mujib should have been set to become prime minister. But the result was unacceptable to Islamabad’s military and political establishment, which itself was in flux.

Notably, the future prime minister Zulfikar Ali Bhutto refused to work as Mujib’s deputy, despite his Pakistan People’s Party only winning half the votes gained by the Awami League. Bhutto insisted Mujib join a coalition.

Protests mounted and on 25 March, Islamabad sent in the military under Operation Searchlight to repress dissent.  Mujib was once again arrested immediately after declaring Bangladesh’s independence and calling upon his people to fight until the end to free Bangladesh from occupation army. Bangladesh’s war of independence had begun, which international media termed as genocide of Bengali people.

With help from India, for which Mujib had laid the ground in 1962, and only after horrific cruelty and loss of life of millions, Islamabad was defeated. The surrender was signed on 16 December 1971 in the gardens of Ramna Race Course where, nine months earlier, Mujib had given his rousing speech.

The agony surrounding the birth of Bangladesh became synonymous with suffering within the developing world.  Musicians George Harrison and Ravi Shankar organised the Concert for Bangladesh in New York’s Madison Square Gardens in 1971, the first music fundraising event, which was later followed by Live Aid for Ethiopia and others.

Under international pressure, Mujib was released and, in early 1972, was flown by a British Royal Air Force plane to Dhaka where he received a rapturous welcome by crowds estimated at well over a million.

It was then that his job switched from being inspirational campaigner to government administrator, a near impossible demand that Mujib had to handle in the face of numerous of post-war country.

Popular rebellions are built on promises and those taking part too often envisage instant change. Newly independent Bangladesh was beset with similar challenges which soon led to dissent, including an emboldened left-wing insurgency.

His most serious mistake was placing too much trust on some of his confidants. They eventually collided with derailed fractions of the army, which began hatching plans for a coup d’état.

According to American diplomat Stephen Eisenbraun, when, in late July or early August 1975, the US ambassador warned Mujib to be careful, the Bangladeshi leader replied, ‘Don’t worry. I know my people. They love me and everything’s under control.’

He was fatally wrong.

On the night of 15 August, mid-career army officers murdered Mujib in his house, together with his wife, three sons and others, including his servants.  His daughters Sheikh Hasina and Sheikh Rehana escaped the same fate because they were in West Germany at the time.

The level of violence rocked the new nation and ushered in an era of coups and counter coups which kept Bangladesh poor and unstable. Mujib’s 12 known assassins were rewarded with government and military jobs.

There was little semblance of democracy until after the ousting of the military leader President Hussain Muhammed Ershad in 1990 through a popular uprising led by the Awami League and the Bangladesh Nationalist Party, led by Khaleda Zia.

After 21 years, Mujib’s Awami League came back to power with is daughter Sheikh Hasina becoming the Bangladesh’s prime minister in 1996 to carry on his legacy.

In 1998, Mujib’s killers were finally sentenced to death in absentia. Five are still at large. One died in Zimbabwe in 2001. Five were executed in 2010. The latest, Abdul Majed, was arrested in Dhaka on 7 April this year and went to the gallows a few days later on 11 April.

Ms Hasina’s administration described the execution as a ‘gift’ for Bangladeshis on the 100th anniversary of her father’s birth, considering that indeed he was the liberator of Bangladesh and its founding father.

Humphrey Hawksley is a former BBC Asia Correspondent and Beijing Bureau Chief. An updated and expanded version of his latest book, Asian Waters: The Struggle Over the Indo-Pacific and the Challenge to American Power, is published by Abrams Press