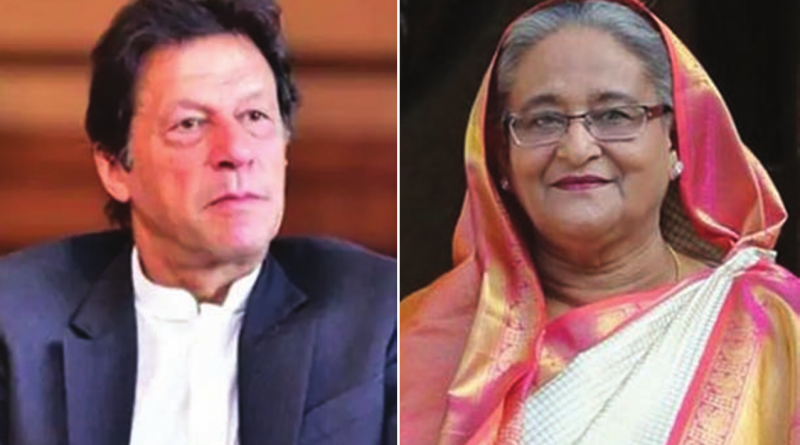 Thaw after the frost?

The recent phone conversation between Pakistan’s Prime Minister Imran Khan and Bangladesh’s Premier Sheikh Hasina Wajid was both rare and surprising, as the two countries are not on friendly terms and their interactions are few and far between.

While the timing took many by surprise, the communication obviously didnot happen spontaneously. From all appearances, it was Pakistan that took the initiative to break the ice as Bangladesh had shown no visible interest in taking steps to mend their strained ties.

It would be wrong to assume that one phone conversation alone will lead to a breakthrough in the relationship and put Pakistan and Bangladesh on the path to friendship after years of estrangement. By describing the talk as a ‘courtesy call’, Bangladesh may even have intended to downplay its importance. Nevertheless, this interaction at the highest level was of some importance, as the two prime ministers shared their experiences in fighting COVID-19, discussed the issue of debt relief for poor and underdeveloped countries, and expressed commitment to the South Asian Association for Regional Cooperation (SAARC) to bring about enhanced collaboration for sustainable peace and prosperity.

If she were to visit Pakistan, Hasina Wajid would have to consider the likely domestic reaction

Imran Khan extended an invitation to his Bangladeshi counterpart to visit Pakistan, though there is no word on whether she accepted the invitation. It would require a greater effort to convince her to come to Pakistan, as an earlier invitation by Islamabad didnot receive a positive response. If she were to visit Pakistan, Hasina Wajid would have to consider the likely domestic reaction. She would also need to keep an eye on the reaction in India, which has hostile relations with Pakistan. Indeed, India was instrumental in helping Bangladesh win independence from Pakistan by assisting what was then East Pakistan, training and equipping Mukti Bahini, the militia which spearheaded the fight against the Pakistani security forces. The Indian military intervention in 1971 led to mass surrender by the trapped Pakistani forces, who were unable to get reinforcements from faraway West Pakistan, and it was several years before these prisoners of war were released.

There has been speculation as to how and why the two prime ministers decided to talk now, albeit by phone. (A face-to-face meeting was out of the question anyway, as state-level visits between the leaders of the two countries have not taken place for so long and would require lot of groundwork. Also, the coronavirus pandemic has restricted travel so virtual interactions are now the preferred mode of communication.)

In fact, the phone conversation became possible after a rare meeting in Dhaka in early July between Pakistan’s High Commissioner to Bangladesh, Imran Ahmad Siddiqui, and Bangladesh’s Foreign Minister, A K Abdul Momen. It is believed this set the ball rolling for the phone call between Hasina Wajid, a seasoned politician who has ruled Bangladesh for a number of years, and Imran Khan, who had spent 22 years in the political wilderness before being elected as prime minister in July 2018.

The bitterness in Bangladesh-Pakistan relations can be understood in light of Dhaka’s20-month refusal to approve the appointment of Pakistan’s high commissioner. Then, in November 2019, Bangladesh finally agreed to accept Imran Ahmad Siddiqui as the high commissioner and let him take charge of Pakistan’s mission in Dhaka in January 2020. This was some achievement, given that the relationship has been mostly hostile due to past events.

Part of Pakistan since independence from British colonial rule in 1947, the Bengalis inhabiting East Pakistan had gradually harboured feelings of alienation and neglect at the hands of West Pakistan, which was dominated by Punjab. Injustices imposed on East Pakistan, despite the majority of the population living in this part of Pakistan, angered politically conscious Bengalis. The government decision in the early years of Pakistan’s independence to declare Urdu the official national language also incensed the Bangla-speaking Bengalis, triggering riots in Dhaka and elsewhere in East Pakistan. There was also a sense that East Pakistan was largely left undefended during the wars with India.

As the grievances mounted and military rulers, along with the civilian elite, ignored East Pakistan’s complaints, nationalist sentiment swept through the Bengalis, culminating in the 1970 general election, in which the Awami League – the party of Hasina Wajid’s father, Sheikh Mujibur Rahman – won all but two of the National Assembly seats in Pakistan’s eastern wing. But military ruler General Yahya Khan, with the support of the runner-up Pakistan People’s Party, led by Zulfikar Ali Bhutto, prevented Mujibur Rahman from forming the government as the head of the majority party in the National Assembly. Failure to resolve the political crisis led to the use of force by both sides as the military tried to crush the guerilla warfare being waged by the India-backed Mukti Bahini. Mass arrests, including that of Mujibur himself, and large-scale migration of Bengalis to India took place and New Delhi was handed an opportunity to militarily intervene in East Pakistan.

Such a history cannot easily be forgotten, though Pakistan did later release Mujibur Rahman, and he returned to Dhaka as the founder of Bangladesh. Pakistan also recognised Bangladesh as an independent state as it tried to put the past behind it.

In recent years, relations reached a new low when Pakistan protested the decision by the Hasina Wajid government to try several elderly leaders of the Jamaat-i-Islami for war crimes committed in 1971. The group was once pro-Pakistan but, since Bangladesh’s independence, it had been functioning as a chapter independent of the Pakistani unit and contesting elections. Although the demands of justice were not fulfilled during the trials, which were criticised by international human and legal organisations, the court ordered the execution of the accused after summarily convicting them. Pakistan called the trials politically motivated and accused Dhaka of violating the trilateral 1974 agreement between Bangladesh, India and Pakistan, under which all countries, including Bangladesh, agreed not to pursue cases against people involved in the events of 1971. Pakistan’s National Assembly’s unanimous resolution in 2016, condemning the executions of the Jamaat-i-Islami leaders, further angered Bangladesh.

It is clear Hasina Wajid is pro-India and her party is indebted to New Delhi for enabling the creation of Bangladesh and providing economic assistance. The opposition Bangladesh Nationalist Party (BNP), founded by President General Ziaur Rahman in September 1978 and now led by his widow, Khaleda Zia, has never been as pro-India as the Awami League. However, it has no real chance of winning power in the coming years as its leaders are jailed, and the party is in disarray.

There have been a few occasions when Indo-Bangladesh relations suffered a setback due to border issues and the presence of Bangladeshi migrants in Assam and other Indian states. The decision by Prime Minister Narendra Modi’s government to enact the controversial Citizenship Amendment Act (CAA) last year caused big protests in Bangladesh, as it affected its citizens who had long ago migrated to India.

The China factor in this situation also cannot be ignored. China managed to persuade Bangladesh to become part of the Belt and Road Initiative (BRI), which is opposed by India, and offered investment, economic partnership and zero tariffs on Bangladeshi exports. This seems to be causing a change in the previously steadfast pro-India policy of Bangladesh. As China is close to Pakistan, it is possible Beijing will play a role in overseeing an improvement in relations between Dhaka and Islamabad.