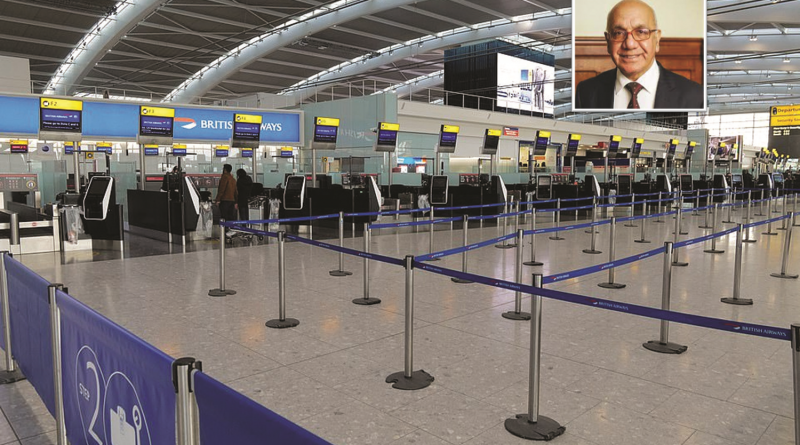 As the aviation industry faces unparalleled challenges, Labour’s  Virendra Sharma and other MPs urge the UK government to help all the country’s beleaguered airports and those whose livelihoods depend on them

Labour MP Virendra Sharma and nearly 30 other British parliamentarians have written an urgent letter to UK Chancellor of the Exchequer Rishi Sunak, demanding financial support for airports such as Heathrow, where tens of thousands of employees face redundancy following the coronavirus pandemic’s catastrophic impact on the global aviation industry.

With thousands at risk of job losses in the wake of plummeting passenger numbers, the MPs called on the Chancellor to bring in crucial changes to the existing system, whereby airports in England and Wales are expected to pay business rates as though they are functioning normally. This is in contrast to airports in Scotland and Northern Ireland, which have been allocated funding from their devolved governments to help bolster them during the crisis.

‘Under the current system, while a business such as Tesco – which has seen growth during COVID-19 – has received £585 million in business rate relief, our airports have seen not a penny,’ wrote Sharma and his fellow MPs. They went on to call for the government to ‘provide support to all English and Welsh airports in line with that afforded by Scotland and Northern Ireland. This will allow airports to continue to employ people, pay other taxes and support the COVID recovery we all so badly need.’

Virendra Sharma – who hails from Punjab’s Jalandhar district and has been the Labour MP for London’s Ealing Southall constituency since 2007 – highlighted the fact that passenger numbers have fallen drastically – by as much as 99 per cent in some cases – leaving more than 100,000 workers in the UK aviation industry facing the risk of unemployment. The industry lost nearly £2 billion in the four-month period between March and June, which, Sharma noted, is equivalent to a loss of around £15 million per day.

Heathrow, usually one of the world’s busiest airport hubs, has historically employed a large number of Indian-origin people, who took up residence in nearby London suburbs including Ealing, Southall and Hillingdon. Pre-COVID, it generated £9.7 billion to the UK’s Gross Value Added income and supported around 190,000 jobs across Britain, directly employing some 84,400 people and hosting 320 businesses – making it the largest workplace in Europe.

Westminster’s inaction on the issue is in stark contrast not only to the job-saving measures taken by the governments of Scotland and Northern Ireland, but also to those of other countries such as Germany, Spain and the Netherlands, in relation to their aviation sectors.