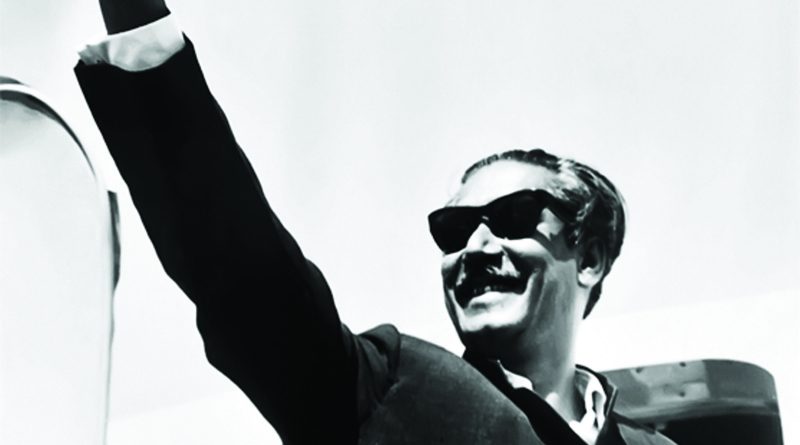 Bangabandhu: the road to secularism

Syed Badrul Ahsan reflects on what led Bangladesh’s founding father away from communalism, and why his secular message is as relevant today as ever.

Seventy-three years after the violent partition of India and 45 years after his assassination by renegade soldiers in Dhaka, Sheikh Mujibur Rahman, the founding father of Bangladesh, dominates the lives of his fellow Bengalis as never before. At the root of this influence are the political principles he brought into his politics during the 23 years Bangladesh was part of Pakistan, and in the three-and-a-half years he governed Bangladesh, from its emergence as an independent nation until his death.

In recalling his achievements and legacy, a comparison between Mujib – fondly known as Bangabandhu – and the founder of Pakistan, Mohammad Ali Jinnah, seems a good place to begin.

Sheikh Mujibur Rahman differs from Mohammad Ali Jinnah in various important ways. Whereas Pakistan’s founder made his entry into politics as a thoroughly secular being, steeped in Western democratic traditions, the creator of Bangladesh launched himself into political life as an activist of the communal All-India Muslim League.

Then came a reversal in the two men’s politics. While Jinnah drifted towards communalism through his demand for a state on the basis of the so-called ‘two-nation theory’, Mujib graduated, between 1947 and 1971, to become a leader who promoted the cause of secularism in his accelerating struggle for Bengali freedom. He had rejected communalism lock, stock and barrel.

Bangabandhu’s rise as a politician of consequence was therefore only natural, for it was through the evolution of his politics that he gave the state of Pakistan the kind of shake-up it so badly needed.

When, in February 1966, he announced a broad Six-Point formula for regional autonomy, encompassing the five provinces of Pakistan but especially for his native East Bengal, he was sending out a necessary message that the future he envisaged for his people would rest on the principle of non-communal politics. And within that principle were contained other foundational ideas, notably nationalism, socialism and, of course, democracy.

Today, an understanding of Sheikh Mujibur Rahman’s place in both regional and global politics is vital. This is because of the commitment he consistently brought into his politics, from his days as a young student and Muslim League activist in Calcutta to his leadership of the Bengali independence movement in 1971.

Along the way, he certainly paid a high price. He spent many spells in prison, with at least two of them threatening to end his life. The first followed his trial in the Agartala Conspiracy Case in 1968, when the obvious intention of the Ayub Khan regime was to condemn him to life imprisonment or death. The second came in 1971 after his trial, in camera, before a military tribunal in what was then West Pakistan, even as 75 million Bengalis waged a guerrilla war in his name in occupied Bangladesh. Yet Mujib didnot flinch in the face of these dangers. Nor was he given to compromise when it came to an assertion of his people’s right to dignity and freedom.

That Sheikh Mujibur Rahman was cut from different cloth was apparent during the Great Calcutta Killings of August 1946, a cataclysm brought on by the Muslim League’s call for Direct Action Day. In a pogrom which lasted four days and claimed the lives of between 5,000 and 10,000 Muslims and Hindus, Mujib engaged in desperate efforts to contain the violence. Stunned by the brutality that pitted Bengali against Bengali, with religion mutating into a weapon for murder and pillage, Mujib went around saving the lives of innumerable Hindus from rabid Muslim mobs in the city.

Pakistan would come into bloody existence a year later. But already Mujib was beginning to comprehend the fearsome state it promised to be. Small wonder, therefore, that post-1947 his rejection of communal politics paved the way for his rise as a leader dedicated to secular democracy, and indeed to his emergence as a pivotal force on a South Asian scale.

On 23 March 1972 – a few months after Bangladesh’s liberation – he made an emphatic address to Bengali intellectuals in Dhaka, highlighting his view that communalism was a debilitating disease that could only undermine life anywhere and everywhere.

Having been the foremost crusader for political reforms in Pakistan, and possessed of a clear understanding of the mindset of Pakistan’s ruling classes, Sheikh Mujibur Rahman was well equipped to brief the visiting Durga Prasad Dhar, Chairman of the Policy Planning Cell of India’s Ministry of External Affairs, on 19 April 1972 on the psychology of Pakistan’s President Zulfikar Ali Bhutto. It may be recalled that Indian Prime Minister Indira Gandhi was at the time readying herself for a summit with Bhutto. She and Dhar could not have found a better analyst of Pakistani politics than Mujib, whose relentless struggle against the civil-military bureaucratic complex in Rawalpindi was by then part of historical record.

On his release from nearly ten months’ detention in Pakistan, Mujib flew back home by way of London and Delhi in January 1972. He had inherited a country broken in nearly every aspect. Three million Bengalis had been murdered by the Pakistan army, and tens of thousands of Bengali women raped; towns and villages had been pillaged by the soldiers and their local collaborators; roads, bridges and culverts lay shattered; the economy was in ruins.

It was these challenges that Mujib and his government, to their credit, faced and managed. Within a year of liberation,Bangladesh had adopted a constitution and it held elections less than eighteen monthsafter its emergence. The country’s entry into global organisations and its establishment of diplomatic relations with nations around the globe were singular achievements of Sheikh Mujibur Rahman. These, and his personality and charisma, were certainly factors in a BBC poll voting him, in 2004, the greatest Bengali of all time.

Bangabandhu’s emphasis on humanity and secular principles, and his insistence that communalism was a disease that resulted in political instability, poverty and other social problems, are more pertinent today than ever, both forthe Indian subcontinent and globally. Tothe grateful people of Bangladesh, Bangabandhu Sheikh Mujibur Rahman remains a source of national pride and their window to the world.