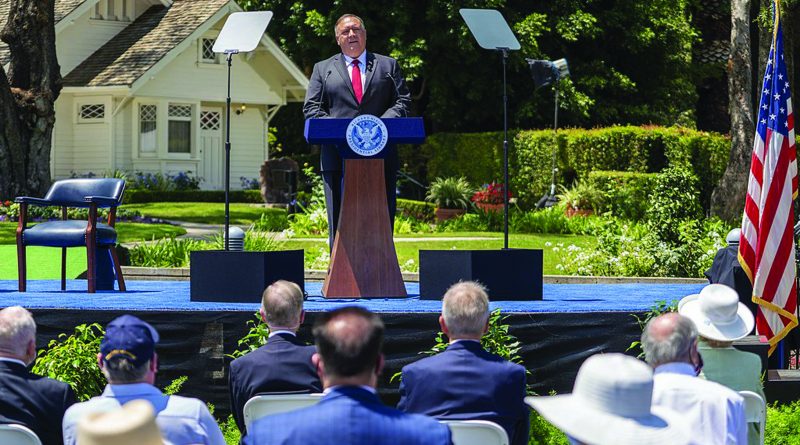 Over the past 60 years, many American leaders have wanted China to change, hoping that if it embraced capitalism it would moderate or abandon its Communist ideology. But the current US Secretary of State, Mike Pompeo, takes a far more hawkish view, which, says Duncan McCampbell , leaves the US-China relationship resembling a Cold War situation.

This summer, US Secretary of State Mike Pompeo used harsh words to describe the Chinese leader, Xi Jinping. He called Mr Xi a ‘true believer in a bankrupt totalitarian ideology’. The tone of his language, coupled with an ongoing and bitter trade dispute with the US, has led many policy experts to speak of a drift towards a new Cold War.

Mr Pompeo delivered his hawkish speech at the Richard M. Nixon Library in Yorba Linda, California. This has led me to consider the parallels in the present-day relationship between the United States and China, and the situation when Nixon was president, between 1969 and 1974.

Although Mr Nixon presented himself to voters as being tough on Communism, his decision to fly to Peking to meet Chairman Mao in 1972 was a pivotal event in China’s opening to the West after years of diplomatic isolation.

At the time, President Nixon said, ‘Taking the long view, we simply cannot afford to leave China forever outside of the family of nations’, before adding solemnly: ‘The world cannot be safe until China changes. Thus, our aim, to the extent we can, is to influence events. Our goal should be to induce change.’

Subsequent US administrations have often based their policy towards China on this hope that it would adapt to become more like the United States. However, according to Mr Pompeo, the effort was doomed to failure, as China remains as committed as ever to its Communist system and one-party rule.

‘The truth is that our policies, and those of other free nations, resurrected China’s failing economy, only to see Beijing bite the international hands that were feeding it,’ he said. ‘We opened our arms to Chinese citizens, only to see the Chinese Communist Party exploit our free and open society.’

Mr Pompeo has urged the international community to oppose China’s government. ‘We, the freedom-loving nations of the world, must induce China to change. Securing our freedoms from the Chinese Communist Party is the mission of our time.’

According to polls, almost 80 percent of Americans now hold a negative view of China

Perhaps surprisingly, Chinese reaction to Mr Pompeo’s speech was quite restrained. This may have been because China’s leaders, who closely control all external messaging, were busy preparing for their annual retreat in the resort town of Beidaihe on China’s northeast Bohai Sea coast.

The retreat was attended by delegates who are known to be concerned about China’s pandemic-weakened economy and its souring relations with a number of countries, including the United States. Moderate voices at the event encouraged a toning down of the brusque brand of ‘Wolf Warrior’ diplomacy which has been pursued by many of China’s foreign representatives recently. In August, Le Yucheng, China’s foreign vice-minister, took a conciliatory tone and called for efforts to prevent a worsening of US-China relations, saying he was ready to meet with Washington and talk ‘at any time’.

My view is that the Chinese Communist Party is primarily concerned about stability and for that reason domestic affairs take precedence. The pandemic has cratered the economies of China’s major trade partners, causing weak demand for Chinese exports, at a time when trade with America has been affected by a political dispute.

Although official economic data out of China is always questionable, there is substantial anecdotal evidence of widespread factory closures, as well as rising unemployment. Domestic consumer spending remains sluggish. China’s ability to stimulate GDP growth through borrowing and spending is not working as well as it once did.

China’s change in tone towards America coincides with a deterioration in its relations with many of the countries in the Indo-Pacific region. A loose anti-China alignment is forming among Japan, India and Australia.

During the summer, Japan cancelled a planned visit to Tokyo by President Xi. Tokyo also complains of relentless intrusions by Chinese vessels into its maritime territory. The government of prime minister Shinzo Abe is offering financial incentives to entice Japanese manufacturers away from China. Furthermore, Japan’s defence minister, Taro Kono, has said that he would welcome an invitation to join the ‘Five Eyes’ intelligence sharing agreement between the US, Australia, New Zealand, Canada and the UK.

For its part, Australia has challenged China over its military actions in the South China Sea. Beijing retaliated by slashing imports of Australian barley and beef.

Historically non-aligned India, still reeling from a bloody border clash with China, says it will invite Australia to join the Malabar naval exercises it conducts with Japan and the US in the Indian Ocean. All this leaves China with one firm friend in Asia: Pakistan. In addition, Singapore and South Korea are trying to avoid confrontation.

Professor Stephen Nagy from the International Christian University in Tokyo says any successful leader in China must prioritise meeting the daily needs of its citizens by creating jobs and fostering economic opportunity.

‘Global hegemony and peripheral security concerns are unlikely to top Xi’s priority list. He needs to manage a society that is rapidly transforming, and which is burdened with demographic issues which are worse than those in Japan,’ says Professor Nagy.

The hawks have it

In the United States, the hawkish voices of Mike Pompeo and much of the media affect the way people see China. According to polls,almost 80 percent of Americans now hold a negative view of the country.

President Trump continues to use China to deflect criticism of his administration’s chaotic response to the COVID-19 pandemic. The Chinese are hoping that the Democrat presidential candidate, Joe Biden, will be more informed, rational and predictable than Mr Trump.

However, I believe that Beijing should take note of one item included in the Democratic Convention, held online this August. An official statement of party policy showed support for Taiwan and, for the first time in decades, made no reference to the One-China Policy. If Mr Biden wins, China can expect more pressure from the United States on that contentious and important issue.

Professor Duncan McCampbell, an American lawyer, has twice lived and worked in China.  He currently teaches law and international business at Metropolitan State University in Minnesota, while writing on issues affecting the US-China relationship