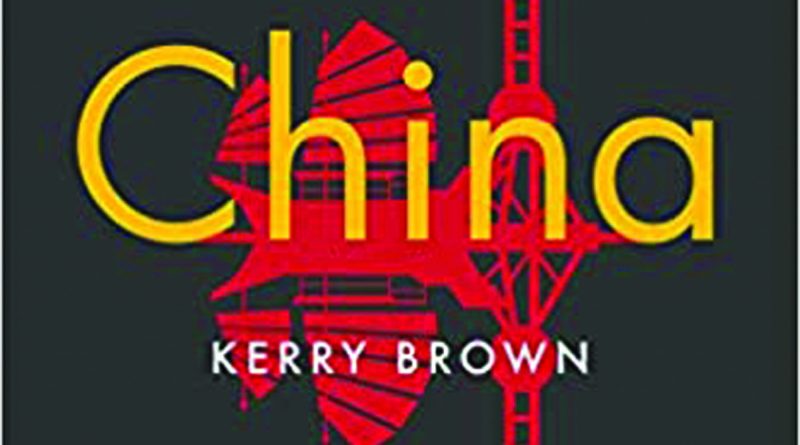 Polarising rhetoric between Beijing and Washington is expected to heighten in these months leading up to November’s US presidential election.  Already there is a plethora of books by experts delving into China’s military, its modern communism, its intent and much more.

It is refreshing, therefore, that Kerry Brown, Professor of Chinese studies at King’s College, London, calls his new book simply China, with no subtitle, and begins by asking a fundamental question missing from much of today’s debate: ‘What is China?’

The current cluster of political leaders within Western democracies have swung back and forth on the Chinese issue, one day embracing China’s money,the next condemning its human rights violations. Their intellectual bandwidth does not seem to give them an ability to explain to voters exactly what this rising global power is, why it behaves as it does and whether this is good or bad for all our lives.

The danger now is that the Chinese president Xi Jinping will end up shovelled into the same simplistic cartoon characterisation as afflicted Saddam Hussein, Muammar Gaddafi and others in the Middle East conflicts.

We all know the outcomes there.

In recent weeks, I have been told more than once in general conversations that Xi Jinping is a monster, with the implication that Western democracies must do something to stop him.

Brown steps in here with a no-nonsense, accessible account of China’s modern history, taking us from the Communist Party victory in 1949 to where we are now.

In his first chapter, entitled China’s Arduous March to Modernity, he reaches further back to tell the story of the nation’s decline from 1820, when it was ranked as the world’s largest single economy, to 1900, which saw it weakened, exposed and vulnerable, with swathes of its coastal areas under occupation by Britain and other foreign powers.

The clawing back began with Sun Yat Sen, the first interim president of the Chinese Republic who, in the 1920’s, argued for a sense of Chinese nationalism and unity of purpose.

‘We ought to be advancing in line with the nations of Europe and America,’ Sun wrote. ‘But the Chinese people have only family and clan groups. There is no national spirit. Consequently, in spite of four hundred million people gathered together in one China, we are in fact but a sheet of loose sand. We are the poorest and weakest state in the world.’

Since then there has been civil war, the upheavals of the Cultural Revolution, starvation caused by the Great Leap Forward and economic expansion with the rapid emergence of an educated middle class.

Yet Sun’s same thinking about Chinese identity and nationalism has been embedded in all subsequent governments, together with the pledge that China will never again be defeated by foreign powers.

Xi Jinping has taken it to another level.

Brown explains how Xi wrapped his own story within that of China, much in the way that Western politicians do when running for office. His is the story of an average Chinese citizen: ‘someone who had to undergo tribulation and suffering’ to succeed.

Unlike the American dream, however, which revolves around the individual, this is the dream of the Chinese Communist Party and therein lies the rub in the West’s growing confrontation with China.

Xi’s creation of himself as a cult-like leader and his uncompromising anti-corruption campaign garnered little attention outside of China, appearing to have strengthened his power and popularity only within the country.

But his intensifying repression, particularly prison camps in Xinjiang and the crushing of dissent in Hong Kong, has attracted attention that underlines the dangerous gap between these two opposing American and Chinese dreams.

Today, Xi’s main challenge is to keep on side his own expanding middle class, which is expected to swell to six hundred million by 2030. His government will have to maintain living standards and freedoms, albeit not democratic ones. If repression goes too far or the economy dips too much, Xi risks his supporters finding more affinity with Hong Kong-style protests.

As the China story gains more prominence in the Western media, Kerry Brown is frequently in the unenviable position of being invited as a commentator to explain the China story, only to find himself being challenged and labelled as pro-Beijing.

If only the world were as simple as a television soundbite.

There is much talk of a new Cold War, democracy yet again pitted against authoritarianism.  However, the type of ideology that drove the US-Soviet conflict, Brown tells us, does not attract Chinese people. Indeed, the concept of Marxist-Leninism barely registers. They are looking for something that works, and China’s blend of authoritarianism does not yet have a title.

‘Political ideologies and practices such as Communism come and will probably go,’ writes Brown. ‘But Chinese nationalism looks likely to be here to stay.’

As some of us become embroiled in discussions about Xi Jinping being a monster, we would be wise not to fall into the same trap as with Middle East leaders, and to heed Brown’s advice.

Yes, we can talk about what to do, but we should always ask: ‘Will it be effective?’

Humphrey Hawksley is an Asia specialist and former BBC Beijing correspondent. His latest book isAsian Waters: The Struggle Over the Indo-Pacific and the Challenge to American Power