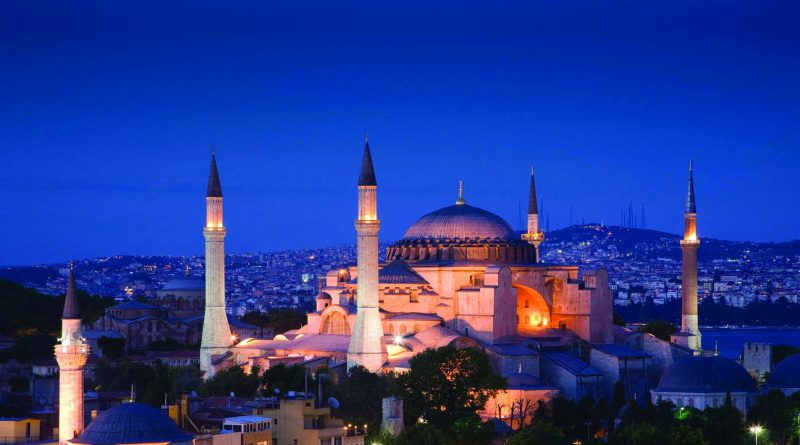 The re-conversion of Istanbul’s imposing Hagia Sophia into a mosque in July this year,following its 86-year incarnation as a museum, has raised uproar across the world. The case of Hagia Sophia,which attracted thousands of tourists daily, was brought before Turkey’s top administrative court, with Muslims claiming it had been a mosque before being declared a museum, and hence that status should be restored. But many across the world believe the building – originally created as a Christian church and now a UNESCO World Heritage site – should have remained a museum for everyone, an emblem of cultural and religious co-existence.

Since Turkish President Recep Erdogan lost the election for Mayor of Istanbul in 1994 on this very issue, his Justice and Development Party applauded the decision. However much it might have dismayed the secular sections of Turkish society, it was hailed by Islamists all over the country.

The first Friday sermonin Hagia Sophia in more than eight-and-a-half decades took place on 24 July, delivered by Ali Arbas, Director of Religious Affairs for the Government of Turkey. He appeared in ceremonial dress, holding an Ottoman sword as he read aloud from the Holy Quranverses about conquests. Arbas did not hide his resentment when he ‘damned the one who turned the Hagia into museum’ – clearly referring to Mustapha Kamal Pasha, during whose presidency of a secular Turkish republic the Hagia was converted from mosque to museum in 1934.

That transformation did not invoke support within the Muslim World, and this latest one – from museum back to mosque – has raised concerns in Europe and internationally, with Turkey’s neighbour Greece saying the move would burn bridges between Turkey and the West.

Conscious of religious sensitivities amongst Muslims, Erdogan has advised that curtains and other coverings should be used to conceal Christian mosaics and symbols during group prayers. Yet the amusing part of this direction is that, in addition to fixed times for the five daily prayers when congregations gather, as prescribed by Islam, a mosque is always open for individual prayers, so the Christian symbols would be seen then anyway, if left exposed.

The Hagia Sophia episode will no doubt open the door for debate that will have policy and other implications for today’s multi-cultural and pluri-religious states and societies. Old wounds and even tyrannies, buried in the sands of history, could be disinterred. The slow march of the civilised world towards peace, brotherhood and human development may stall as fundamentalist elements try to assert their authority in different parts of the world.

This must be prevented, and tolerance and respect for all religions and places of worship must continue to be nurtured. For this, credit is due to First World countries, including the UN. Interestingly,in different parts of the world many places of worship are becoming tourist attractions, which points to a widening of minds and imaginative horizons vis-à-vis different faiths and religious practices.

It is worth noting here the changing roles of Hagia Sophia over the centuries. Built in 537AD in the Byzantine architectural style, it was first used as an Eastern Orthodox Church. In view of its opulence and grandeur, it became very popular, attracting Christians from far and wide. Then, in 1204, it became a Roman Catholic Cathedral, before reverting to an Eastern Orthodox Church in 1261. It remained as such for almost two centuries until, in 1453, the Ottomans conquered Istanbul and converted Hagia Sophia into a mosque.

With the dismemberment of the Ottoman empire and the emergence of Turkey as a secular, democratic and independent republic, the first president, Mustapha Kamal Pasha Ataturk,turned the Hagia Sophia Mosque, as it was then known, into a museum in 1934. In 1985 UNESCO declared it a World Heritage site.

As Hagia Sophia once again becomes a place of worship for Muslims in an increasingly Islamicised Turkey, scholars and commentators continue to debate the role of religion in the state, and the levels of tolerance shown by different faith groups towards each other. Muslims enjoy great religious freedom in western countries, they argue, which they accept almost as a right. Should Islamic nations not extend the same freedoms to those of other faiths?

These and other related questions will continue to be debated, both in the west and in Islamic countries. Muslim scholars argue that Islam is, and has long been, more tolerant than it is often given credit for. For example, they maintain that, while Muslim armies in the past led armed expeditions, conquered and annexed territories and countries, there is hardly any evidence to suggest that the holy places of the defeated people were forcibly converted to the religion of the conquering armies.

The conquest of Jerusalem by the second Islamic Caliph, Omar Ibn e Khatab, is provided as an illustration of this point. In 634 AD, when he conquered Jerusalem and entered the precincts, he wanted to offer prayers. The Father of a nearby church offered to open the church so that Omar could pray there. But Omar refused, instead offering prayers on open ground close to the church, and telling the Father: ‘If I had offered prayers in the church it would become a precedent. After I had left, other Muslims would come and start praying in the church.’This seems to illustrate not only the Caliph’s powerful attachment to his own faith, but also a desire not to encroach on other faiths’ places of worship.

Another example can be seen in India’s history, when Muslim marauders from the north-east would come and attack parts of India known for their rich temples. While they would attack in the name of Islam, and plunder the wealth of these temples, they would ultimately return to their lands with the spoils, leaving the temples poorer but otherwise unchanged. The modern civilized world has shunned the practice of conversion of religious places. These practices should be discouraged in all respects.