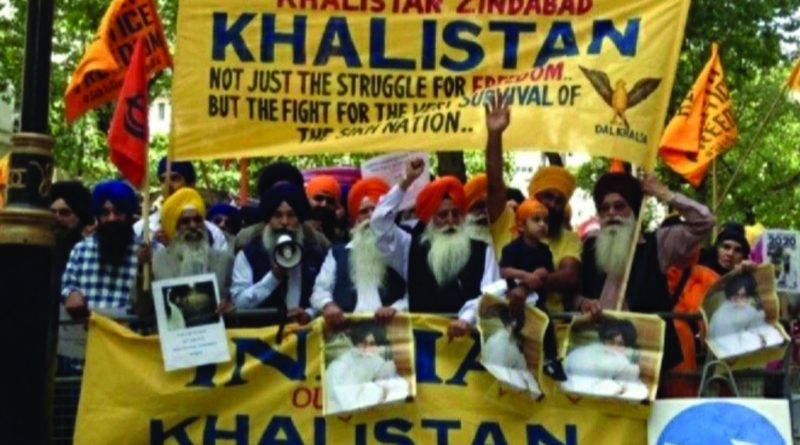 On August 5, the politics of Jammu and Kashmir played out on British soil when around 150 pro-Pakistani Kashmiri and Khalistan supporter groups gathered outside the Indian High Commission in London to protest against the abrogation of Article 370 by India exactly a year earlier, and to mark it as ‘Kashmir Day’.

Demanding that the revocation of Article 370 be reversed, protestor Tariq Mehmood of the Pakistan Patriotic Front said, ‘We will continue to protest against Modi’s oppressive government outside the Indian High commission, until the Kashmiri people are given their full rights. This is only the beginning.’

In response to the demonstrations, an Indian High Commission spokesperson said the number and scale of the protests were ‘less than anticipated’, and that the HC’s focus was on ‘safeguarding India House property and personnel and countering to the extent possible the misinformation campaign by vested interests’. The spokesperson expressed the High Commission’s appreciation of the ‘unprecedented measures taken by the Met Police’ to prevent a repeat of last year’s protests, when the Commission was attacked by violent crowds indulging in hate speech and inciteful slogans, which were said to be led by a Minister of the Government of Pakistan. For its part, HCI had ‘taken care to disseminate factual information about progress, development and optimism in Jammu and Kashmir’.

On the night of 4/5 August, a banner announcing ‘Kashmiri Lives Matter’, with the hashtag #KashmirSeigeDay, was projected on to the back of the House of Commons by the Thames, and on Marble Arch in Central London. No organisation has yet claimed responsibility.

A virtual seminar on the theme ‘Reflections and Relevance of Heritage in the Modern Era’ took place on 8 August as part of the Bengal Heritage Foundation’s new Think Tank series, along with the Indian Journalists’ Association in the UK, Kolkata Literary Meet and the British Council.

Moderator Malavika Banerjee, the Director of Kolkata Literary Meet, said that recent events in the US raised ‘pertinent questions around how we should see our history in the context of changing times’. Whilst the discussion mainly focused on the shared history between the UK and India, Banerjee added that ‘references also applied elsewhere in the world, as we move further into becoming a global village’.

Webinar participants included Zehra Zaidi, a campaigner for ‘We Too Built Britain,’ which received the support of British Chancellor Rishi Sunak to include ethnic minority figures in British coinage. For Britain to be perceived as ‘modern, open and global,’ the absence of ethnic minority symbols from the building Britain narrative needs to be addressed, said Zaidi.

On the Black Life Matters movement, Zaidi pointed out how it has ‘highlighted that leaders and heroes can be flawed’ and so there is ‘an urgent need to focus on our inclusive history and unite around common themes’.

Panellists agreed on the need for an evolution in perspective to include controversial parts of history, such as the British Empire, with Jonathan Kennedy, Director Arts India at the British Council, saying, ‘We have to shift the lens in interpreting culture’.

Talking about teaching a ‘well rounded’ history, author, columnist and founder of Amritsar’s Partition Museum, Lady Kishwar Desai, said it was ‘a fallacy’ to suggest the younger generations are not interested in history, as 1,500 people attended the launch of the museum in a hall meant only for 300. The use of various different media, including theatre and storytelling, was seen as a way forward in making history inclusive and fair.

Shrabani Basu, author of books including Spy Princess: The Life of Noor Inayat Khan, and founder of the Noor Inayat Khan Memorial Trust, recalled how it was her readers who started her off on the memorial, as it was ‘their idea that a memorial should be there’.

Taking to the streets

Pakistan’s  Independence Day, August 14, saw nationalist Kashmiri groups demonstrating in front of the country’s Consulate in Bradford against its occupation of POK, human rights violations in the region, and a political map – issued by Pakistan on August 4, the eve of the first anniversary of India’s abrogation of article 370 – which claimed all of J&K, plus parts of Gujrat, as its own territories.

Nationalist Kashmiri groups in the UK since have been very perturbed which culminating in a protest outside the Pakistan Consulate in Bradford, UK.

Mahmood Kashmiri, chairman of Jammu Kashmir National Independence Alliance UK, said in a speech outside the Consulate: ‘Kashmiris look at Pakistan as an occupier…we oppose this move… and we demand Pakistan immediately moves out of our region and gives the people of Jammu and Kashmir their right to independence.’ He added that ‘if Pakistan does not end its occupation, we will keep exposing its atrocities and exploitation of our region to the world’.

More such protests are being planned across the UK.