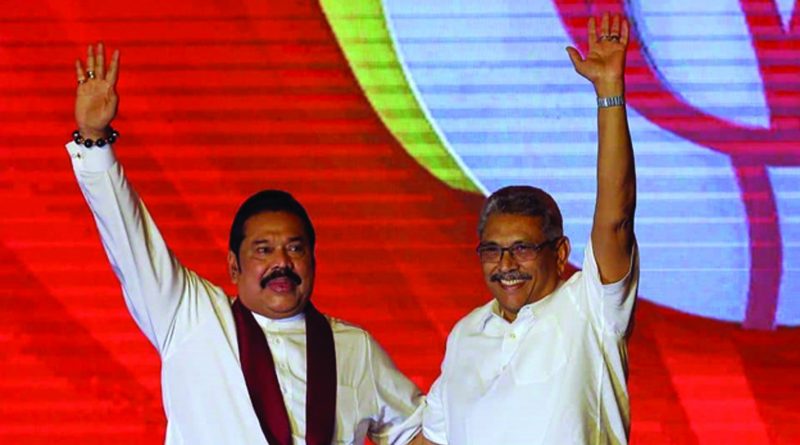 With the old ruling clan back at the political helm, Sri Lankans can expect more to come from the country’s ‘first family’.  Neville de Silva reports.

Nine months later the longstanding and politically astute Rajapaksa family from the largely Sinhala-Buddhist south swept aside, like an uncontrollable tsunami, every other political party in July’s parliamentary elections, winning an unprecedented 145 seats in the 225-member legislature under the proportional voting system.

Also demolished was the United National Party (UNP), one of Sri Lanka’s oldest parties which had been in at least half of the post-independence governments since 1948. Having held 106 seats in the previous parliament, it was reduced to a single one– and even that not directly elected but under a bonus system. Its leader Ranil Wickremesinghe, several times prime minister, lost his place in parliament for the first time since 1077.

Campaigning for the presidency and thereafter for the relatively new SLPP, led by elder brother and former president Mahinda Rajapaksa at the parliamentary elections, Gotabaya Rajapaksa urged the people to give them a two-thirds majority.

That the people did. The SLPP won almost 60% of the total vote, resulting in two of the brothers being installed at the apex of power. But that was not all. When the cabinet was announced later last month, other Rajapaksas were there to receive their share.

Having held 106 seats in the previous parliament, the UNP was reduced to a single one

This ‘family affair’, as the discredited and depleted opposition call it, is not the end. When the constitution is redrawn and the 19th Amendment (introduced by the previous widely castigated government), which reduced presidential powers and brought in several democratic reforms, is jettisoned, another brother, Basil, who was ineligible to contest elections as a dual citizen, will return to the cabinet with a key post in economic affairs.

One reason for the Rajapaksa rampage is clear enough: the 2019 Easter Sunday bombings by extremists believed to be linked to the Islamic State.

Gotabaya Rajapaksa, a security-conscious man, accused the then coalition government of President Maithripala Sirisena and Prime Minister Ranil Wickremesinghe of dismantling the security apparatus he had so carefully structured, and ignoring several intelligence alerts from India about the impending attacks. This played on widespread national fears of a terrorist revival that the Rajapaksa brothers had crushed ten years earlier when they militarily defeated the LTTE, a ruthless minority Tamil secessionist group with extensive international links.

President Gotabaya called for heightened national security and strong and stable governance, a call enhanced by the outbreak of the coronavirus in March this year, just weeks after he had dissolved parliament in preparation for the April parliamentary elections. Polls were postponed twice because of the pandemic.

With no parliament, the president moved quickly, deploying retired military officers and medical teams to isolate virus suspects, locking down affected areas and stopping incoming flights and passengers. This won him commendation from the World Health Organisation for prompt action in containing the spread of COVID-19.

While some saw the use of the military, retired and serving, as a well-planned operation that indicated what the country could expect from future governance, critics dismissed it as a Roman-style praetorian guard protecting the first family from foreign or local conspiracies to topple them from power, now or in the future.

Inaugurating the 8th Parliament on January 3, President Gotabaya reiterated his aversion for the present constitution that was amended by the Sirisena-Wickremesinghe duo. In his policy statement that day, he claimed the existing constitution had given rise to many current problems, due to its ambiguities and confusions. It was therefore necessary, he said, to ‘promulgate a new constitution to establish strong executive, legislature and an independent judiciary that can ensure the sovereignty of the people’.

While it is already established that the new government has a strong executive and a legislature that will cater to the demands of presidential power, especially if the impending constitution is made to bend to the will of the executive by restoring the powers of the presidency, the question that worries jurists and the public is how and where the judiciary will stand if ever the country runs into legal confrontations.

The first task of the new parliament must be to kick the despised amendment into the long grass. The next would be for experts and legislators to frame the new constitution in which priority will be given to the concept of ‘one country, one law for all the people’, as President Rajapaksa told parliament.

That would mean doing away with customary laws such as the northern Tamil ‘Thesavalamai’, codified in 1707 during Dutch colonial times; Kandyan laws of the Central Province, codified in 1938, dealing with marriage and inheritance; and current Muslim laws concerning the minimum marriage age of Muslim girls.

While the attention of the new legislature was focused on the immediate tasks facing the Gotabaya government, he had not forgotten those, particularly from southern rural areas, who gave him a mandate with a two-thirds majority.

He set out a whole range of areas that he believed have been neglected by successive governments. His campaign tours across the country, speaking to the voters instead of lecturing and even hectoring them from platforms, exposed where governments and elected MPs, as well as state institutions, had failed to serve the people.

That is why he concentrated so much on the rural economy:rural schools, medical institutions, agriculture, joblessness and rural communities at large, whose economic deprivation was compounded by the impact of the coronavirus pandemic.

But two other vital issues went without mention: how the government is to meet rising expenditure and unpaid debt, as it continues to struggle with the mounting fiscal crisis.

The Sri Lanka Central Bank notes that mounting external debt is equivalent to 42.6% of GDP in 2019. Meanwhile, by the end of this year, almost $3 billion is due for repayment, much of it to China.

For all the political hoopla that emanates from the newly elected government, Gotabaya Rajapaksa remains understandably silent on this. He knows that economic troubles lie ahead. If the government continues to fall back on China and key Sri Lanka resources are hocked to Beijing, the governing People’s Front will be hard pressed to perform its foreign policy balancing act.

While the Asia-Pacific is turning more troublesome with the distant sound of war drums, closer to home in the Indian Ocean Sri Lanka’s juggling with China and India will need deft diplomacy.

The question is whether bureaucratic amateurs handing policy will find themselves all at sea as regional and world nuclear powers navigate more into the Indian Ocean.