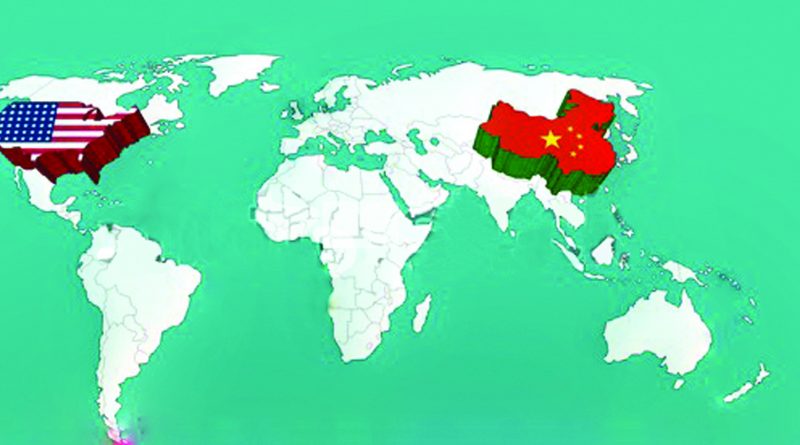 At the core of a new geography

Rodger Baker offers a glimpse into the emerging geographical perspective of the 21st century, and its two pivotal players, the US and China

The geographical perspective of the 21st century is just now being formed. And at its heart is a rivalry between China and the United States to succeed Europe’s 500-year centrality in the international system, which will be framed by a shift in global economic activity and trade, new energy resource competition, a weakening Europe and Russia, and a technological battle to control information. The new map of the next century will extend to the ocean floor for resources and subsea cables, to space where low-Earth orbit satellites drive communications, and into the ill-defined domain of cyberspace.

As the 21st century dawned, Europe’s centrality to the world system was already beginning to fade, despite the economic heft of the European Union. The collapse of the Soviet Union left a weakened Russia and several newly independent or restored states, significantly reducing the chances for major conflict in Europe and curtailing fear of a Eurasian heartland power. China stood on the verge of a massive economic boom, having recovered from the global strictures following the Tiananmen Square incident. Trans-Pacific trade had already overtaken trans-Atlantic trade several decades earlier, and the US ‘victory’ in the Cold War left the United States an apparently unchallengeable global hegemon.

The September 11 attacks in 2001, the global financial crisis in 2007-2008 and the current COVID-19 pandemic have all blunted that sense of American invincibility. But it can still be argued that the United States has emerged as the pivot of the world system for this new century – the crossroad between Europe and Asia, between the Atlantic and Pacific. The United States, while managing social and political instability at home, remains the largest single economic or military power on the planet. And despite laments to the contrary, there is still a robust innovative culture and even a manufacturing base.

Across the Pacific, China is proffering itself as the heart of 21st century geography. Its Belt and Road Initiative connects a massive pool of resources, human capital and consumer markets in Europe, Africa and Asia by land and sea. Its trade and transit arms reach across the Arctic, Pacific and Indian oceans, and spiderweb across Asia and Europe. China’s centralised government and economic model, emerging military might and massive population position it as the peer competitor to the United States. Increased economic and military power brings with it political sway, and China is actively seeking to reshape global norms and regulations to better fit its geopolitical perspective and interests.

Competition, but not a Cold War

China and America are in a contest for the central role in an international system, in a world where, despite resurgent economic nationalism, true decoupling will be difficult, if not impossible. The Cold War splitting of the world into blocs was facilitated by a unique moment in history – the emergence of an existential rivalry at a time when the international system itself lay in rubble following decades of war across Europe and Asia. In excluding the Soviet Union and its allies from the new economic system, the United States was not necessarily decoupling with Russia, but was merely omitting it from a new financial architecture.

There is no such crisis to facilitate an easy breaking of economic bonds with China. While the United States has grown accustomed to using sanctions as an economic tool of political coercion, it has mostly been against much smaller and often marginalised nations – and success of this sanctions-heavy strategy has been mixed at best. China and the US have complex and tightly integrated economies, from $650 billion in annual trade to reciprocal portfolio holdings and investments, sourcing of materials, and parts and labour in supply chains. It is not simply a few threads to cut, it is a complex tapestry that resists rending.

Unlike the calamity of World War II, the international system is only fraying at the edges now, not completely unravelling, despite the economic and pandemic crises of the last two decades. The United States and its partners may cut some strands with China, focused mainly on high-end technology over national security concerns, but it would take decades of concerted effort and economic pain to tease apart the bulk of trade ties. Supply chains will be reformulated, technological competition will begin to fragment cyberspace, and competition for critical raw materials will increase, but there is little room for the complete decoupling of major economies, despite current US-Chinese frictions or fears of a no-deal British exit from the European Union.

In noting that each century has its own geographic perspective, British geographer Sir Halford J. Mackinder made an important observation in his book, Democratic Ideals and Reality: A Study in the Politics of Reconstruction, published in 1919: While geography may not change much over time, the way people perceive and interact with it does. Technology, economic structures, and evolving social and ideological concepts all play a major role in our interaction with the physical world. The shift from wind to coal to oil had a major impact on not only the perception of distance, but the relative importance of certain geographical locations and routes. As we work to define the 21stcentury geography, it is useful to look at the past, recognising that it is the human interaction that provides perspective and defines the significance of geography at any given time.
Writing at the close of World War I, Mackinder defined the geography of the newly dawned 20th century as one centred on the ‘Heartland’ of Eurasia, and on a contest of power between that continental heartland and the insular maritime powers around its periphery. Mackinder argued that technological innovation, particularly rail, would allow a heartland power to tie together the resources and population of what he termed the World Island (Europe, Asia and Africa). With its internal lines of communication protected from seapower, the heartland would then rally its resources to out produce and outcompete the maritime powers. The ambitions of Germany and the Axis powers in World War II, and the Soviet Union in the Cold War, both seemed to confirm Mackinder’s assessment and thus defined the geopolitical contours of the 20th century.

The defining geographic characteristic of the 19th century was the impact of the industrial revolution on socio-economic patterns and international trade, with a surge in urbanisation, the specialisation of production and expanding supply lines for raw materials and markets. But the groundwork for the global cataclysms of the 21st century was also being set in motion. Continental-maritime rivalries between the United Kingdom and Russia played out in the Great Game, and global exploration filled in much of the remaining empty space on maps, leaving little buffer space between nations. As the century drew to a close, early signs of a future challenge to Europe’s centrality were appearing. The United States shifted radically from a continentalist to an internationalist position, highlighted in the 1898 Spanish-American War, and Japan overturned the old continental order, supplanting a waning China as the central power in Asia.

We could walk back further, seeing the massive surge in trans-Atlantic trade in the 18th century as defining a new centre to an emerging world system, with vast Atlantic replacing the closed Mediterranean as the central connector. What preceded was the 17th century, defined by the Peace of Westphalia treaties and the emergence of the modern state, with sovereignty over people, economics and territory. And before that was the 16th century, which saw the emergence of the interconnected world writ large – made manifest not so much in European conquest, as perhaps in the massive Japanese invasion force trying to push through Korea at the end of the century, armed with European arquebuses in an attempt to overturn a Chinese world order.

The United States and China will sit at the forefront of the 21stcentury geography, with the US remaining a traditional maritime power, as China works to bridge a continental and maritime role. Europe and Russia will both retain power and influence, though to a lesser degree, and while they may lean toward the larger poles, they will not fall into locked alliances. Russia may align with China, but Chinese initiatives in the Arctic, Central Asia and into the Indian Ocean and Middle East are all encroaching on areas of traditional Russian interests. While Europe and the US may align on many issues, Europe is also increasingly integrated into transcontinental land-based trade routes and at odds with the United States on regulatory fronts, from taxation to cyberspace to environmental regulations.

The formative technologies of the 21st century will also include another shift in energy, leaving some areas less important, and others emerging as the centre of resource competition, including on the seafloor and potentially in space. Localised power production, whether through wind and solar or through nuclear microreactors, will open opportunities in disconnected areas, from the Arctic to the highlands of Indochina. Agricultural sciences will further change the relationship between populations and land, adapting to changing climatic patterns and urbanization trends. Biomedical technologies will mitigate some of the demographic challenges of aging populations, overturning traditional economic models that preference the continued enlargement of labour pools. Space will become the new battleground for competing routes of information flow, and competition will extend into the physical infrastructure and the ethereal concepts of cyberspace. Hypersonics will further decimate the impact of distance, and the expansion of autonomous weapon systems will again alter the geography of war.

This emerging geographical perspective of the 21st century is still slightly out of focus. But what is certain is that it will revolve around China and the United States, locked in competition for that pivotal position in the world system.

Rodger Baker is Senior VP of Strategic Analysis at Stratfor