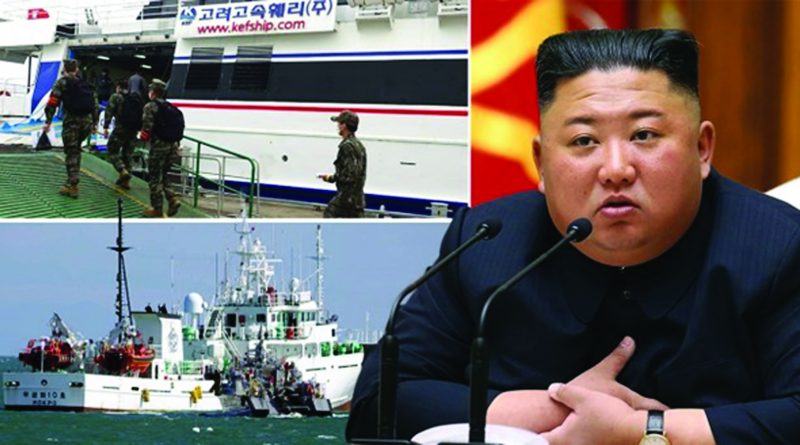 September’s UN General Assembly in New York was a chance for Asia’s leaders to tell the world of their challenges and ambitions. For South Korean leader Moon Jae-in, the dream is peace with the North. But as Duncan Bartlett  reports, a violent setback has brought a halt to inter-Korean dialogue

The murder of a South Korean official by soldiers from North Korea was announced just as the President of South Korea was using a major speech to the United Nations to call for a lasting peace on the peninsula.

The killing – the first of a South Korean citizen by North Korean forces for a decade – caused outrage in the South.

The victim was an official from the Ministry of Oceans and Fisheries. The exact circumstances of the killing are unclear, though it appears he was challenged by the North Korean soldiers on a boat. They then shot him, before pouring oil over his body and setting him alight.

A statement from the South Korean government said: ‘North Korea found the man in its waters and committed an act of brutality by shooting at him and burning his body, according to our military’s thorough analysis of diverse intelligence. Our military strongly condemns such a brutal act and strongly urges the North to provide an explanation and punish those responsible.’

By the time the killing was making headline news, President Moon had already written and recorded the speech that would be played by video link to the United Nations General Assembly in New York.

‘What all of us need to do is to take one more step forward,’ he said in his speech. ‘My belief remains unchanged that we can achieve denuclearisation and bring lasting peace on the Korean Peninsula with the international community’s continued support and cooperation.’

Moon said great economic benefits would accrue to North Korea if it would cooperate with the South. He also proposed to lead a new Northeast Asia Cooperation Initiative for Infectious Disease Control and Public Health, involving North Korea, along with China, Japan and Mongolia.

President Moon also reminded his audience of his hope for the reunification of the two countries through a lasting peace treaty.

‘At the end of the day, the South and the North are bound by a single community of life,’ he said.

After Mr Moon’s speech was delivered, the North Korean leader Kim Jong-un apologised over the killing of the fisheries official, calling the incident ‘unexpected’ and ‘unfortunate’.

The apology came in the form of a letter sent to President Moon, according to South Korea’s presidential office, known as the Blue House.

Yet the North is still refusing to have almost any official contact with the South. Earlier this year, soldiers used explosives to destroy the joint liaison office, which was used for international talks. The military hotline between North and South was cut in June.

There is also mounting speculation that North Korea is preparing a new weapons demonstration, such as by firing a long range missile from a submarine.

All this angers Mr Moon’s political opponents in South Korea, who believe their president’s attempts at dialogue are weakening their country’s position and making it more vulnerable. And they regard the killing of the fisheries official as a reminder of North Korea’s often merciless regime.

Japan’s new prime minister, Yoshihide Suga, has indicated that he will take a similar hardline position on North Korea to that of his predecessor, Shinzo Abe.

Mr Abe disapproved of the dialogue between Mr Moon and Kim Jong-un. He was also sceptical about the summits which Donald Trump held with the North Korean leader.

The Japanese government is adamant that North Korea must return several Japanese citizens who were abducted in the 1970s and 1980s and Mr Suga raised this point in his speech to the United Nations General Assembly.

The issue of repatriation was also included in a short telephone conversation between Prime Minister Suga and President Moon, who offered to support Japan’s efforts to get the abductees home.

However, there are also profound difficulties in the Japan-South Korea relationship.

‘I told President Moon that current bilateral relations, which are very severe at this moment, due to issues such as wartime labour, should not be left hung out to dry. I continue to press South Korea strongly to take appropriate action based on our coherent position on various issues,’ Mr Suga told reporters.

There has been some progress. The leaders have agreed to work together to resume business travel between the two countries and to cooperate in the battle against coronavirus.

Yet there was no shift on the really divisive issue, relating to when the Korean peninsula was occupied by Japanese forces, more than 75 years ago.

President Moon supports a demand by the Supreme Court in Seoul that Japan should pay additional financial compensation relating to that period. However, Japan insists that the issue was resolved by a 1965 agreement that normalised diplomatic ties with South Korea.

For the rest of the world, this festering dispute is something of a puzzle. The issue creates frustration for the United States, which counts both Japan and South Korea as allies and counterweights to China’s growing influence. In 2019, the US Defence Secretary Mark Esper, urged South Korean and Japan to continue sharing military intelligence.

Prime Minister Suga is clear that the alliance with the United States is the foundation of its foreign policy. That pact remains strong, despite Mr Trump’s pressure on Japan to pay more for hosting American forces, as part of a ‘burden sharing’ deal.

The Trump administration is also pressing Japan to strengthen its security partnerships with India and Australia, which, along with the United States, form an informal defence alliance known as the Quad.

When India’s Prime Minister, Narendra Modi, congratulated Mr Suga on becoming Japan’s leader in a Tweet, he added: ‘I look forward to jointly taking our Special Strategic and Global Partnership to new heights.’

By contrast, the messages congratulating Mr Suga from South Korea and China felt stiff and rather ceremonial. Japan likes to see itself as one of the great nations of East Asia. But presently, it seems to have more in common with countries in south Asia, and those which lie far to the West, than with its immediate neighbours.