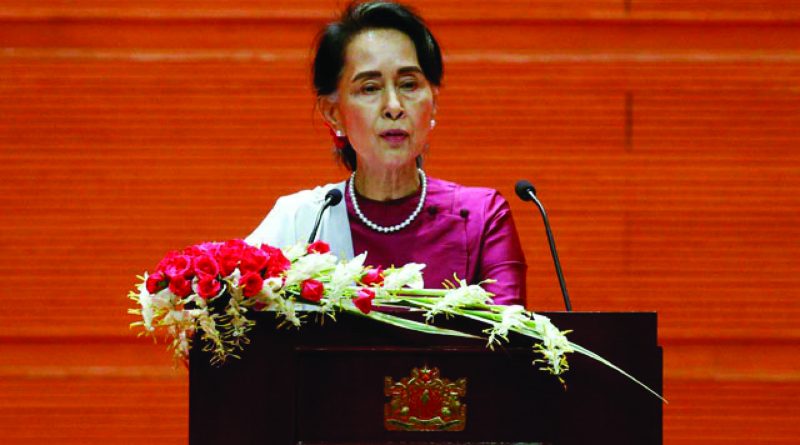 Faith in the polls, fear of the jurists

As Myanmar prepares to hold parliamentary elections, the country’s de facto ruler, State Counsellor Aung San Suu Kyi, is confident of re-election – provided a surge in COVID-19 cases does not lead to the poll being delayed. Less sure, however, is that the verdict from the International Court of Justice in the Hague will go her way.  Nicholas Nugent  reports

In 2015 Aung San Suu Kyi’s National League for Democracy (NLD) won 80 per cent of elected seats in Myanmar’s parliament, bringing the Nobel Peace Prize winner to power. The election result was seen as a triumph for democracy over military dictatorship, since the army had not allowed Ms Suu Kyi to take power after an earlier electoral victory in 1990.

But there are limits to Ms Suu Kyi’s authority. Under a constitution drawn up during military rule, Myanmar’s army – known as the Tatmadaw – holds 25 per cent of parliamentary seats and appoint the heads of three crucial ministries: defence, home and border affairs. The military denied Ms Suu Kyi the post of president because her children hold British nationality. The military bloc in parliament means her civilian government is not in a position to amend the constitution.

Now Myanmar is heading to the polls again on November 8 and Ms Suu Kyi’s NLD are expected to hold on to power. No other party secured more than 10 per cent of the vote last time and to most Myanmar citizens, NLD rule is preferable to a return to military control. It seems they may overlook the fact that Aung San Suu Kyi’s government has achieved little of what it promised five years ago.

The economy is faltering, not helped by a late rise in COVID numbers. The administration has done nothing of significance to end the country’s reputation as a narco-state, with heroin and methamphetamine use especially high in Shan and Kachin states.

Nor has it done much to end insurgencies in the remoter, ethnically-based states, much of them linked to illegal cross-border activities including smuggling, drug-running and gambling.

In August Ms Suu Kyi convened what is known as a ‘Panglong Conference’ in the capital, Naypyidaw.  This commemorates a historical gathering in the Shan State called by her father, General Aung San – the country’s independence leader – at which some of Burma’s many minority ethnic communities agreed to work with the new government. The outcome is known as the Panglong Agreement.

This accord represents an aspiration for the Buddhist majority Bamar (or Burman) people, who constitute 70 per cent of the population, to live in one nation alongside hill-based minorities of the ethnic states – the Shan, Kachin, Chin, Rakhine, Mon, Kayin and Kayah. Some of these groups are Christian. Ms Suu Kyi, whose mother was Christian, had a better chance of achieving unity than the Bamar-dominated army.

A recent report by the International Crisis Group said ‘the state’s failure to protect minority communities has driven tens of thousands of people to take up arms’, adding that some areas are a patchwork of ethnicity-based armed groups, each fighting both for their communal rights and to protect their own economic rents’. This year’s Panglong Conference was Ms Suu Kyi’s latest attempt to bring warrior minorities in from the cold.

Internationally, the best known of Myanmar’s minorities are the Muslim Rohingya of Rakhine state. Three quarters of a million Rohingya fled to Bangladesh in 2017 after an alleged pogrom against them, and the exodus continues, with at least 800 Rohingya refugees arriving by boat in Malaysia and Indonesia this year.

Ms Suu Kyi surprised observers by travelling to the Netherlands a year ago to deny before the International Court of Justice (ICJ) that the exodus was a result of determined efforts by the Tatmadaw to kill or persecute Rohingya. The action was brought by a group of nearly 60 Islamic countries. Canada and the Netherlands recently expressed their support for the action, on which the ICJ has yet to deliver a verdict.

In a preliminary ruling the court ordered Myanmar to do all it can to prevent genocide in Rakhine state. The Rohingya cause is not popular among Myanmar’s Buddhist majority causing the Economist to write: ‘It is hard to escape the conclusion that [Ms Suu Kyi] is exploiting the Rohingyas’ misery to boost her party’s prospects in elections due in 2020.’

It will not have helped Myanmar’s case that two defecting Tatmadaw soldiers recently gave evidence to the court that they were following orders ‘to exterminate’ the Rohingya. One of them, Myo Win Tun, says on a video seen by the New York Times, ‘We indiscriminately shot at everybody. We shot the Muslim men in the foreheads and kicked the bodies into a hole.’ Myo claims to have participated in the burial of 30 men, women and children in a mass grave.

The Rohingya are the minority in Rakhine state which, before British rule, was the princely state of Arakan. In April came reports that militant members of the Rakhine majority, operating as the Arakan Army, were engaged in an all-out battle with the Tatmadaw, resulting in heavy casualties on both sides. The fighting only died down after an outbreak of COVID-19 in the region. In an adjoining state members of another minority community, the Chin, also engaged in a fierce battle with the Tatmadaw. Both groups are thought to be seeking greater autonomy.

The UN Special Rapporteur on Human Rights in Myanmar, Yanghee Lee, said in April that the military’s conduct in Rakhine and Chin states may amount to war crimes and crimes against humanity. Ms Lee was in 2017 banned by the government from visiting Myanmar after saying its behaviour towards the Rohingya was worse than that of the previous military regime. International Crisis Group’s Richard Horsey says ‘continued armed conflict and the lack of concessions on minority rights have contributed to the view that the ruling party is tone deaf to ethnic grievances’.

Nor are the motives of the Tatmadaw entirely clear. While they are fighting alleged separatism in some areas, in others they are said to be benefiting from illegal smuggling and drug trading. In his book Hello, Shadowlands, author Patrick Winn quotes a former army officer in Kachin state as saying of the ethnic armies there: ‘These drug producing militias are the children of the military.’

The upsurge in COVID cases has especially impacted Rakhine state. But even before this rise, doubts were being expressed as to whether there could be a free vote, with so much territory in turmoil. If the election goes ahead, and Ms Suu Kyi’s NLD triumph, it will be in spite of its lack of progress in uniting Myanmar’s people. In due course, the ICJ in the Hague may deliver a rather different verdict.