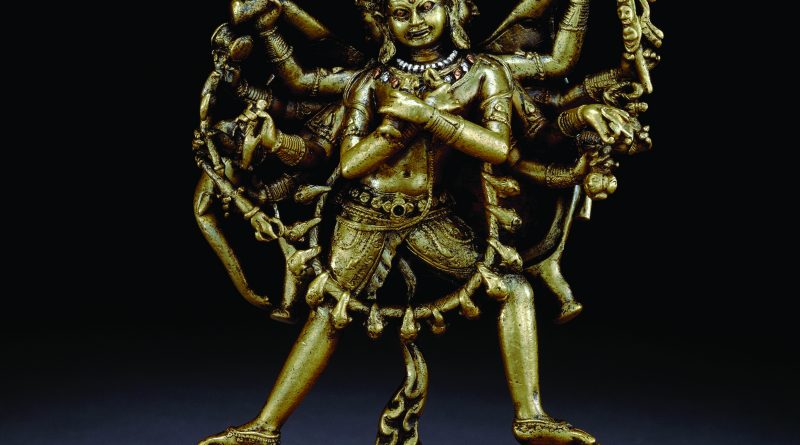 A new exhibition, ‘Tantra: Enlightenment to Revolution’, open edits doors to the public at the British Museum’s exhibition centre on September 24. The exposition, which charts the history of Tantra, is showcasing over 100 objects including sculptures, paintings, prints and ritual objects, some dating back to the 9th century. Most of the works come from the British Museum’s own collection, which is one of most comprehensive of Tantric material in the world. However, this is the first time it has been exhibited on such an expansive scale.

Rooted in India, Tantra is a radical philosophy that takes its name from the Sanskrit word ‘tan’, meaning ‘to weave’ or ‘compose’. It transformed the religious, cultural and political landscape of India and beyond but in the West it is often associated with sex and yoga, and thus misunderstood.

This exhibition endeavours to bring about a change in such ideas by demonstrating the dynamic evolution of Tantra from its earliest incarnation, and weaving it into the modern era, showing how it has challenged political, sexual and gender norms around the world since its inception, leading to revolutionary thinking.

Dr Imma Ramos, curator of ‘Tantra: Enlightenment to Revolution’, said: ‘This major exhibition will capture the rebellious spirit of Tantra, with its potential to disrupt prevailing social, cultural and political establishments. Tantra is usually equated with sex in the West, but it should be understood as part of a broader philosophy of transgression. We will demonstrate Tantra’s enduring potential for opening up new ways of seeing and changing the world.’

Starting from the very early Sanskrit scriptures on loan from Cambridge University Library, the exhibition takes us through the emergence of Tantra in India in 500 AD to its early medieval transformation of Hinduism and Buddhism, to the Moghul era, exploring its links to India’s fight for independence and the rise of 1960s’ counterculture in the West and finally to its impact on feminist revolutions in present times.

The stand-out theme in the exhibition is the role that Tantra has played in female emancipation and empowerment. The Tantric worldview sees all material reality as animated by Shakti – unlimited, divine feminine power. The rise of goddess worship in India can be attributed to this.  From the 9thcentury sandstone temple relief from Madhya Pradesh, depicting the ferocious goddess Chamunda dancing on a corpse, to the 19th century sculpture of Kali, incarnation of Parvati, wife of Shiva, standing over his chest, reveals the place female power holds in tantra.

At the core of Tantra is the belief that ‘liberation from the world is possible in the world’ by embracing the mundane and the regular and then transcending them. Thus, the emphasis on actively engaging in sexual activity with a partner in order to ultimately transcend desire itself: ‘By passion the world is bound; by passion too it is released’.

Tantra chose to depict these ideas through violent imagery which were often misinterpreted.

Talking about how Tantra has captured the imagination of people over centuries, Dr Hartwig Fischer, Director of the British Museum, said: ‘We’re delighted to present “Tantra: Enlightenment to Revolution” – the first historical exploration of Tantric visual culture from its origins in India to its reimagining in the West – where visitors will be able to explore the wider philosophies of Tantra.’

The exhibition is supported by the Bagri Foundation, giving a platform to creative ideas that bring together the traditional and contemporary within Asian culture. Dr Alka Bagri, trustee of the Bagri Foundation said, ‘We are excited to be part of an exhibition that we hope can change people’s perceptions of Tantric philosophy and its art, contributing to a greater understanding of this complex subject.’

‘Tantra: Enlightenment to Revolution’ will be shown at the British Museum till January 24 2021.

An Early Day Motion was tabled in the UK Parliament on September 14 to acknowledge the 125th anniversary of the Confederation of Indian Industry (CII). The Early Day Motion stated that ‘this House congratulates the Confederation of Indian Industry as it marks its 125th year in shaping India’s development journey and notes that this year, more than ever before, it will continue to proactively transform Indian industry’s role in Nation building, not only in India but in the UK as well. The House takes the opportunity to thank the CII for its role in representing Indian industry in UK and recognises the huge contribution made by the 850 Indian companies in the UK by creating over 110,793 jobs and contributing £41.2 billion in revenue, noting the encouraging figures published in the India Meets Britain Tracker of the CII and Grant Thornton; and urges the Governments of India and the UK to enter into a Free Trade Agreement to encourage preferential economic partnership between the two countries.’