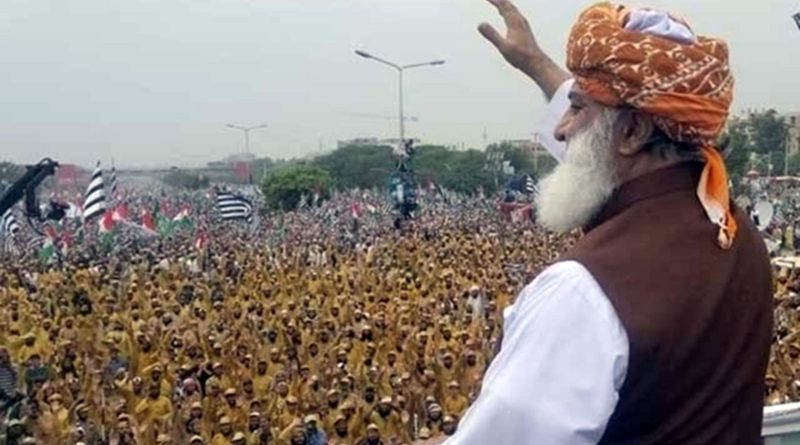 Antagonism towards the PTI government is gathering pace across Pakistan but, warns Rahimullah Yusufzai , the PDM opposition alliance may face obstacles on the road to change

Confrontations between the Pakistan Tehreek-e-Insaf (PTI) government and the 11-party opposition alliance, Pakistan Democratic Movement (PDM), has intensified as the latter has started holding a series of big public meetings to pressurise Prime Minister Imran Khan into resigning.

The PDM leaders, particularly its head Maulana Fazlur Rahman and deposed Prime Minister Nawaz Sharif’s daughter Maryam Nawaz, have claimed that, with public support, the government could be ousted by December. They argued that the ‘selected’ prime minister had panicked after witnessing the huge public meetings staged by the PDM and was responding vindictively by using state institutions to politically victimise his opponents. New cases have been filed against some opposition leaders, mostly belonging to the PML-N,while Maulana Fazlur Rahman, who has been the most active over the past two years in bringing the opposition parties together on one platform to challenge the government, could be summoned any time by the National Accountability Bureau (NAB), charged with having assets beyond his known sources of income.

Various public meetings have formed part of the PDM’s anti-government campaign. One took place on October 16 at Gujranwala, a stronghold of Nawaz Sharif’s PML-N in Punjab province, and two days later a rally was held at Karachi, capital of Sindh, ruled by Bilawal Bhutto Zardari’s PPP. The Karachi rally took place on the 13th anniversary of the terrorist attack that targeted the late Benazir Bhutto’s vehicular procession as she returned from self-exile on October 18, 2007, killing 139 participants and injuring another 450. Although Bhutto survived that attack, she was assassinated by terrorists two months later on December 27 while leaving a public meeting she had addressed in Rawalpindi.

The PDM next showed its strength at Quetta in Balochistan province on October 25, and has also scheduled public rallies at Peshawar in Khyber Pakhtunkhwa and other big cities across the country until the end of this year. In January 2021, the group is planning a ‘long march’ to the federal capital, Islamabad, in a bid to paralyse and oust the PTI government. This would be the final push by an increasingly aggressive opposition if the government doesn’t fall by December, as the group predicts.

Formed on September 20 on the occasion of the all-parties conference convened by the PPP in Islamabad, the PDM is hoping to achieve its objectives by the end of this year or by early 2021. Its leadership aims to strike when the government is relatively weak due to its thin majority in the National Assembly and low numbers in the Senate. They do not want the PTI to still be in power by March next year, when the Senate election is due to be held, as the ruling party would by then be in a position to increase its numbers in the Upper House of Parliament and strengthen its hold on power. Currently, the opposition has a majority in the Senate and is able to block legislation and harass the ruling party.

The PDM is seeking to exploit rising public dissatisfaction with the government due to unprecedented price hikes, record unemployment and frequent shortages of wheat, sugar and other everyday items. On an almost daily basis the government has been promising measures to check price rises, though without much success. Wheat and sugar have been imported for use in the agricultural country that was recently exporting these commodities.

Having adopted an elaborate 26-point resolution as a charge-sheet against the government at the multi-party conference in Islamabad, the PDM came up with a seven-point action plan to mobilise people throughout Pakistan.

The PML-N, with its support base in Punjab, and the JUI-F with its street-power, primarily in Khyber Pakhtunkhwa and Balochistan, where students of madrassas affiliated with it are numerous, pose the biggest challenge to the government. The threat posed by the PPP, with its base in Sindh, would remain manageable as long as it is in power in the province. Also, their leftist and secular leanings mean the PPP leaders feel uncomfortable being led by a cleric, Maulana Fazlur Rahman, due to their ideological differences. This is why PPP chairperson Bilawal Bhutto Zardari proposed a rotation policy for those heading the PDM, so that the Maulana doesn’t remain its head forever.

The PTI government is hoping and trying to exploit differences that exist among the PDM’s disparate components, particularly the two major ones, the PML-N and PPP, and also the Islamic parties and Pakhtun and Baloch nationalists. It faced accusations of manoeuvring to create differences between the PML-N and PPP when retired Captain Mohammad Safdar, a leader of the PML-N and Nawaz Sharif’s son-in-law, was arrested by law-enforcement agencies in Karachi for violating the sanctity of the mausoleum of the nation’s founder, Mohammad Ali Jinnah, by raising slogans there along with his party’s activists, who included his wife Maryam Nawaz. Bilawal Bhutto Zardari and the PPP-led Sindh government alleged that the Sindh police chief had been forced to register the case against Safdar after being taken at night to the offices of a so-called sector commander, who apparently belonged to the Rangers. All senior police in Sindh went on leave as a mark of protest against the insult heaped on their police chief.

However, a crisis was averted when Safdar was bailed out and Pakistan Army chief General Qamar Javed Bajwa phoned Bilawal Bhutto Zardari and ordered an inquiry into the incident. Such episodes are vitiating the atmosphere and helping the opposition’s cause as they raise questions about the conduct of the federal government and security institutions.

The most important task facing the PDM will be to mobilise the people to join their campaign. The PTI has been in power for only about 27 months, and asking the masses to agitate for the removal of the government at this stage seems rather early. There is no doubt the economic situation is dire and the coronavirus pandemic has made matters worse, but it won’t be easy for the opposition alliance to convince the public that things could change for the better if the ruling party is ousted and a fresh election is held to bring a new coalition government into power.

Crucially, the opposition parties will have to resolve their differences and remain united if they want to take their movement to its logical conclusion, because the PTI government is waiting to exploit any disagreements. Questions are also being asked whether the PDM, in the next stage of its agitation, would be able to prevail upon elected assembly members from its component parties to resign, as it won’t be easy for these lawmakers to quit and face another election after having been elected for a five-year term. Other questions revolve around whether the PPP would dissolve the Sindh Assembly and sacrifice its government in the province, as demanded by Maulana Fazlur Rahman. The smaller Awami National Party (ANP), which is Pashtun nationality and part of the PDM, is also under pressure to quit the Balochistan government.

The biggest question mark surrounds UK-based Nawaz Sharif’s future plans. A proclamation has been published in two Pakistani newspapers and displayed outside his house in Raiwind near Lahore on the orders of the Islamabad High Court: he must appear in court on November 24 or face legal action. The court could order the confiscation of Sharif’s properties, punish him in absentia or order other adverse action. He has said he cannot return to Pakistan until his medical treatment for a heart ailment is complete; yet, having gone to London last November on the recommendation of doctors, intervention of courts and permission of the federal government, he has yet to seek treatment.

In a speech he made via video link, Sharif upset Pakistan’s powerful military by publicly criticising it for interfering in politics and installing and removing elected governments. He even named the Army chief General Bajwa for removing him from power, making fake corruption charges against him and rigging the July 2018 general election in favour of Imran Khan.  By taking such a tough stand against the military, Nawaz Sharif seems to have burnt his boats and is unlikely to return home. In his absence, his PML-N may suffer defections and the PDM’s anti-government campaign could face roadblocks.