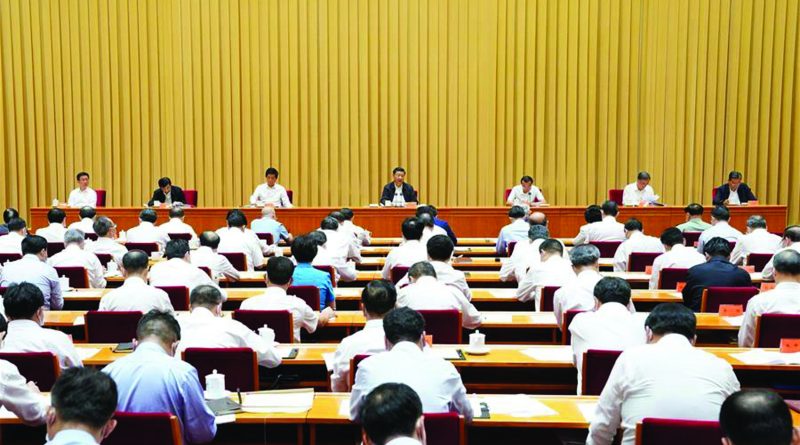 Richard Gregson reports on the draconian, and escalating, Chinese government measures that are threatening the culture, values and lifestyle of the Tibetan people

Even as the Chinese Communist Party (CCP) implements its forced labour migration policies with renewed vigour, tensions on the Ladakh border have led to increased surveillance of the local population and a crackdown on dissidents in the Tibet Autonomous Region (TAR) and other Tibetan areas of China.

Officials have carried out over a thousand anti-separatism education sessions across Tibet, according to reports in the state-controlled media. The campaign was allegedly intended to make ‘the people of all ethnic groups feel the care and concern of the Party Central Committee’, and sessions included songs, dances and sketches in ‘easy to understand language’.

Such ‘education’ is part of an ongoing programme to identify young, able-bodied Tibetan peasants or those used to a nomadic way of life in order to train them in various skills to work in factories and other establishments in different parts of China.

In the meantime, the Seventh Tibet Work Forum (TWF) was held in Beijing on August 28-29 this year. It laid out plans for the next five years with emphasis on ‘patriotic education’, adapting Tibetan Buddhism to ‘socialism with Chinese characteristics’ and countering ‘separatism’ and the ‘Dalai clique’, a term used to separate the ‘clique’ from the Dalai Lama, with whom the CCP tacitly wants to keep the channels of communication open. The Dalai Lama, the supreme Buddhist spiritual leader, has been in exile in India since the occupation of Tibet by China 70 years ago.

China occupied Tibet after Chinese troops entered the region in 1950 in what Beijing described as a ‘peaceful liberation’. But the religiously inclined Tibetans have never truly integrated with China. Tibet has seen the worst repression and ethnic cleansing, with largescale settlement of Han Chinese in the region. It is one of the most restricted areas of China, and one of the most prone to unrest.

The Seventh TWF – attended by some 300 senior party functionaries, including the entire Politburo Standing Committee –resolved to step up the party’s penetration into each village and to strengthen national unity, with emphasis on the use of Mandarin rather than Tibetan in schools. This language policy has already been enforced in Tibetan areas surrounding the main Tibetan plateau (TAR), causing growing resentment among the people.

As is customary in CCP meetings, party general secretary Xi Jinping set out the tasks, calling on the party cadre to educate and guide the people and mobilise them to combat separatist activities by forging an ‘iron wall’ to safeguard stability. Xi stressed ‘patriotism’ should be incorporated into school curricula at all levels of education. There should be ‘continuous efforts to enhance recognition of the great motherland, the Chinese nation, Chinese culture, the CCP and socialism with Chinese characteristics by people of all ethnic groups’.

For the last 70 years, Buddhist monks and nuns have been subjected to ‘re-education’ and ‘patriotism’ campaigns to subjugate them to the regime’s writ. Xi wanted the process to be accelerated to rapidly dilute the Dalai Lama’s continuing influence, saying that ‘Tibetan Buddhism should be guided in adapting to the socialist society and should be developed in the Chinese context’.

Interestingly, no monk attended the seventh TWF. Even Gyaltsen Norbu, the Chinese hand-picked Panchen Lama, was nowhere to be seen. While speeches were made about the welfare of the ‘masses of all ethnic groups’ in Tibet, hardly any Tibetans were present at the meeting.

In his address, Xi Jinping outlined ‘The Ten Musts’ to ‘fully implement the party’s strategy of governing Tibet in the new era’ and to build a new, modern socialist Tibet that is ‘united, prosperous, civilised, harmonious and beautiful’.

While massive infrastructure projects such as dams are being built to harness Tibet’s water resources for energy, and roads and railway lines criss-cross the plateau, China has been forcing increasing numbers of rural Tibetans into military-style training centres, where they are turned into labourers. The Uyghur Muslims in the Xinjiang region have been subjected for years to similar ideological-cum-vocational training, sent out to different parts of China as low-paid factory, construction and agricultural workers.

A notice posted on the website of Tibet’s regional government said over half a million people were trained as part of the project in the first seven months of 2020 – around 15 per cent of the TAR’s population. Of this total, almost 50,000 were transferred into jobs within Tibet, and several thousand sent to other parts of China. Most end up in low-paid jobs, including textile manufacturing, construction and agriculture, according to Tibet watchers.

‘This is now, in my opinion, the strongest, most clear and targeted attack on traditional Tibetan livelihoods that we have seen almost since the Cultural Revolution of 1966 to 1976,’ says Adrian Zenz, an independent Tibet and Xinjiang researcher, who compiled the core findings about the draconian programme for the Jamestown Foundation, a Washington-based institute that focuses on policy issues of strategic importance to the US. ‘It’s a coercive lifestyle change from nomadism and farming to wage labour.’

This new policy promoting the systematic, centralised and large-scale training and transfer of ‘rural surplus labourers’ to other parts of Tibet, as well as to other provinces of China, was introduced in 2019 and 2020. The scheme embraces Tibetans of all ages and covers the entire region. It mandates that pastoralists and farmers are to be subjected to centralised ‘military-style’ vocational training to reform ‘backward thinking’ and ‘laziness’. This also includes training in ‘work discipline’, law, and the Chinese language. The Jamestown Foundation report says that the training regimen is supervised by People’s Armed Police drill sergeants and the Tibetan trainees are made to dress up in military fatigues.

The project forms part of the CCP’s poverty alleviation programme, which underlines that the state must ‘stop raising up lazy people’. Documents culled from different Chinese state sources by researchers reveal the ‘strict military-style management’ of the vocational training process which, according to the documents, ‘strengthens weak work discipline’ and reforms ‘backward thinking’. Tibetans need to be transformed from being ‘unwilling to move’ to becoming willing to participate. All this requires ‘diluting the negative influence of religion’. The TAR administration has also launched a scheme that ‘encourages’ Tibetans to hand over their land and herds to government-run cooperatives before joining the training process.

‘There is the assertion that minorities are low in discipline, that their minds must be changed, that they must be convinced to participate, ’says Zenz.

Moving surplus rural labour into industry is a key part of China’s drive to boost the economy and reduce poverty. But in regions like Xinjiang and Tibet, with large ethnic populations and a history of unrest, rights groups say the programmes include an outsized emphasis on ideological training. The transfers invariably have coercive elements.

Some of the policy documents and state media reports reviewed by Reuters, which carried a detailed report on forced labour, make reference to unspecified punishments for officials who fail to meet their ‘quotas’ for sending interns for training. One prefecture-level implementation plan called for ‘strict reward and punishment measures’ for officials.

For Matteo Mecacci, president of the US-based advocacy group the International Campaign for Tibet, ‘these recent announcements dramatically and dangerously expand these programmes, including “thought training” with the government’s coordination, and represent a dangerous escalation’.

Richard Gregson is a journalist, writer and Tibet-watcher currently based in Canada