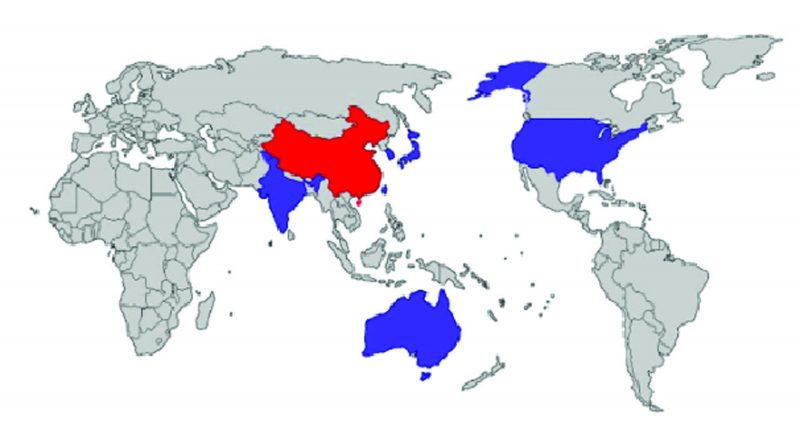 Rise of the Quad

As Indo-Pacific nations join forces to bolster regional security and counter Chinese expansionism.  Yvonne Gill  looks ahead to a potential ‘NATO of the East’

India, a major global military and economic power, is emerging as a key player in the geopolitics of the Indian Ocean and Indo-Pacific regions. The country is a pivot of the Quadrilateral Security Dialogue – known as the Quad – which has grown in importance over the last few years. This loose grouping began in the early 2000s, not as a strategic endeavour, but as an international response to the devastating 2004 tsunami that ripped through the Indian Ocean region. Three years later, at the behest of Japan’s then-prime minister Shinzo Abe, top officials from Australia, Japan, India and the United States convened the first ‘Quadrilateral Security Dialogue’ to address the region’s geopolitical concerns.

China’s aggressive military build-up and belligerence since the rise of Xi Jinping as head of the Chinese Communist Party (CCP) and the country’s President have forced democracies in the Asia-Pacific to draw closer to each other in order to build a security ‘fabric’ to ‘confront the challenge posed by China’s Communist Party’, as US Secretary of State Mike Pompeo rightly pointed out when speaking to Japan’s Nikkei newspaper. Pompeo lashed out at China’s bullying, corruption and coercion, saying the choice for the world was ‘between freedom and tyranny’.

According to Narushige Michishita, vice president of the National Graduate Institute for Policy Studies in Tokyo, the Quad is now becoming ‘more serious and concrete’.

While each of the Quad states valued relationships with China, said Michishita, they also realised they could engage more effectively if they ‘speak in one voice and pressure China to move in the more cooperative path’.

There is also talk of an Asian version of NATO to contain China’s expansionist ambitions. NATO Secretary-General Jens Stoltenberg is on record as saying that China’s rise as a superpower is ‘fundamentally shifting the global balance of power’ and that NATO should ‘become more global’. US Deputy Secretary of State Stephen E. Biegun went a step further and suggested at a US-India strategic dialogue on August 31 that the Quad could be the beginning of a NATO-type alliance in Asia.

Biegun argues that the Asian NATO would not merely be about countering China, but could focus on coordinating the militaries and economies of the region’s smaller nations around a rules-based value system.

‘It is a reality that the Indo-Pacific region is actually lacking in strong multilateral structures, They don’t have anything of the fortitude of NATO or the European Union.’

Other analysts feel that a more workable alternative could be a ‘Quad Plus’ grouping of countries, built around non-military initiatives such as infrastructure financing support from the US, Japan, Australia and others with an eye to countering China’s strategically ambitious Belt and Road Initiative (BRI), a massive overseas infrastructure investment programme.

David Maxwell, a retired US Special Forces Colonel and East Asia expert with the Foundation for Defense of Democracies, suggests the establishment of the ‘Blue Dot Network’ that the US, Japan and Australia announced last year. It envisages assessment and certification of infrastructure development projects in the Indo-Pacific and beyond. The Economic Prosperity Network, which the Trump administration has set up to reduce global supply chain reliance on China, could also become the ground work for expanding the Quad along non-military lines.

While assiduously working to make the Quad an effective bulwark against the CCP’s machinations, India is also taking action to bolster the integrity of technology and telecommunications networks, as well as to make the Quad more inclusive.

While highlighting the twin threat from Pakistan and China, India’s Chief of Defence Staff (CDS) General Bipin Rawat stated that India wants the Quad to become a system to ‘ensure Freedom of Navigation (FoN) and Freedom of Navigation Operations (FONOPS)’ in the Indian Ocean and its environs.

‘As far as the Quad is concerned, we feel this is a good arrangement which will ensure that in the Indian Ocean Region (IOR) and all other oceans around, there is complete FoN without fear of any other nation singularly trying to dominate the oceans,’ General Rawat said in a webinar hosted by the US India Strategic Partnership Forum, emphasising that ‘we are very keen to ensure that there is complete FoN on the seas and in the airspace above’.

India already has military logistics support agreements with all the Quad countries – a significant step towards improving interoperability. Similar agreements with the UK and Vietnam are under discussion, while the Reciprocal Logistics Support Agreement with Russia is expected to be signed soon. Notably, the agreement gives India access to Russian facilities in the Arctic region as new shipping routes open up due to melting ice as the sea gets warmer.

India-Australia Mutual Logistics Support (MLSA) is described as a Comprehensive Strategic partnership. The Reciprocal Provision of Supplies and Services between armed forces has been signed by India and Japan and, in September, the Indian Navy and the Japan Maritime Self-Defence Force (JMSDF) held joint exercises in the North Arabian Sea.

India has signed several logistics agreements with the US, including the Logistics Exchange Memorandum of Understanding (LEMOA), signed back in 2016. India’s maritime interactions with the Quad countries include joint anti-submarine exercises with Australia in the IOR. The Andaman and Nicobar Islands, located close to the strategic Strait of Malacca, a strategically crucial shipping lane, make these exercises significant for the region’s peace and security.

Furthermore, a Communications Compatibility and Security Agreement (COMCASA) with the US has given India access to encrypted communication systems. Two CENTRIXS (Combined Enterprise Regional Information Exchange System) kits, loaned by the US, have been installed at the Indian Naval headquarters.

The Malabar 2020 naval exercises between India, Japan and the US, due in November, are being closely watched around the world. If the Australian navy participates, it will be a full Quad operation. However, it is said that New Delhi wants to use Australia’s inclusion as a bargaining chip with Beijing during negotiations relating to the Ladakh border stand-off.

Come what may, it seems clear that China is becoming more and more isolated, raising serious doubts at home about the course being pursued by Xi Jinping. It has almost zero alliances, or has been partnering with countries that are unreliable, weak and minor players in the great Asian geopolitical game plan. While the strongest among these, Russia, is wary of China’s growing strength, other countries include pariah states like North Korea and Pakistan, while Cambodia, another ally, is too small to wield any influence. States which have joined China’s BRI are sceptical or reluctant partners, as they have no other option to fall back on.

The CCP can continue its present polices only at its peril.