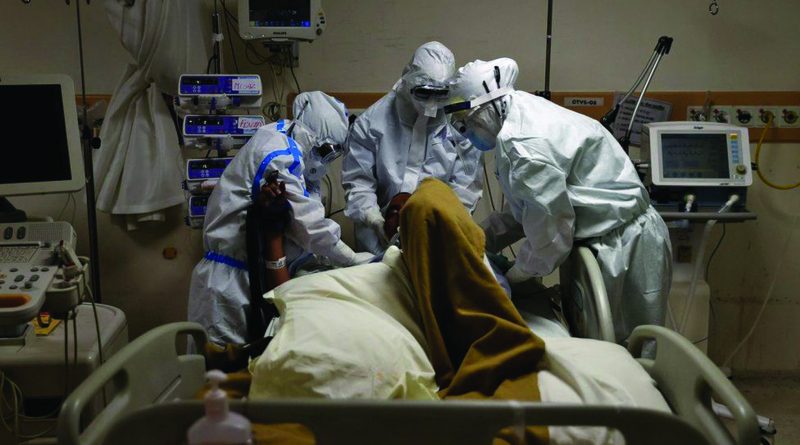 With India’s Covid virus infections surging to nearly 8 million, fears loom that the Asian powerhouse may be unable to cope with the medical challenge posed by the pandemic, and that its giant economy may take years to recover from the blow.

Covid infections in India stood at a cumulative 7.87 million on October 24, a million less than the US’ 8.83 million cases. The country’s leadership claims its Covid tally peaked in September and the rate of new infections is now declining, though most experts are sceptical about this assertion.

While the US has tested nearly 39 per cent of its population, India has managed to test just 7.5 per cent of its 1.3 billion people, and most of them with the less dependable rapid antigen test. India’s testing record is the lowest among the top six infected nations, yet its tally of deaths stands at just 86 per million, by far the lowest among the top 15 infected nations. These statistics, lead virologists and many others to believe the country’s infection and death numbers are hugely understated.

A sero-virus survey by the highly respected Indian Council of Medical Research released at the end of September this year shows that some 7 per cent of all Indians – 62 million – may have been exposed to the Covid-19 virus at some stage.  The sero-virus test checks for the presence of Covid-19 antibodies created by a previous infection in healthy humans.  The ICMR’s survey was conducted by drawing blood samples from some 6.4 million adults spread over 21 Indian states, which showed there were 26-32 infections for every confirmed Covid-19 infection in India.

Since the Covid pandemic broke out, India’s tax revenues have fallen massively

The alarming revelation came at a time when medical experts warned that antibodies created by a Covid-19 infection are not enough to give a person immunity from re-infection at a later date.

With just 1.34 doctors and 0.7 hospital beds per thousand people, the rise in infections is already seriously straining the capacity of public healthcare in India. Any spike in numbers caused by the onset of winter, when the virus may become more potent, and a festival season when people in the densely populated country may gather publicly, poses greater risks.

Doctors in the state of West Bengal recently appealed to the state’s Chief Minister to take coercive steps to police festivities, fearing the state’s infrastructure might buckle under a ‘tsunami’ of Covid-19 cases as people gather and travel for the annual festival dedicated to the Hindu goddess Durga.

Added to that is the challenge of inoculating India’s mammoth population. Adar Poonawala, CEO of Serum Institute of India, which is manufacturing some 1 billion doses of Oxford-Astra Zeneca’s Covid vaccine in India, estimates it will cost India Rs 800 billion to buy and distribute the vaccine.

Yet negotiating purchases of the vaccine from one or more manufacturers is the least of India’s problems, say experts. A continental-sized cold chain would have to be created to take the vaccine to India’s millions of villages and a huge army of medical personnel conjured up to physically vaccinate even priority sections of the populace.

Until India manages to resolve these issues, fears will not abate that the pandemic will continue to rampage and reap a crop of death through the subcontinent for years.

The cycle of infections is not only posing a challenge to India’s rickety public health infrastructure, but also to her economy, which is estimated by the country’s central bank to have already shrunk by nearly 24 per cent in the April-June quarter. And in a separate forecast released in October, the International Monetary Fund warned that the Indian economy, one of the major drivers of world growth, may contract by 10.3 per cent for the whole of 2020, due to the hit it has taken during the pandemic.

India has fared much worse than most major economies in the post-Covid world as its informal sector is by far the largest, accounting for some 45 per cent of India’s $2.9 trillion GDP. A strict lockdown in the first three months from March, when the pandemic spread to India, virtually brought that sector to a standstill. Tens of millions lost their jobs, with no recourse to unemployment benefits, and hundreds of thousands of small businesses closed without any compensation.

Many economists argue that the decline in GDP in the first quarter could have been as large as 32-35 per cent if the full impact on the informal sector is calculated. What is certainly on record is that, during April-June 2020, private consumption in the country shrank by 27 per cent, while investment by private businesses fell by a whopping 47 per cent.

The Indian Government, hamstrung by a huge fall in revenue and a rise in public debt, has been unable to unleash the kind of fiscal measures its peer economies have resorted to, in order to reverse the plunge in its economic fortunes.

While the US came up with a fiscal stimulus package worth 13.3 per cent of its GDP, which included payroll support for small businesses and benefits for out of work tax-payers, nearer home Australia bankrolled a stimulus worth 10.8 per cent of its GDP and Singapore a massive 20 per cent.

By contrast, India announced direct fiscal stimulus calculated to be worth just 2 per cent of its GDP, which research firm Nomura described as ‘underwhelming’. In a recent note to the country’s monetary policy committee, Michael  D Patra, Deputy Governor of India’s central bank, the Reserve Bank of India, said: ‘If projections hold, the level of GDP would have fallen approximately 6 per cent below its pre-COVID level by the end of 2020-21 and it may take years to regain this lost output.’

Still, many point out that India can ill afford to come up with guns roaring to beat the economic fallout of the pandemic, as its finances are far from robust. Since the Covid pandemic broke out, its tax revenues have fallen massively – by 32 per cent in the April-June quarter – forcing the government to run up a revenue deficit during April-August of 121.9 per cent of its budget, and to increase its borrowing by 50 per cent to a record Rs 12 trillion. As a consequence, India’s debt to GDP ratio is slated to increase to a record high of 89.3 per cent by the end of this year.

However, by trying to save itself from getting deeper into the red by introducing income support and public works programmes, which could create jobs and push up demand, India risks sinking deeper into a morass of slower than normal growth, risking social tensions and political upheavals.

Surveys ahead of an election to India’s third most populous state Bihar’s legislative assembly, to be held in November, have shown rising unemployment is the most important issue for youth in that state. Since the country’s economy opened up in the early 1990s by discarding socialist policies in favour of market economics, Indians have got used to a GDP growth rate of 6-8 per cent annually. A shrinking or slowing economy, coupled with massive unemployment, is a harsh reality which several generations have not yet seen nor learnt how to cope with.

If India is unable to resolve these challenges thrown up by the Covid-19 virus, it may yet face a far bigger challenge to its social and political stability. The other side of the pandemic could well be a long drawn out winter of discontent.