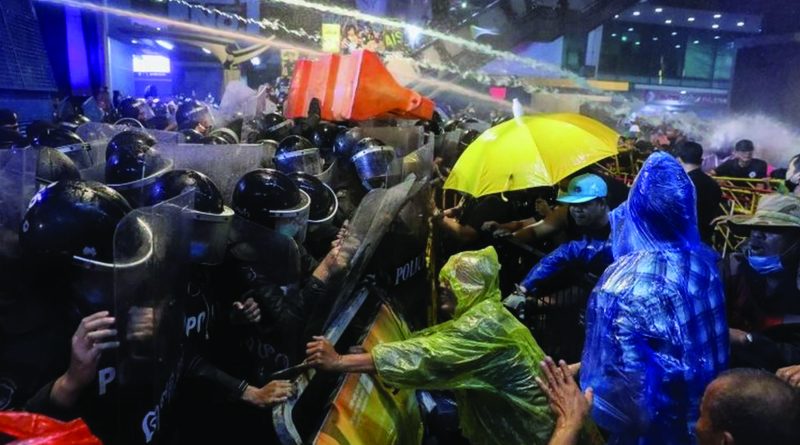 What began with demonstrations by young Thais in Bangkok and calls for the prime minister to resign has turned into demands for the reform of Thailand’s once revered monarchy. Nicholas Nugent reports

Thailand has one of the world’s oldest monarchies, one of few remaining in Asia. Since 1932 it has been regarded as a constitutional monarchy, with the king wielding symbolic rather than actual power, which is the preserve of the elected government and prime minister. The system has worked well and when the armed forces stage a coup d’état – as has happened 12 times since 1932 – it is the government of the day rather than the royal head of state that is displaced.

However, the monarch – currently King Maha Vajiralongkorn, tenth ruler of the Chakri dynasty and also known as King Rama X – is well protected and, until recently, well respected. The present king’s father, King Bhumibol Adulyadej, who ruled for 70 years, was genuinely respected and loved by a majority of his nearly 70 million subjects, if the adulation shown when he visited the provinces or appeared in public in Bangkok is a valid indicator.

One measure of the protection afforded successive monarchs is the country’s strict lèse-majesté provisions which make any criticism of the monarch tantamount to treason, with violators facing up to 15 years’ imprisonment. Discontentment is therefore often reflected indirectly. Hence the young Thais gathering on the streets of Bangkok initially challenged the validity of the March 2019 elections and called on prime minister Prayut Chan-ocha to resign. Wearing military uniform, General Prayut led Thailand’s most recent military coup in May 2014 before reinventing himself as a civilian politician.

Latterly, though, demonstrators have made it known that their real target is the king, especially his absence from Thailand for most of the year in Bavaria, southern Germany, where he has a mansion and has taken over a hotel in a nearby Alpine resort. They criticise his womanising, lavish spending, casual appearance (‘tattooed’ with henna and wearing a crop top), and eccentric habits, which have included making his pet poodle an air chief marshal. What seems to hurt most is that his lifestyle is funded out of Thai taxes. Hence the demonstrators’ slogan ‘We are not slaves’ and the hashtag on their main messaging system #whydoweneedaking?

The government declared an emergency, limiting the right to assemble and introducing censorship

Doubts about the young prince’s suitability to reign were first voiced during his wild youth, spent partly in Britain and Australia. There was talk of changing the constitution to enable his popular younger sister to assume the throne; but that came to nothing and King Bhumibol indulged his son’s eccentric lifestyle.

When King Bhumibol died in October 2016, Vajiralongkorn, then aged 64, became king. He was crowned in an elaborate ceremony last year on a day chosen as auspicious by senior Buddhist monks. For a time, his residence abroad was tolerated by his subjects. The German authorities are said to be displeased at his violation of coronavirus lockdown and quarantine provisions as he flits freely to and from his Bavarian base on his personal Boeing jet. In Thailand there were murmurs of complaint that he was apparently not suffering the privations enforced by the pandemic, as his subjects were.

Another cause for concern was Vajiralongkorn’s alleged interference in last year’s general election, which included barring his elder sister, Princess Ubolratana, from standing as a candidate and seemingly siding with the party of former general Prayuth. The monarch is, after all, meant to be above politics. The election accentuated the split between so-called yellow shirts, or loyalists, and supporters of a popular former prime minister, Thaksin Shinawatra, now living in exile, whose people-focused policies made him the figurehead of the so-called red shirts. The king also took personal control of the armed forces based in the capital, in violation of the constitution, and of crown assets estimated to be worth US$40bn.

It is not as if there is an open republican movement in Thailand and the youthful demonstrators, who are not tied to any political party, would more accurately be described as pro-democracy than anti-government or anti-monarchy. However, the red shirts now openly support a ten-point programme for reform of the monarchy to make it more accountable to parliament financially, and regarding how the king carries out his role. The yellow shirts, who are just as capable of mounting large protest demonstrations (as they did before the 2014 coup) have assumed a role as defenders of the status quo.

When the Bangkok demonstrations reached a crescendo in mid-October, the security forces used water cannons to try to disperse them, with little success. At least 80 protestors were arrested, only increasing demands for reform. The government declared an emergency, limiting the right to assemble and introducing censorship, and tried to block the Telegram messaging service used to organise demonstrations. The emergency was revoked after a week.

So what happens next? With both king and prime minister suffering what might be termed ‘a popularity deficit’, there appears to be an impasse between rival groups that fresh elections are unlikely to resolve. It is possible that Prime Minister Prayuth will react to the clamour and initiate revision of the now discredited constitution that he introduced three years ago. Less likely, given the military-dominance of both the upper house of parliament and cabinet, is that the armed forces will intervene to depose yet another government.

There are, of course, precedents for change beyond Thailand. Forty-one years ago Iran overthrew its monarch, the Shah, to become an Islamic Republic. Nepal renounced its centuries-old monarchy in 2012 in favour of a republican structure. Constitutional monarchs preside, but no longer rule, in Japan and Bhutan. Malaysia has an unusual monarchy in which hereditary state sultans take turns to be king. The sultan rules supreme in Brunei and emirs rule in several Gulf states, while the king presides in Saudi Arabia. Europe has several monarchs as titular yet powerless heads of state.

For Thailand, change has already arrived. Criticism of the monarchy and its incumbent is no longer beyond bounds. It is impossible to envisage the lèse-majesté laws ever again being used to silence critics.

What is also certain is that the semi-divine status of the Thai monarch has gone forever and henceforth the activities of the king will be monitored closely by those who feel he no longer has a role to play. October’s mass street demonstrations are unlikely to mark the end of the story.

Nicholas Nugent has followed elections, protest demonstrations and coups in Thailand over many years