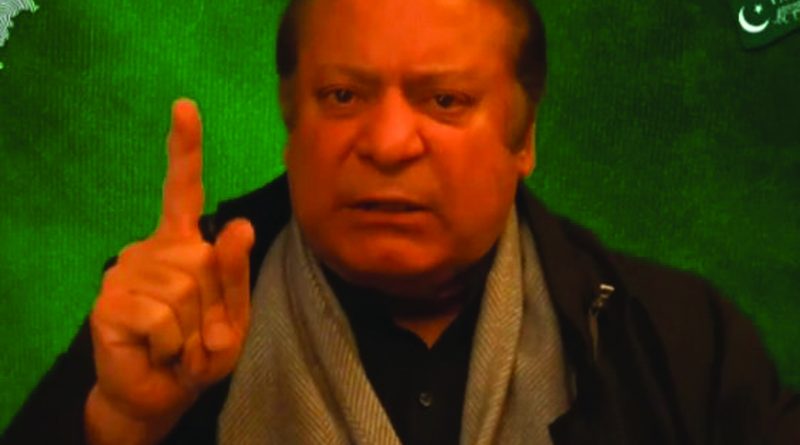 Pakistan’s army and ISI chiefs may currently look weak, but the military itself does not. The task falls to the opposition, warns Ayesha Siddiqa, to ensure the generals don’t return

It looks like it’s time to grab a bag of popcorn and watch this game because Pakistan’s politics just became thrilling again. The political opposition, which up until a year ago was made to look redundant, is back in action and ready to take on not just Prime Minister Imran Khan but also Army Chief Qamar Javed Bajwa, ISI chief Faiz Hameed and their cabal on a roller coaster ride. The message that the newly formed coalition, the Pakistan Democratic Movement, has conveyed to Rawalpindi is to immediately jettison the Khan government and pave the way for holding free and fair elections that could generate different results from those we saw in 2018.

It would be foolhardy to give a date or time for the change of government in Islamabad, but the head of the Pakistan Muslim League-Nawaz (PML-N), Nawaz Sharif, is playing aggressively to increase the cost of running a hybrid political system for the army and Inter-Services Intelligence (ISI) chiefs. For a political army, lack of legitimacy is an institutional anathema. When politicians show it the red rag, such an army either charges to vanquish, or the matador wins, thus creating greater space for civilian life. A lot will depend on how much and for how long General Bajwa can keep his officer corps aligned behind him.

Sharif back in the game

The direct naming and shaming of top generals – and that too by Nawaz Sharif, a mainstream leader from Punjab – is a first in the political history of Pakistan, which has experienced direct military rule for 17 years and indirect influence by various means for the rest of its 56 years. Until early this year, the military’s supporters would say privately that Imran Khan was there to stay because the army had brought him for at least a decade. Given the media gag, restrictions on freedom of speech, harassment of political activists and much more, the plan looked doable.

In many ways, Khan has brought the relative strengthening of the political opposition on himself – poor management of the government and economy began to drill a hole in the prime minister’s popularity. In the name of eliminating corruption, which he is unable to do, Khan also managed to aggravate the civil bureaucracy, which is fearful of being hounded by the National Accountability Bureau (NAB), Pakistan’s primary anti-corruption body, resulting in inertia within the civil service. Since coming to power, the prime minister has also shown little interest in anything other than targeting Nawaz Sharif.

However, as Sharif has indicated, his duel is not with Prime Minister Khan but the generals, popularly referred to as Khan’s ‘selectors’.

In the 1990s, there was hardly anyone in the outside world, or not from the PML-N circuit, who thought of Sharif beyond his inclination for Lahori gastronomy. I remember conversations with some of the Pakistan hands in Washington during the 2000s. They never took Sharif seriously and were guided by the popular narrative about him. But he has learnt from his years in politics, and definitely how to get back in the game. Nawaz Sharif is certainly no Zulfikar Ali Bhutto, who died fighting a military dictatorship. But he is a Punjabi, who has, over the years, managed to build a sizeable clientele and following among the civil and military bureaucracies and the capitalist class in Pakistan’s largest province. He is also a political survivor, who has shown the capacity to push back yet again.

His two recent speeches – Gujranwala and Quetta – indicate his resilience to return to the ring. Any retaliation will win the PML-N more space, as was demonstrated by the hybrid regime’s retaliation to Sharif’s Gujranwala speech. The ISI tried to crack its whip and forcibly arrest Sharif’s son-in-law, Captain (ret’d) Muhammad Safdar from his hotel room in Karachi in the wee hours of the morning. The fact that Safdar was in the room with his wife Maryam Nawaz was meant to send a crude message to the PML-N leadership. An intelligence agency used to picking up ordinary people with impunity from around the country and making them disappear didn’t realise the cost of its action in this case.

The fact that it was done in such a shoddy manner – kidnapping the Inspector-General of the local police and forcing him to sign the police report that could enable the ISI men who led the team to make the arrest – resulted in a pushback from both the Sindh government and the Sindh police. While the story was wrongly and maliciously reported by segments of the Indian media as a civil war, demonstrating how little is known about Pakistan, the incident was a significant case of inter-institutional rift that came at the back of increased consciousness in the country that Khan has weakened the army chief. Tired of constant intervention by the paramilitary and army, the police pushed back, leaving a mark on the military’s morale. The incident was an embarrassment for General Bajwa, who had to call Bilawal Bhutto Zardari and assure an inquiry into the matter.

It was as big a faux pas as the paid sit-in by Tehreek-e-Labbaik (TLP) in Faizabad, Islamabad in 2017 against the PML-N government. The Karachi incident exposed yet again the ISI chief’s ineptitude in handling domestic political affairs. If the army was banking on breaking the Pakistan Peoples Party (PPP) away from the Pakistan Democratic Movement, its action in Karachi did the opposite.

Nawaz Sharif’s Quetta speech demonstrated a skilful hand – the PML-N leader tried to not only put distance between Imran Khan and his military backers but also between General Bajwa and his few merry men, and the army as an institution.

‘It is our army, we should love them and show them respect as long as they follow the constitutional remit,’ was Sharif’s message. He tried to tell the rest of the generals that the PML-N and the army could start afresh only if the generals got rid of the Bajwa-Faiz duo and their team. It is certainly unprecedented for a politician to incite the institution so openly to rebel against its top command, which has increasingly brought disrepute to the army through its closeness to an inefficient political government. Interestingly, the ploy of labelling Sharif as a traitor may not work. The ordinary Pakistani is too tired of Khan’s mismanagement and has begun to point a finger at the generals who brought him to power.

However, journalist Imad Zafar says that Sharif aimed at more. Sharif and the PDM want a rewriting of the social contract, and to ensure that future generals and officer cadre understand that a coup or a hybrid-coup is illegal.

Following the tone of the Nuremberg trials, Sharif’s message was that there will also be accountability for those who helped dictator Pervez Musharraf carry out the 1999 coup by illegally climbing the walls of the prime ministerial house. A strategic reset of civil-military relations will be essential after the tactical victory of removing Khan is achieved. As simple as it may sound, it will not be entirely easy for the GHQ to jettison Khan. The prime minister has a lot hidden in his closet that could be exposed and he may also go down fighting, which will prove equally costly for the army chief. A lot will depend on increasing the chasm inside the GHQ. An even more important issue is the lack of capacity of the opposition parties to manage a strategic transformation.

First, political parties will have to set a code of conduct for themselves, as Sharif once did with Benazir Bhutto.

Second, political parties, individually and together, will have to devise institutional structures to ensure the military’s cooperation and obedience without running the risk of threatening generals. Perhaps someone wearing a thinking hat in the parties ought to read Alfred Stepan’s discourse on how they did it in Brazil and the Southern Cone. Traditionally, civilian regimes have depended upon trusted interlocutors to talk to the military without really understanding how the institution works. Over the years, the political parties and parliament have lost the capability to control the military. There was never any effort to invest in institutional structures that would empower parliament vis-à-vis the GHQ. Work would have to begin on that score even before a change in government is made possible. A politically ambitious and technologically advanced military bureaucracy cannot be fought back without developing a core expertise that would make a cogent civil-military dialogue and a pushback possible.

Making the effort worth it

A social contract, however, has to be bigger than civil-military relations. The political parties will have to be willing to re-arrange overall socio-political and socio-economic relations beyond winning elections. It was extremely heartening, for example, to see Maryam Nawaz Sharif talk about enforced disappearances in Balochistan. The subject, as well as being irksome to the ISI, is also part of a larger problem: the absence of a political solution in Balochistan. While such brutality must stop, the PML-N will have to demonstrate its ability to right its own wrong of skewed distribution of China-Pakistan Economic Corridor (CPEC) resources to smaller provinces. Sharif’s government had given preference to the eastern route going through Punjab and Sindh, as opposed to the western route from Balochistan and Khyber-Pakhtunkhwa.

A healing touch will also have to be extended to the country’s religious and ethnic minorities that are under tremendous pressure but were not spoken about. Interestingly, no one at Quetta jalsa, including Pukhtunkhwa Milli Awami party’s Mehmood Achakzai, spoke about Shia Hazaras, one of the issues in Balochistan. Although secularism in Pakistan is not on the cards for any political party, improving relations among religious communities is a necessary part of the social reset, which is also one of its big challenges. It’s an issue that is potentially divisive and could be used in future to weaken any political government.

It’s a fact that the political opposition has created an essential milestone for itself and the state. But it will be equally significant to see what path they are capable of treading. Limiting their aspirations to a change in leadership is not worth the effort. Right now, it’s Bajwa and Faiz who look weak, not the Pakistan army. If a strategic reset is not managed, the generals will return.

Ayesha Siddiqa is a research associate at SOAS, London and author of Military Inc: Inside Pakistan’s Military Economy. She tweets @iamthedrifter. The views expressed in this article are personal