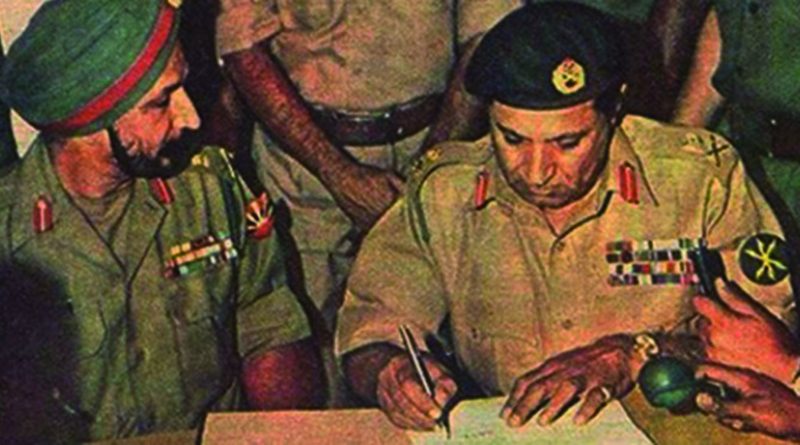 To mark the anniversary of the creation of Bangladesh, Syed Badrul Ahsan recalls the events of December 1971 and their aftermath

Forty-nine years ago, the war for Bangladesh’s liberation drew to a close. Three million Bengalis had been slaughtered by the Pakistan army, 200,000 women had been raped, whole villages and towns pillaged. On the afternoon of 16 December 1971, the commander of the Pakistani forces, General Amir Abdullah Khan Niazi, signed the Instrument of Surrender in the presence of General Jagjit Singh Aurora, commander of the joint command of Indo-Bangladesh forces.

As Bengalis celebrated the Pakistan army’s capitulation, a state of perfect gloom descended on what had till then been West Pakistan and was now all that remained of Pakistan. State television flashed continuous images of what was described as the fall of Dhaka. General Niazi, who had only days earlier vowed to fight on, telling the world’s media at the Dhaka Intercontinental that the city could only be taken over his dead body, was shown signing the document of surrender at the Dhaka Race Course.

For Pakistanis across the spectrum, such scenes led immediately to an angry outcry. In all the months that had passed since hostilities broke out between their army and the Bengali population of East Pakistan, they had been led to believe that first General Tikka Khan and then Niazi had been squarely beating the Bengalis at every turn. When India entered the war on December 3, news was spread all across West Pakistan that the Hindus (which was how most people in West Pakistan regarded India, from a communal perspective) were about to lose the war with their braver and far superior Muslim enemies. The shock, therefore, at realising East Pakistan was now Bangladesh and that the streets of Dhaka pulsated with cheering Bengalis celebrating the Mukti Bahini and the Indian army, was immense.

Demonstrations broke out across Pakistan, demanding that the junta leaders be brought to trial

Many broke down in tears. Others were soon to turn their ire against the Yahya Khan junta, which had all along been disseminating propaganda that normalcy had been restored in East Pakistan. Even as news of the surrender in Dhaka began to sink in, the war on the western front continued. Unknown to many at the time, the Nixon administration, through soliciting the assistance of the Soviet Union, was in full gear trying to persuade Indian Prime Minister Indira Gandhi to call a ceasefire on the western front. The fear in Washington, and among Pakistanis themselves, was that after helping to liberate Bangladesh, the Indian army would go on to dismantle the rest of Pakistan.

No one in the Pakistani military junta appeared before the country on 16 December to report on the calamity that had overtaken the army in Bangladesh. And Pakistan Television, after initially showing images of the surrender in Dhaka, banned any further display of such footage. Across the nation, in cities like Peshawar, Quetta and Karachi, demonstrations broke out demanding that the junta leaders be brought to trial. The next day, 17 December, the Indian government called an end to hostilities on the western front, sending a sigh of relief all over Pakistan. Rump Pakistan would not, after all, be broken into further pieces. The same day, late in the evening, President Yahya Khan spoke to Pakistanis over the radio and television, showing no contrition over the way events had turned out for the Pakistan army in Bangladesh. He vowed to go on waging a war against the enemy until final victory was achieved by Pakistan.

Even as he spoke, Pakistan’s soldiers, now prisoners of war in Bangladesh, were being herded into camps across the new countrythat was under the protection of the Indian army. And Pakistan’s local Bengali collaborators were on the run from the Mukti Bahini and Bangladesh’s people. A pro-Pakistan politician was seized by a mob in Dhaka and never seen again. An academic who had been complicit in the actions of the army was beaten and left for dead on a street in central Dhaka. In Rawalpindi, a clutch of Bengali politicians who had arrived in November to be part of new political arrangements with Yahya Khan found themselves stranded without a country to return to. Nurul Amin, named prime minister in early December, suddenly did not matter any more. Mahmud Ali and Chakma Raja Tridiv Roy knew that, having collaborated with the regime, they had nowhere to go.

In the four days between December 16 and December 20, Pakistanis in general and young military officers in particular made it clear they wanted Yahya Khan and his regime to go. At one point, General Abdul Hamid Khan, chief of staff of the Pakistan army (the army was then headed by a commander-in-chief, in this case Yahya), called a meeting of army officers in Rawalpindi cantonment and attempted to explain the causes behind the debacle in Bangladesh. He was greeted with expletives, each more profane than the last, and was eventually forced to leave the room. Hamid, who, after the Dhaka surrender, had begun nurturing ambitions to take over from Yahya, now knew the end was near. Officers like General Gul Hasan, in contact with Zulfikar Ali Bhutto, were already planning to dominate the new circumstances.

In effect, President Yahya Khan was informed in no unambiguous terms that he had to quit. And to whom would power be transferred in that case? Evidently, at that point, the one man who mattered was Bhutto, then in New York, having presented the case for Pakistan as his country’s new deputy prime minister and foreign minister. For his part, Bhutto assessed conditions from afar and would not return until he was certain he could feel safe in Pakistan. He had already entertained the United Nations Security Council with his histrionics: tearing up what looked like a copy of a ceasefire resolution, and storming outas he told the global diplomats present that he would not be a party to the dismemberment of Pakistan.

Bhutto arrived back in Rawalpindi at noon on 20 December and was immediately whisked away to the president’s house for a meeting with General Yahya Khan. He emerged a few hours later as Pakistan’s new president and, incongruously, chief martial law administrator.

Late in the evening President Bhutto addressed the nation and, in a rambling speech, promised his people he would build a new Pakistan for them. He extolled the ‘bravery’ of Pakistan’s soldiers in the just concluded war and asked forgiveness of his ‘brothers and sisters’ in ‘East Pakistan’. He showed absolutely no remorse over his role in the making of the crisis in Bangladesh, yet appeared keen to reassure Pakistanis that their future was safe in his hands. He placed Yahya Khan under house arrest and appointed new chiefs of staff for the army, air force and navy.

Two days later, on 22 December, as Bangladesh’s government-in-exilearrived in Dhaka from Calcutta, Bhutto decreed that detained Awami League leader Sheikh Mujibur Rahman, whose party had won a landslide victory at the general election a year earlier, be moved from solitary confinement in prison to house arrest. Mujib, who had declared Bangladesh’s independence in late March before his arrest by the Pakistan army, had been tried before a secret military tribunal in West Pakistan and sentenced to death on charges of treason. He and Bhutto had not met since the army crackdown in Dhaka, but on December 27, Pakistan’s new leader arrived at the rest house where Mujib had been moved.

As the Indian journalist Kuldip Nayar would later report in his book Distant Neighbours: A Tale of the Subcontinent, a surprised Mujib asked Bhutto: ‘Bhutto, how are you here?’ Bhutto’s response did not fit the question: ‘I am President of Pakistan.’ An even more surprised Mujib teased him: ‘But you know that position belongs to me’ –  evidently referring to the Awami League’s victory at the general elections of a year earlier. This time Bhutto told him: ‘I am also chief martial law administrator.’

In the next hour or so, Bhutto gave Mujib to understand that the Indian army had ‘occupied East Pakistan’ and that the two men needed to be together in the coming struggle to drive the Indians out. Mujib, ever the astute politician, knew better.

Evening lengthened into the cold hours of January 8, 1972, as President Zulfikar Ali Bhutto accompanied Sheikh Mujibur Rahman, who had been declared Bangladesh’s President while he was in prison, to Chaklala airport. As the plane carrying Bangladesh’s founding father to freedom flew off into the dark towards London, Bhutto said to no one in particular, ‘The nightingale has flown.’