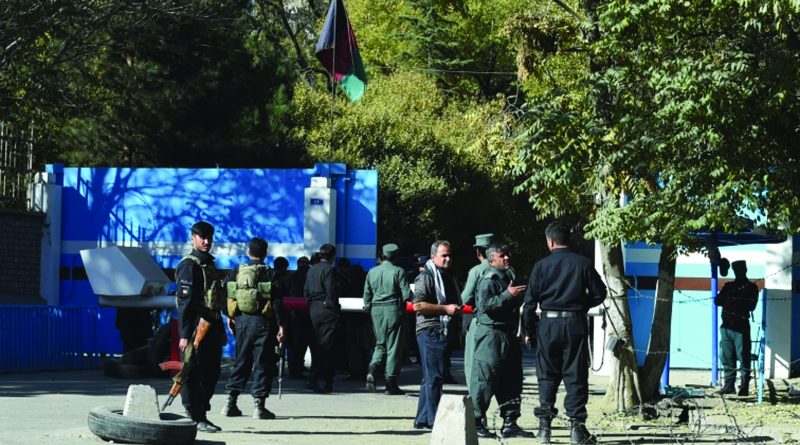 With tensions escalating between the Taliban and its erstwhile supporter Pakistan, Sudha Ramachandran assesses a rising force amongst Afghanistan’s militant groups

On November 2, three heavily armed gunmen disguised as Afghan security forces went on a rampage inside Kabul University campus in the Afghan capital. Twenty-five people were killed and 27 others injured in the attack, which extended over six hours. Most of the victims were students.

The Islamic State of Khorasan Province (ISKP), the Islamic State’s Afghan affiliate, claimed responsibility, releasing a photograph of two masked attackers who, it said, targeted a ceremony at Kabul University for ‘the graduation of judges and investigators’.

Less than ten days earlier, a suicide bomber had blown himself up near an educational centre in a predominantly Shiite Hazara neighbourhood in western Kabul, killing at least 24 people, many of them high school students, and wounding 57 others. The ISKP had claimed responsibility for that attack as well.

However, sections of the Afghan government cast doubts on the ISKP claims. Vice-President Amrullah Saleh, for instance, blamed the Taliban, tweeting that the ‘Taliban, their allies & backrs [sic] are responsible’ for the attack, and pointing an accusatory finger at the insurgent group, its ally, the Haqqani Network, and their patrons in the Pakistani government.

Although the Taliban – which is currently engaged in talks with Afghan government representatives at Doha, Qatar –rejected Saleh’s allegation, it nowturns out that the carnage was orchestrated by the Taliban-affiliated Haqqani Network. A militant known simply as Adil, who was arrested a fortnight after the Kabul University carnage, was reportedly recruited by the Haqqani Network and provided with the weapons to carry out the attack.

The question is whether the Haqqani Network carried out the attacks in Kabul alone or with the Taliban’s blessing, or if it collaborated with the ISKP in executing the operation.

A formidable insurgent group that has been active since the anti-Soviet jihad of the 1980s, the Haqqani Networkis a designated terrorist group in the United States, United Kingdom and Canada. Several of its leaders, including its current chief Sirajuddin Haqqani, figure in United Nations Security Council blacklists.

Moreover, it is known to be close to Pakistan’s Inter-Services Intelligence (ISI) and is said to act as Islamabad’s sword-arm in Afghanistan. As the main instrument of Pakistan’s Afghan strategy, the Haqqani Network has carried out dozens of attacks in Afghanistan to further Pakistan’s interests, including those targeting India’s presence in the country.

While the Haqqani Network retains a distinct identity from the Taliban, at the same time it is closely integrated into it. For instance, Sirajuddin Haqqani is a member of the Quetta Shura, the Taliban’s leadership council, and he is also one of Taliban Chief Haibatullah Akhundzada’s deputies.

In an article published in the New York Times in February this year, on the eve of the signing of the US-Taliban agreement, Sirajuddin wrote as if he was speaking on behalf of the Taliban, underscoring that the Haqqani Network was on the same page as the Taliban vis-à-vis the peace talks.

Even though the Taliban is currently engaged in talks with the Afghan government, it continues to target security forces, civilians and the ISKP. In a single week in October, it carried out 356 attacks, two suicide bombings and 52 mine explosions across Afghanistan, the Washington Post reported. It has refused to announce a ceasefire, although it has refrained from carrying out major attacks in urban areas.

So was the group behind the atrocity at Kabul University?

That seems unlikely. The attacks have generated a tidal wave of anger in Kabul, which is not to the Taliban’s benefit, especially at a time when it is seeking to improve its image, credibility and support among people in the Afghan capital.

Indeed, the attacks could even prompt the Hazaras ‘to re-arm, which is not in the Taliban’s interest’, says Dr Antonio Giustozzi, a Taliban expert with the Royal United Services Institute in London.

According to Giustozzi, the attacks in Kabul were carried out by the Haqqani Network, whether on its own or in collaboration with others, but ‘without the authorisation of the Quetta Shura’.

Major rifts have emerged within the Taliban and among its allies over its participation in talks with the Afghan government. The Haqqani Network is among those opposed to the negotiations and it could therefore have joined hands with the ISKPto carry out the Kabul attacks, in order to derail the process.

An interesting feature about the various insurgent and terror groups operating in Afghanistan is the fluidity in their relations. Consider the relationship between the Taliban and the ISKP, for instance.

The two are adversaries whose ideologies and goals differ: while the Taliban aims to establish an Islamic Emirate in Afghanistan, the ISKP’s goal is to set up a global Islamic Caliphate. To the latter, Afghanistan is a ‘province’ of that Caliphate.

Both groups have fought each other fiercely for years. The ISKP has poached Taliban fighters. And yet, at the same time, they are known to have collaborated in carrying out some attacks.

Likewise, the ISKP and Haqqani Network have collaborated in the past, despite the latter’s proximity to the Taliban. Therefore their collaboration in the recent attacks in Kabul cannot be ruled out.

The ISKP, which is strongly opposed to the peace talks – it described the Taliban as ‘apostate’ for signing an agreement with American ‘Crusaders’ – has carried out dozens of high profile attacks in recent months, especially in cities – almost as if to underline, even mock the Taliban’s abdication of the jihad.

This is a critical time for groups like the ISKP. Although it has captured global attention with its particularly brutal massacres and suicide attacks in Afghanistan, it has had to function in the shadow of the Taliban there. Under pressure from the Afghan and American forces and the Taliban, its control over territory has been limited to areas in the Nangarhar province.

With the Taliban at the negotiating table, the current period presents an opportunity for the ISKP to project itself as the standard-bearer of the jihadist cause. Through its violent attacks, it is pitching itself as the only jihadist group that remains committed to the cause, despite the setbacks it has suffered.

It is seeking to attract young, urban Afghans into its ranks and, with several fighters among the Taliban itself opposed to the ongoing talks, they too could be drawn by the ISKP’s violent campaign.

Then there is the issue of financial and other support that the Taliban and other radical Islamists and jihadists receive from their sponsors in Pakistan, Iran and the Arab world. With its high-profile violence, the ISKP will be hoping that these donors will divert their funds from the Taliban into its coffers.

Tensions between the Taliban and Pakistan are said to be increasing. Apparently, Islamabad, which for decades provided generous patronage to the Taliban, resents the latter’s increasing attempts to wriggle free of Pakistan’s grip and assert its autonomy. Such efforts will be sure to gather further momentum as the Taliban moves closer to power in Kabul.

Many in the Afghan and Indian security establishments believe that the ISKP has strong ties with Pakistan’s Inter-Services Intelligence, given the large number of dissident Pakistan Taliban fighters as well as militants from Pakistan-supported groups like Jaish-e-Mohammed and Lashkar-e-Toiba among the ISKP ranks.

With the Taliban distancing itself from Pakistan, will the ISKP emerge as Pakistan’s main sword-arm in Afghanistan?