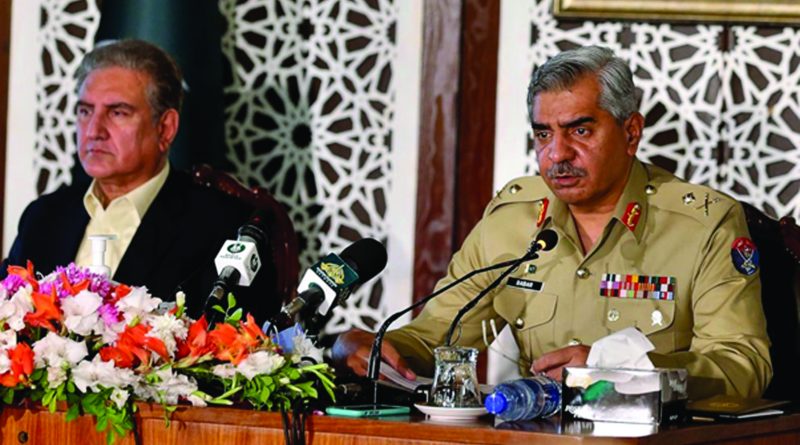 A so-called ‘terror dossier’ compiled by Pakistan on India lacks any supporting evidence and has failed to win credence from the international community. Yvonne Gill reports

Pakistan’s Inter-Services Public Relations (ISPR) director-general Major General Babar Iftikhar and Foreign Minister Shah Mahmood Qureshi held a joint press conference on November 14, supposedly to provide ‘irrefutable proof’ of India’s alleged role in terror incidents in regions ranging from Balochistan to Khyber Pakhtunkhwa, as well as Gilgit-Baltistan in Pakistan-occupied Kashmir. Presenting some sort of a dossier, Qureshi surprised many when he said that the world could not afford to ignore India’s ‘rogue behaviour’.

Having itself come under international pressure to stop harbouring terrorists, Pakistan has often accused India of aiding and abetting terrorism in the past. But this time Islamabad has come up with systematically concocted ‘evidence’ in the form of ‘details’ regarding training, sheltering and weapons supply, supported by copies of purported correspondence, bank transactions and communication intercepts.

‘The evidence presented by Pakistan provides a concrete proof of Indian financial and material sponsorship of multiple terrorist organisations, including UN-designated terrorist organisations Jamaat-ul-Ahrar, Balochistan Liberation Army and Tehreek-i-Taliban Pakistan (TTP),’ explained Qureshi, who is a minister in the Imran Khan government, widely believed to be a puppet regime propped up by the military.

As he accused India of ‘training, harbouring, and launching… terrorists into Pakistan’ from as many as 87 training camps – 66 in Afghanistan and 21 in India – Imran Khan gleefully tweeted: ‘We expect the international community to force India to end its terrorism and bring to justice those responsible for killing thousands of innocent people in Pakistan.’

‘This is yet another futile anti-India propaganda exercise’

While India has time and again exposed Pakistan over the years, giving concrete evidence of weapon seizers and captured or killed terrorists routinely sent into India, this is first time that Pakistan has come out with a ‘dossier’, to be presented to the world as ‘proof’, which even Pakistani opposition leaders have described as unsubstantiated and flimsy.

India summarily dismissed the allegations as ‘fabricated’ and ‘figments of imagination’, with Foreign Ministry spokesperson Anurag Srivastva saying: ‘This desperate attempt will find few takers as the international community is aware of Pakistan’s tactics. This is yet another futile anti-India propaganda exercise. The so-called claims of “proof” against India enjoy no credibility.’

Calling the press conference a ‘deliberate attempt on the part of the Pakistani establishment to shift focus from its internal political and economic failures’, Srivastva asserted that ‘it also seeks to justify cross-border terrorism, including ceasefire violations and infiltration across the LoC and International Borders’.

He added: ‘Despite repeated calls for restraint and adherence to the ceasefire understanding of 2003 for maintaining peace and tranquility, Pakistani forces continue to engage in providing supporting cover fire to infiltrators. The incessant infiltration of terrorists and induction of weapons to fuel terror activities continues unabated. Such activities are not possible without the support of Pakistani forces deployed along the LoC.’

To Pakistan’s claim that Indian RAW agents were involved in abetting terrorism and that the ‘Indian ambassador and consular general [sic] in Jalalabad’ were involved in planning and financial support to TTP and Baloch militants, the Afghan government also gave a strong rebuttal, squarely rejecting the allegation that its territory was being used to train terrorists targeting Pakistan.

‘As a major victim of terrorism, we are committed to a policy of combating all forms of terrorism, without discrimination around the world, and will never allow Afghan territory to be used for destructive activities against other countries,’ the Afghan foreign ministry said.

Globally, Pakistan is known as the ‘pernicious cradle of terrorism’, having unapologetically supported Islamic terrorism, especially against India and Afghanistan. Terror organisations including al-Qaeda, Lashkar-e-Taiba, the Taliban, Haqqani Network and several other outfits freely operated in the country until international pressure began to build up, as a result of which Pakistan has been forced, reluctantly, to curb their activities over the last few years.

One of the main threats Pakistan faces is the United Nations Financial Action Task Force(FATF), a Paris-based inter-governmental body established in 1989 to combat money-laundering and terrorist financing. Pakistan is on FATF’s ‘grey list’, as most countries on the Task Force believe Islamabad has not fulfilled its obligations to control these activities on its soil. A possible shift to being ‘blacklisted’ by the 37-nation group could have serious implications for Pakistan’s already fragile economy, as potential sanctions would not allow the country to seek the financial loans it perpetually needs.

The accusations against India could be a Pakistani ploy to divert attention from its inability to fulfil FATF’s stringent conditions. However, Pakistan lacks the credibility to sell any such wild accusations to the West; it is ‘important’ for the West, not because it fights terrorism like a normal state, but due to its deep linkages with terror outfits, which remain a grave threat to the rest of the world.

Indeed, it isIslamabad’s continued ties with, and patronage of, those groups responsible for major terror attacks, from 9/11 in the US to 26/11 in Mumbai and Paris, which have severely dented its credibility. Western intelligence and security agencies treat groups like the Taliban and al-Qaeda as extended arms of the Pakistani security establishment.

Although the EU and the US have been reluctant to take sides on Kashmir, due to its complex geopolitical factors, there is no denying the connection between Pakistan-sponsored terrorism and social unrest in Kashmir. Western agencies have no doubts about who trains, finances and sends thousands of Lashkar-e-Taiba, Jaish-e-Muhammad and Hizb-ul-Mujahideen fighters across the border into the Indian side of Kashmir.

The world knows how hundreds of thousands of Kalashnikovs, rocket-propelled grenades, M4 Carbines, RDX, IEDs etcetera end up in the Indian side. Where do they come from, if not through the Pakistani Inter Service Intelligence (ISI)?

One of the recurrent themes for Pakistan has been the Kulbhusan Jadhav episode and the Indian ‘conspiracy’ to sabotage the China Pakistan Economic Corridor (CPEC) using Baloch nationalist militant groups. Yet not a shred of credible evidence has ever been provided to support this claim.

The timing of this ‘dossier’ is also interesting. It has come at a time when China is in a face-off with India, which has challenged the dragon’s aggressive moves in Eastern Ladakh. The Chinese are also facing India’s formidable naval challenge as the country is emerging as an important force to contain Beijing’s belligerence in the Indo-Pacific region. Moreover, India has questioned the legitimacy of China’s involvement with CPEC projects that pass through the disputed region of Jammu and Kashmir (Gilgit-Baltistan).

What has been described as a ‘diplomatic offensive’ by Pakistanis also comes at a time when China has assumed the chair of FATF. Pakistan was put on the organisation’s grey list in 2018 for the second time, and remains there despite the Pakistan government amending laws, imposing strict financial sanctions on 88 terrorist outfits and their leaders, including Jamaat-ud-Dawa’s (JuD) head, Hafiz Saeed, and Jaish-e-Mohammed’s (JeM) Masood Azhar. For the first time, the authorities have also imposed sanctions on the Afghan Taliban.

But this ‘dossier’ diplomacy appears to be nothing more than empty rhetoric, too flimsy to be taken seriously by the international community.