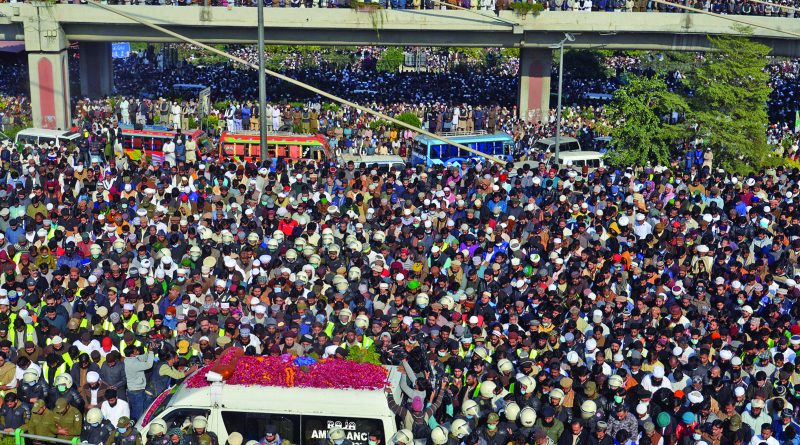 Glint of light in dark days

With both the Covid-19 pandemic and political pressure intensifying, Pakistan’s government is in crisis – though there is some good news. Rahimullah Yusufzai reports

As a second coronavirus wave hit Pakistan, the political confrontation between the government of Prime Minister Imran Khan and the 11-party opposition alliance, the Pakistan Democratic Movement (PDM), also intensified.

The PDM has continued to hold big public meetings aimed at toppling the Pakistan Tehreek-e-Insaf (PTI) government, despite warnings by the prime minister, his aidesand experts that these events are potentially coronavirus super-spreaders. There is concern that the number of people affected by the virus could register a further increase as standard operating procedures (SOPs), including mask-wearing and maintaining a distance of six feet from others, aren’t and cannot be followed in such large gatherings.

The latest PDM public rally on November 22 in Peshawar became a bone of contention as the PTI government banned the event, but the opposition parties insisted on holding it, regardless. In the end, the government realised it could not enforce the ban, though it warned that charges would be filed against the PDM leaders and organisers, should  the number of Covid-19 cases show an increase after the rally. This, too, was clearly unworkable.

Now, the PDM is planning more public rallies in Multan, Rawalpindi and Lahore in Punjab, Pakistan’s most populous province and the stronghold of former Prime Minister Nawaz Sharif’s Pakistan Muslim League-Nawaz (PML-N). It also has plans to stage a public meeting at the Bhuttos’ hometown, Larkana, in Sindh province, where the late Benazir Bhutto’s Pakistan People’s Party (PPP) is in power. The party is now led by her ailing husband Asif Ali Zardari (who is facing a number of court cases on charges of corruption and money-laundering) and their only son, Bilawal Bhutto Zardari.

Having built the momentum against the government and mobilised the people through these public rallies, the PDM has a grand plan to organise a ‘long march’ to the federal capital, Islamabad, in a bid to paralyse the Imran Khan administration and force him to resign. The opposition has been demanding the premier’s resignation and fresh polls, as it is convinced the July 2018 general election was rigged in favour of Imran Khan. It accuses the country’s powerful military of bringing him to power and sustaining him, despite the PTI’s failure to deliver on its promises, particularly with regard to the dire economic situation, price hikes and unemployment.

As well as the PDM rallies, other parties and organisations are also holding meetings, oblivious of the fact that these gatherings could cause the spread of coronavirus. The Tehrik-i-Labbaik Pakistan (TLP), a radical religious party with followers from the Barelvi Sunni sect, staged one of its familiar ‘dharnas’ (protest sit-ins) recently at the Faizabad Bridge linking Islamabad with the twin city of Rawalpindi, as part of its protests against France for allowing and defending caricatures of Holy Prophet Mohammad (Peace Be Upon Him). The huge gathering dispersed after talks with government ministers. A few days later, theTLP’s 54-year-old founder, Khadim Hussain Rizvi, died of natural causes and his mammoth funeral at Lahore apparently broke all records for funerals in the city, due to the surprisingly large number of mourners. Again, no SOPs were followed as the crowd mingled and stayed at the Iqbal Park venue for hours while waiting for Rizvi’s body to be brought there for funeral prayers.

The Covid-19 situation has taken a turn for the worse after the government claimed success in checking the pandemic during the first wave, through a raft of measures: smart or micro lockdowns, which targeted affected localities instead of closing down whole cities and towns; compensation to those most affected by loss of jobs and businesses;a massive awareness campaign; and investment in healthcare facilities to cope with the challenge. Indeed, the government was claiming credit for controlling the pandemic at a time when developed countries were suffering acutely from the disease.

However, the PTI government is now warning that the second wave is more dangerous and, therefore, a complete lockdown could be enforced in the affected areas if the SOPs are violated, despite government concerns that wholescale lockdowns could render more people jobless and further affect small businesses. Educational institutions, re-opened for a short period, were closed again on November 24 until January 10, 2021, and markets are regularly shut when Covid-19 cases are reported, despite protests by traders and shopkeepers.

By November 25, the total number of Covid-19 cases since the first outbreak of the pandemic early this year had reached 379,883, with the death toll at 7,744. The Planning and Development Minister Asad Umar, during a November 24 press conference, warned that the country may face the worst coronavirus situation after two weeks if there was no adherence to preventive measures. He pointed out that previously, the daily death toll from the virus was only six to eight, but it has now risen to 48. The earlier peak in Pakistan’s Covid-19 cases was in June, then the numbers decreased amid government claims that it had effectively tackled the threat.

Amid this depressing situation, one piece of good news for the ruling PTI was its performance in the November 15 election for the Legislative Assembly of Gilgit-Baltistan, a mountainous region with a population of two million, bordering China and originally a part of the disputed Jammu & Kashmir. The party’s candidates won 11 of the 24 general seats and managed to lure seven independently elected legislators to join the PTI, thus gaining a comfortable majority in the assembly. Prime Minister Imran Khan’s promise to make Gilgit-Baltistan a province may have provisionally  fetched the PTI some extra votes, though generally the ruling party at the federal level is able to win elections in Gilgit-Baltistan and Pakistan-administered Azad Jammu & Kashmir (AJK), due to the electorate’s expectations that the central government will be able to provide more funds for their areas and resolve their pressing issues.

The three main opposition parties – the PPP, PML-N and Maulana Fazlur Rahman’s JUI-F – fared poorly in the election and won just three, two and one seat(s) respectively. Although these parties, along with eight others, are part of the PDM, they could not put up joint candidates or make an electoral alliance to rattle the ruling PTI. The differences in PDM ranks made the PTI’s job easier in the Gilgit-Baltistan election and it is feels as though the opposition alliance will have to strive hard to maintain unity in its ranks as it proceeds with its anti-government agitation.

Ousting a government through street protests has not worked in Pakistan in the past and it remains to be seen if this latest agitation by the PDM will succeed. However, getting the people out on the streets against the government two-and-a-half years after it came to power will not be easy, as they will want to know if a fresh election will bring new rulers who will perform any better than the current ones.