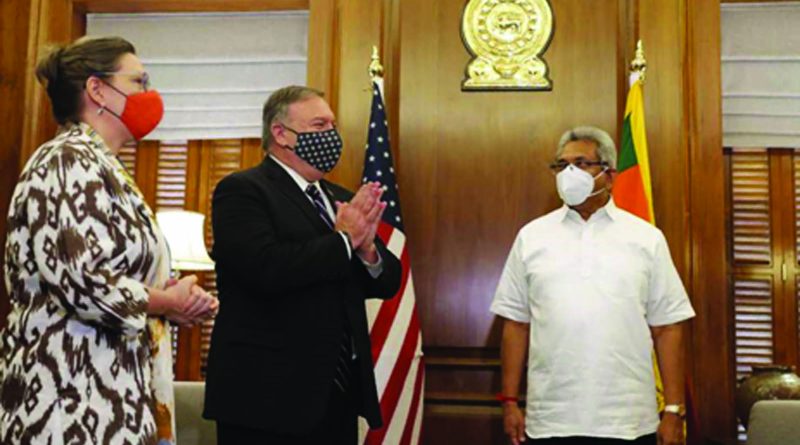 After signing the last of the agreements that tightened military ties with India, US Secretary of State Mike Pompeo stampeded through Colombo in what seemed a deliberate attempt to bulldoze multiple China shops.

Resorting to such abrasive diplomacy is reminiscent of President Trump, who is refusing to relinquish power, claiming he faced a fraudulent election. Trump is using his last few weeks in the White House to bully friend and foe alike into an uncertain and confrontational course with China, which he has been pursuing since early this year.

What might have happened in any imbroglio with China had Trump returned for a second term is difficult to fathom, given his unpredictability and mood swings in dealing with foreign policy. Over the last four years under Trump the US has upset relations with many a friend and longtime ally.

Foreign and security policy in the hands of the capricious and erratic leader of the world’s most powerful military power is dangerous to global and regional peace and stability. There is always the risk that President Trump’s confrontational politics could escalate from a Cold War scenario to a military conflict.

That is why many Indo-Pacific states look forward eagerly to President-elect Joe Biden taking charge of foreign policy – which might well be dominated by Washington-Beijing relations and an agenda to defuse tensions. They, particularly the smaller Indian Ocean states, would feel safer with a more moderate leader in the White House who is likely to establish lines of communications soonest.

Even in the last weeks of his rule Trump is sending Secretary Pompeo, his foreign policy trouble-shooter, to various parts of the globe, whipping up new relations, strengthening old ones or sounding alarm bells among those that are hesitant to accept Washington’s ongoing overtures towards closer relations.

A sign of these last-minute efforts was Pompeo’s stopover in the Sri Lankan capital, which he used to flay Colombo’s closest diplomatic and economic partner, China

‘We see from bad deals, violations of sovereignty and lawlessness on land and sea, that the Chinese Community Party is a predator and the United States comes in a different way,’ he said during the visit, intent on stirring a pot as poisonous as the witches’ broth in Macbeth.

Pompeo reiterated that the US comes as a ‘friend and partner’, in case anyone failed to understand the sincerity of his tone and words. This message went out more than once.

The Chinese embassy in Colombo retaliated swiftly, imitating a perennial Trump habit by tweeting a promotional image of the ‘Aliens vs Predator’ video game.

‘Sorry Mr Secretary Pompeo, we’re busy promoting China-Sri Lanka friendship and cooperation, and not interested in your Alien vs Predator game invitation,’ retorted the Chinese embassy, coming to Sri Lanka’s defence. ‘The US can play two roles at the same time as always.’

Secretary Pompeo was correct in stating that the United States had come ‘in a different way’. If it intended to win friends and influence the one-year-old Sri Lanka government of President Gotabaya Rajapaksa (who relinquished his US citizenship to contest the presidency a year back), and his brother Mahinda (twice president and now prime minister), this was not the way to do it. In fact, Pompeo caused embarrassment to his Sri Lankan host by engaging in a diplomatic dogfight with a third country on the soil of the host nation.

There are three specific issues on which Washington has been trying to negotiate with Sri Lanka over the years. Two of them are the Acquisition and Cross Servicing Agreement (ACSA) and Status of Forces Agreement (SOFA), both of which are military-related pacts that Sri Lanka had signed in earlier years, and the third, the more recent Millennium Challenge Compact (MCC), which seems dead in the water.

The ACSA was first signed in 2007 by Gotabaya Rajapaksa as Defence Secretary during his brother Mahinda’s presidency  and updated into a more comprehensive pact in 2017 under the Maithripala Sirisena-Ranil Wickremesinghe coalition and SOFA in 1995.

When Washington and Colombo were engaged in secret renegotiations, a leaked document caused a nationwide uproar, damning SOFA as compromising Sri Lanka’s sovereignty and permitting foreign military boots on the ground. The Defence Ministry objected strongly to being left out of the negotiations.

Secretary Pompeo was due in Colombo in 2019 to finalise and sign the agreement but the ensuing island-wide opposition led to Pompeo calling off the visit. At the time SOFA was originally signed, Sri Lanka’s strategic location in the Indian Ocean was not a central issue, as China was not making a concerted push into the Indian Ocean and western powers and India were not overly concerned at Chinese presence in the western Indian Ocean. And Beijing’s Belt and Road Initiative, which would expand Chinese interests to the Arabian/Persian Gulf and beyond to Europe, had not yet surfaced.

Sri Lanka’s key role in China’s westward manoeuvres in the Indian Ocean, especially the crucial China-built Hambantota port in Sri Lanka’s extreme south, less than 20 nautical miles from the important international sea-lanes, worries many big powers and trading nations as this port is now on a 99-year lease to a Chinese state-owned company.

Many are concerned about China’s growing footprint in Sri Lanka, where numerous infrastructure projects and the large Colombo Port City, built from reclaimed land, have mostly been constructed with Chinese loans and financial assistance.

Hence the ‘predator’ accusation made by Pompeo and others that Colombo’s over-reliance on Chinese financial assistance has drawn it into a ‘debt trap’. Yet during talks with Secretary Pompeo, President Rajapaksa dismissed this charge, as did senior officials.

At every possible opportunity Colombo now asserts that its foreign policy will be one of ‘neutrality and non-alignment’. Sri Lanka finds itself in a real bind. It is sitting on strategic real estate that most would like to get their hands on, especially the Hambantota port, which major powers and trading nations fear might someday be used for a dual purpose in times of armed conflict or a Cold War.

To add to its concerns, the increasing naval activity in the Indian Ocean and the military confrontations between India and China, with troops eyeball-to-eyeball in the Eastern Himalayas, has brought two nuclear powers so much closer to Sri Lanka.

As long as India was a founder-nation of the non-aligned movement, the island state had some diplomatic and political cover from predator countries. But in recent years India has abandoned its non-aligned stance and embraced Washington completely with its 2+2 Ministerial Dialogue meetings and signing the foundational documents with Pompeo, making the recent four-nation alliance ‘Quad’ consisting of Australia, India, Japan and the US complete

And there is one more development that should worry Sri Lanka and the country’s Indian Ocean analysts, conscious of what could happen in the next month or so. There is talk in Washington and other major capitals of the US navy planning to raise another fleet that may ultimately be based in Singapore, bringing it much closer to Sri Lanka.

It would be the First Fleet and would operate mainly where Pacific waters meet the Indian Ocean. This could well be part of the ‘New NATO’ that is being mentioned, and which Trump is expected to sanction by Executive Order before he quits.

From Sri Lanka’s standpoint, however much Washington and others try to wean the country away from China, it will be near impossible. China has been a longtime diplomatic and economic friend of Sri Lanka. That relationship dates back to the early 1950s, a year or two before the two countries signed the famous rubber-rice pact during the Korean War, when Sri Lanka (then Ceylon) bartered its rubber for rice – an agreement that continued for some 25 years. It earned the ire of the US, which threatened to impose sanctions on Ceylon for selling war materials to an enemy – China.

Sri Lanka withstood American threats then. Now it will have to tread even more carefully than angels. China might be an all-weather friend, but it cannot provide military cover against enemies, especially those with technological capabilities that can kill one from kitchens tens of thousands of miles away

Yet Sri Lanka cannot untie itself from China’s apron strings. That is Colombo’s dilemma.