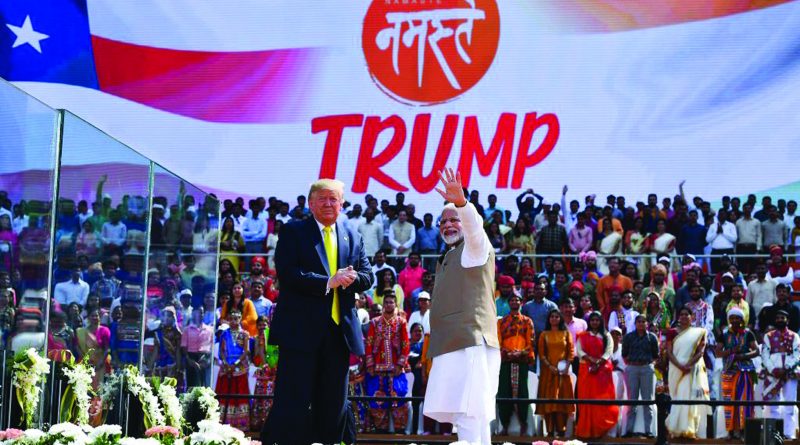 Not such great expectations

As India looks to the new Biden administration to strike a balance between strategic value and trade, it cannot bank on a US volte-face on trade policy, warns Jayanta Roy Chowdhury

In late February this year, as the world was starting its war against the Covid-19 pandemic, President Donald Trump paid awhirlwind two-day visit to India. The first day saw tens of thousands lining the streets to greet him on his way from Ahmedabad airport to Motera Cricket Stadium in Gujarat, Indian Prime Minister Narendra Modi’s home state. A cheering crowd of 125,000 gave the two leaders a standing ovation at an event billed as ‘Namaste Trump’, or ‘Howdy Trump’.

A few months earlier, in September 2019 at Houston, Texas, Modi and Trump had addressed a smaller but equally enthusiastic crowd of Indians settled in the US. In a surprise, perhaps partisan turn, the Indian Prime Minister had pitched in to help his ‘friend’ by coining the slogan ‘Ab ki Baar, Trump Sarkaar’, loosely translated as ‘This time, a Trump government’, and a mirror of Modi’s own campaign slogan from 2014.

Many experienced diplomats were shocked. Never before had an Indian politician devised campaign slogans for an American leader, or vice-versa. However, there were as many who brushed that indelicate fact away to describe Modi’s chemistry with Trump as a ‘new bromance’.

Ultimately, the ‘bromance’ yielded little for India. The Americans continued to play hardball on the trade and immigration front. In hectic parleys just ahead of the Presidential elections, Trump’s team sat with Indian negotiators to try and bully them into agreeing to a wide range of trade concessions.

American demands included lowering tariffs on a range of farm products, automobiles (including the iconic Harley Davidson motorcycle), telecom gear and new age energy technology products, in exchange for restoring duty-free exports of select Indian merchandise under the Generalised System of Preferences (GSP) that the US had allowed India till last year.

The Trump administration also slapped high punitive duties on Indian exports and sought to replace the H-1B visa, which allows Indian software giants to body-shop computer programmers to the US, with a new, more difficult system, as part of pressure tactics to prise open Indian markets. To add insult to injury, President Trump famously called India ‘King of Tariffs’, even as he called Modi his ‘good friend.”

With the Modi-Trump chemistry not yielding much that could comfort Indians in a difficult year, other than joint naval manoeuvres in the Indian Ocean and a deal to share satellite images, telephone intercepts and data, India is fast glossing over the now irrelevant ‘bromance’ and working back channels to network with the incoming Biden administration.

On November 8 – a day after Joe Biden clinched Pennsylvania and enough electoral votes to secure final victory– Modi’s office tweeted images of the two embracing each other way back in 2014 and 2016.

About ten days later, the two leaders had their first phone call. India’s television channels started calling the budding relationship the ‘start of a new era of meaningful friendship’ and editorials forecast trade deal bonanzas for India, including India joining the Trans-Pacific Partnership under US leadership.

Biden, like his predecessors Barack Obama and Donald Trump, wants to contain the rise of China and will feel the need for India, the only significant military power in Asia besides the Middle Kingdom. However, that said, it is unlikely his administration will undo all the punitive trade measures that Trump’s team inflicted on India.

Policy analysts say that, while Biden’s team will certainly not go along with the unpredictable and often whimsical trade warfare of the recent past (the Trump administration’s ‘America First’ policy not only imposed punitive tariffs on Chinese produce but also exports from friends including India and the EU, riling both), it is unlikely to do a U-turn on trade policies. Spats are expected to die out, but the crux of the issue – protecting American business while gaining new markets for it – will remain the mainstay of the new administration’s policy playbook.

‘Our assessment is that the US will continue to pressure India to open markets to American business. The Democrats have also been known to be more protectionist in their economic stance than the Republicans, so to expect any bonanza in making it easy for our exports or services trade would again be wishful thinking,’ pointed out Ambassador Pinak R Chakravarty, former Secretary (Economic Relations), Ministry of External Affairs.

American economic diplomats have been chiselling away at India’s trade and tariff barriers in a bid to open up the Asian giant’s lucrative retail and financial markets from Bill Clinton’s presidency. It is unlikely that the American State and Commerce departments will give up those aims during Biden’s tenure.

Rules which affect US retail giants such as Walmart, Amazon or tech transnationals like Google, who want to enter India’s financial sector, will continue to be vigorously taken up by the new administration.

Biden, analysts point out, will have two major issues weighing on his mind as he takes over the US Presidency: tackling the US health emergency and solving the economic crisis at home, which saw the poorer middle states of America voting mostly for Trump, even as the east and west coast states swung for Biden.

The problem for countries like India, which have been targeted in the past by US trade action, is that domestic American politics always have international ramifications. To help create jobs in the American ‘rust belt’ and protect farm incomes in middle America, Biden’s administration may well push for both protectionist measures and steps to increase US exports abroad.

‘Democrats have been known in the past to be more protectionist than the Republicans and concessions to India on trade will come after much hard bargaining,’ warned Biswajit Dhar, Professor at the prestigious Jawaharlal Nehru University, and specialist in international trade.

The only saving grace for Indian negotiators will be Biden’s desire to continue with the policy of balancing China. As the US continues to reach out to New Delhi on the strategic front to take on Beijing, analysts believe there could be scope for trade-offs between strategic and trade deals that India signs on.

However, while balancing China is a long term goal for the Biden administration, getting favourable trade deals with the West has become an immediate priority for India. Fearing an on-rush of cheap Chinese products flooding its market and bankrupting its own industry, India had decided last year against joining the Regional Comprehensive Economic Partnership (RCEP), the mega-trade pact, concluded between China, the 10 ASEAN nations, Australia, New Zealand, Japan and South Korea.

The problem with not signing on to the pact, however, is that much of the global supply chains India desperately wants to attract to its shores, in a bid to ratchet up its exports and reverse the Covid-induced recession in its economy, will now be controlled by RCEP.

The rules RCEP has brought in allows trade in components produced by any member country to be treated equally by others. Global credit issuance giant Euler Hermes says this will increase merchandise exports within RCEP by nearly $90 billion a year, a sure shot recipe for post-Covid supply chains which are currently dominated by China to stay within the region.

The pointers are already there: American, European and Japanese transnationals which wanted to move out of China in the wake of the Covid shock to their global supply chains have mostly chosen to shift base to countries like Vietnam, Malaysia and Korea.

India desperately needs to sign trade pacts with the European Union and the US, its two big markets, and possibly join a mega trade pact like the TPP to offset trade losses from not joining RCEP and to boost exports which were declining even before the pandemic started. Manufacturing as a percentage of India’s GDP has already fallen from 17.30 per cent in 2006 during Dr Manmohan Singh’s premiership to 13.72 per cent last year, despite the Modi administration trying to woo industry with a sheaf of incentives and sops.

However, to sign the big trade deals it wants with the West and possibly beak into the TPP trading bloc, India will need to lower its tariffs and open up markets more. This is where the trade-off between its strategic value as a partner to countries who fear the dominance of China in the world order and its ability to get trade concessions will come into play – an ability which will depend much on how the Biden administration is willing to do business with India and the rest of the world.