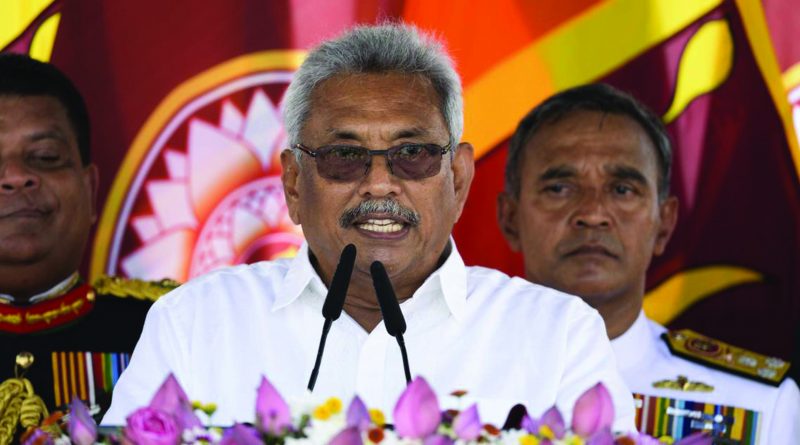 Sri Lankans are a fun-loving people. Whatever their ethnicity and religion, the New Year is celebrated with fire crackers and native food, however little they can put on the table.

Not this year. If 2020 haunted the more than 21 million people with the sudden outbreak of the dangerous Covid-19 pandemic that raged across the country from early in the year, 2021 will dawn with even more fear and trepidation.

While authorities were still battling the earlier virus strain, the year ended with scientists trying to determine whether another strain is circulating, with recent mutations that result in it seven more rapid spread and other infectious features.

All this is happening at the height of Sri Lanka’s usual tourism season. The hospitality and travel industries have been battered by the pandemic, with closed airports, job losses and hotels struggling to survive. One of the main stays of the economy is beginning the new year on its knees.

This may cause sleepless nights for President Gotabaya Rajapaksa, a younger brother of former president Mahinda Rajapaksa, who shot to central power on the back of dramatic events during the quarrel some coalition of President Maithripala Sirisena and Prime Minister Ranil Wickremesinghe.

On Easter Sunday 2019 Islamic jihadist suicide bombers attacked three luxury hotels in Colombo and four churches in the capital and other popular tourist destinations, killing 270 locals and tourists and wounding 500.

A country already contending with intra-government strife between the two coalition partners and a debt-burdened economy was now confounded by what seemed like the return of terrorism – this time jihadist violence on top of the minority Tamil separatist war by the LTTE, which was eventually crushed militarily after nearly 30 years.

Sri Lanka’s killing fields,with at least 100,000 dead on both sides,ended over ten years ago. But the tragedies and fears of war left deep and indelible scars in the Sri Lankan psyche.The majority Buddhist nation was shaken to its roots.

The Easter Sunday atrocity, involving the country’s second biggest minority, drove Sri Lankans to circle their wagons. They had trusted their government to push back the Mahinda Rajapaksa administration and restore the country’s waning democracy,but were now increasingly disgusted and angered,and baying for the blood of yet another government that had failed them.

Such was the mood of the nation that the demand was for a powerful leader and a strong government. One influential Buddhist monk even mentioned Hitlerite-style rule backed by the military,which sounded like a clarion call for an authoritarian presidency.

Enter Gotabaya Rajapaksa, war veteran and younger brother of ousted President Mahinda. A migrant in the US,he returned in 2006 to work as defence secretary, in tandem with his brother.

With the then Sirisena-Wickremesinghe leadership at logger heads, the economy in near tattersand all thistopped by a new terrorism, Gotabaya – pushed by the Rajapaksa family, retired and serving military colleagues and business cohorts – announced his candidacy for president within six days of the Easter Sunday bombings.

In keeping with the public mood and his own private personality, Gotabaya pledged a platform of national security and law and order. That was understandable, given that public blame had fallen on the Sirisena government for failing to act on intelligence passed on by Indian security agencies of an impending jihadist attack.

Gotabaya also promised to repeal a constitutional amendmentmade by the Sirisena government at the beginning of its term which stripped the president of several powers, passing them on to parliament, and brought in changes obviously intended to block the Rajapaksa family from a return to power, at least for some years.

With Gotabaya winning the presidential election before the parliamentary polls, he made the error of filling senior and specialist civilian posts with retired and serving military officers.

Shortly after assuming office, he appointed a Task Forceto ‘Build a Secure Country, Disciplined, Virtuous and Lawful Society’. His Task Forcewas composed entirely of military and police officers who had the power to issue instructions to any government official, according to media reports.

While senior civilian officials were being replaced by men in uniform, senior and highly qualified doctors and scientists were eliminated from the Covid-19 task force headed by the army commander.

One of Sri Lanka’s senior-most virologists and bacteriologists, Dr Tissa Vitharana, was not co-opted into the task force, nor was he even consulted, leaving foreign and local experts baffled. All this while the country’s so-called experts were groping in the dark as the competent and experienced looked on bemused.

Meanwhile, Sri Lankans were whispering about the fading popularity of the Gotabaya administration, which had been held in national esteem in the early post-election months.

Critics of the government’s 2021 budget demanded to know how a government confronted with troubling national health issues like coronavirus and a lack of sufficient medical facilities and medicines to treat a struggling population could allocate the largest share of funds to defence,as though Sri Lanka was still at war.

Economists were asking which pundit proposed the next highest allocation go to highways, which was granted twice the amountgiven to health at a time when the government’s wunder kinder are still trying to control the early corona outbreak.

As the early dreams of a hopeful people backed by ethno-nationalists begin to fade, analysts believe that President Rajapaksa and his phalanx of supporters of various hues will try to strengthen their hold on power as the drafting of a new constitution begins this year.

The repealing of the 19th amendment to the 1978 constitution, the restoration of the lost presidential powers and adding still more, turning parliament into a puppet, are signs of what lies ahead for a population that is feeling betrayed.

Some even fear that human rights such as freedom of expression and media freedom may also run into new diktats. And if the Gotabaya government was hopeful that Washington under Joe Bidenwould be more sympathetic to Sri Lanka than the Trump administration, which decried Colombo’s pro-Beijing dalliance, March might prove a testing time.

In March the UN Human Rights Council (UNHRC) will resume discussions on UN Resolution 30/1 and others that condemned Sri Lanka and called for international investigations and accountability trials for alleged war crimes by Sri Lanka and the LTTE. The US has already banned some military officers from entering thecountry.

When President Trump pulled out of the UNHRC, condemning the body as worthless, Sri Lanka hoped that without the US spearheading the anti-Sri Lanka resolution, western interest in it would slowly fade as other bilateral and multilateral issues occupied western concerns and those of other democratic nations.

Yet this might appear prematurely optimistic. President-elect Biden has signalled he will place human rights at the ‘core of US foreign policy’. That might well be President Gotabaya’s first foreign policy hurdle, particularly now that Washington has withdrawn its Millennium Corporation Compact (MMC) offer to Sri Lanka. It might cause President Gotabaya to lean even more on China, dragging Sri Lanka further into the Indian Ocean mire.