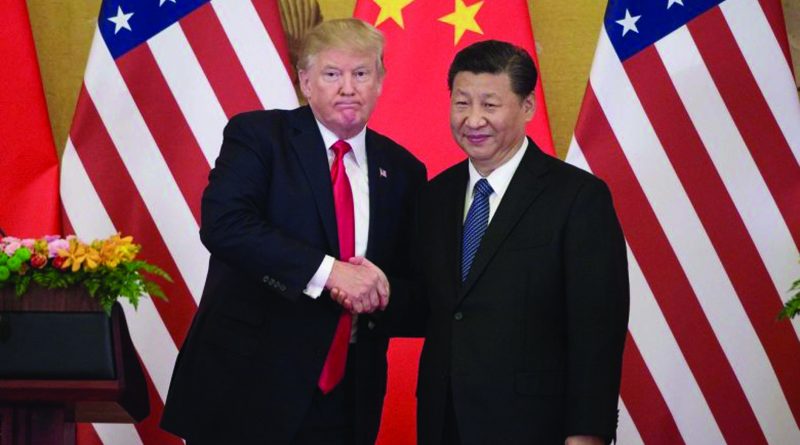 Bulls in a China shop

Dictators and autocrats cause more harm than good. US president Donald J. Trump and Chinese President Xi Jinping are classic modern-day examples of this and make for an interesting comparison.

Over the last decade or so, China’s technological and economic growth has been unprecedented and its economic cooperation and trade with countries across the globe, phenomenal. Yet with Xi accumulating more and more power within the Chinese Communist Party (CCP), China’spolicy stance, particularly towards the West, has been steadily hardening, bordering almost on militarism. This has been particularly apparent since the coronavirus pandemic, which originated in China, and in 2020 spread throughout the world, causing a crisis unparalleled in the history of mankind.

During his four-year presidency, Xi had a unique opportunity to significantly, and perhaps permanently, expand China’s influence around the world – largely at America’s expense asTrumpangered friends and foes alike. The US president recklessly withdrew from global institutions and agreements,such as the WHO and Paris Climate Agreement, and failed miserably to tackle the coronavirus pandemic – foolishly mocking the wearing of masks and other infection-mitigating measures, even becoming infected himself and turning the White House into a COVID-19 hotspot.

Meanwhile, the trade war against China was orchestrated globally as Trump ordered US allies to ban Chinese companies, as well as joining the military standoff in the South China, East China and Indo-Pacific seas.

Moreover, the raging pandemic and his racist election campaign not only polarised American voters but had global implications, with the US’s image taking a battering and even allies beginning to view the world’s only superpower with suspicion.

Although Trump’s ill-considered actions and policies have acted as a red rag to a bull, Xi’s China, as a superpower-in-waiting, has woefully failed to capitalise on these opportunities. With his band of wolf-warrior diplomats and a fanatical communist bureaucracy, the Chinese supremo has indeed proved himself to be the raging bull in the china shop of international geopolitics.

Time and again, China has only created problems for itself as it tries to take on one country after another, all the while unleashing a campaign of persecution and suppression against minorities and dissidents at home.

In 2020, relations between China and the West plummeted to an all-time low. China was blamed for hiding the truth about the coronavirus outbreak; its trade policies were deemed unethical; there were intellectual property violations and human rights abuses targeting the Uighur Muslim minority in Xinjiang province and conflict with Tibet, over Taiwan, Hong Kong and the South China Sea. Indeed, Trump’s doctrine has only served to make Xi more belligerent and aggressive towards the US and other countries too.

As Xi opened China’s border with its important trading partner, India, the military standoff launched on the China-India Ladakh border resulted in bloody clashes and casualties – the first since 1967. India retaliated militarily and by banning popular apps, such as TikTok, as well as other Chinese products and services.

At the same time, the national security law, imposed by Beijing on Hong Kong in 2020 to crush the city’s pro-democracy movement, was denounced by the UK as violating the earlier treaty the two countries had signed, to protect the former British colony’s democratic system of government.

China has also been embroiled in bitter disputes with Canada and Australia, blocking imports and even taking Canadian nationals in China as hostages in retaliation for the arrest of a Huawei executive, at Washington’s behest, on charges of fraud.

Beijing’saggression is not just alienating China but has resulted in countries from different continents,who perceive China as a growing threat, cooperating more closely. For instance, an informal partnership known as ‘the Quad’, comprising Australia, India, Japan, and the United States, has emerged as a formal anti-China bloc in the Indo-Pacific.

Meanwhile, a recent Pew Research Center’s global survey revealed that attitudes toward China have deteriorated steeply in a number of countries, falling to anall-time low in countries such as Canada, Germany, South Korea, Spain, Sweden and the United Kingdom. Though Xi’s image, according to the survey, is somewhat better than Trump’s,78 per cent of respondents said they had little or no confidence that Xi would do the right thing in global affairs – a sharp shift from 61 per cent in 2019. In almost all of the 14 countries surveyed, negative opinion of Xi reached the highest levels this year.

Bonnie Glaser, director of the CSIS China Power Project, believes, however, that China’s international standing is low on Xi’s list of priorities. ‘He cares far more about his reputation and support domestically,’ she says.‘He’s seeking to consolidate the party, national unity, using the criticism from abroad to actually forge that greater national unity at home.I think that Xi Jinping is willing to pay a price in the international community, as long as he can have the support that he needs.’

Another expert, Jude Blanchette, Freeman Chair in China studies at the Washington-based Centre for Strategic and International Studies, maintains that ‘the overwhelming shift in global opinion on China is such that even the most insular leader couldn’t fail but recognise that there is a galvanising opinion against the country.This is happening not in one specific area in China, but this is happening because of Xinjiang, increasingly over the past few weeks, Tibet, we’ve got Taiwan, we’ve Hong Kong, wolf warrior diplomacy. This is a multi-pronged set of grievances against China so I suspect the Xi administration knows that.

‘I think the more profound and concerning implication of this, though, is they don’t care. They are going to play their game. They’re going to play it strongly,’ Blanchette points out.

While US President-elect Joe Biden has yet to announce his China policy, Japan and Australia, pushed by US Secretary of State Mike Pompeo, are looking forward to closer defence cooperation with Washington in the Pacific region. Similarly, Taiwan also expects that it will continue to enjoy the all-out support it got from the Trump administration, as is India, which considers containment of China a must to ensuring peace and stability in the region.

Blanchette warns, however, that Beijing feels it is in the ascendancy as the US struggles with the smooth transition of power from one administration to the next. ‘I suspect when they look out at the balance of power and look at the US political system and where the US has been in responding to coronavirus, this probably confirms their existing view that the United States is a declining power with deteriorating democratic institutions, and China’s on the rise.’

Meanwhile, China, for its part, has embarked on an aggressive vaccine for the developing countries, diplomacy and expansion of its trade cooperation and the Belt & Road Initiative – a multi-billion infrastructure investment plan spread across Asia, Africa and Latin America.

Additionally, in November, China signed the Regional Comprehensive Economic Partnership (RECP) with 14 countries, including Japan and Australia. The pact, which does not include the UK, US or India, is one of the biggest free trade deals in history, covering more than two billion people and 30 per cent of the world’s economic output. The RECP, which is a significant step towards removing trade barriers, fills the void left by Trump when he arbitrarily withdrew the US from the Trans-Pacific Partnership – an agreement that could have restricted China’s influence by strengthening America’s economic presence in Asia.

The moot point is what is Biden’s China policy going to be? And will Xi start to show greater cooperation?

Chinese Foreign Minister Wang Yirecently stated that the two countries should resume dialogue to restore ties. Speaking during a video conference with the board of the US-China Business Council (USCBC), Wang stressed that both countries should increase dialogue at all levels and expand areas of cooperation – such as getting the coronavirus pandemic under control.

Wang blamed the ‘outdated Cold War mentality and ideological prejudices’ of some in the US government as a key reason for the deteriorating relations and decried the perception of China as an opponent or enemy.

‘Engaging in comprehensive containment against China, and even advocating for “decoupling” and a “new Cold War”, this is making a historical, directional and strategic error,’ he said. ‘We expect and believe that the US’s China policy will return to objectivity and rationality sooner or later.’

Tellingly, former US Secretary of State, Henry Kissinger, who was a prominent architect of America’s foreign policy during the Cold War, feels that Biden has a very serious challenge ahead in restoring ties with China.

Speaking on Bloomberg’s New Economy Forum, he said: ‘Unless there is some basis for some cooperative action, the world will slide into a catastrophe comparable to World War I. America and China are now drifting increasingly toward confrontation and they’re conducting their diplomacy in a confrontational way.  The danger is that some crisis will occur that will go beyond rhetoric into actual military conflict.’

It can only be hoped that China’s leadership will see reason and climb down from its policy of aggression and confrontation and move towards making the world a better place in which to live and prosper, post-2020.