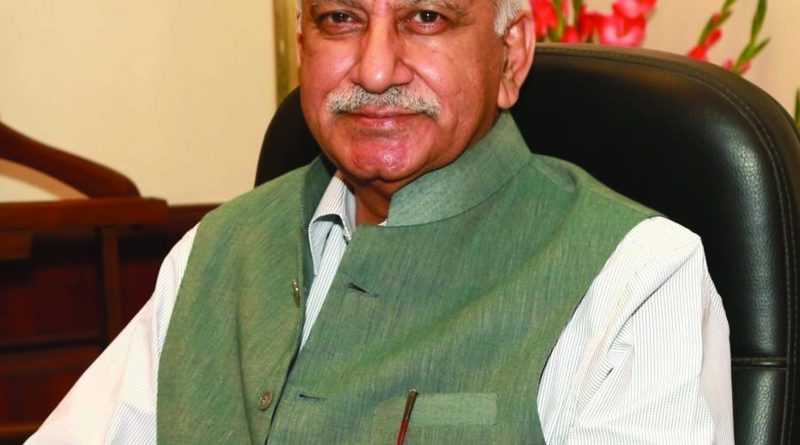 At a recent webinar to mark the centenary of Aligarh Muslim University, M.J. Akbar called for Indian Muslims to embrace education and their own significant role within a modern, pluralistic India

India’s Former Union Minister M.J. Akbar has urged Indian Muslims to play an active role in the nation-building process, as they have been doing for the past several decades.

‘The dangers that we Indian Muslims face, and I think one of the most important ones, is the temptation to behave like victims. We are not victims. We have been given a historic opportunity by democratic constitution, secular constitution and we have the opportunity to actually become leaders of change across the world,’ said Akbar, who was the chief guest at Aligarh Muslim University’s Centenary International Webinar.

The webinar, titled ‘The establishment of AMU and its achievements, 1920-2020’, was presided over by Professor Tariq Mansoor, Vice Chancellor of the university, and other speakers included Professor David Lelyveld from William Paterson University in the US, and Professor Ali Mohammad Naqvi, Director of Sir Syed Academy.

‘I would suggest that we do some serious thinking about the terms we use so easily, terms which have become a part of our narrative without us fully understanding what those terms mean,’ said Akbar. ‘We must use this opportunity to be candid. We must think: what is the meaning of minority? The way Indian Muslims were a minority when, say, the Mughals were in power. They were not. Demographically, yes. But not in the way we understand the term today. Which brings us to the conclusion that minority and majority are not a function of numbers but a function of empowerment. If we feel empowered we don’t think of ourselves as a minority.

‘We live in a nation where every morning begins with Azaan. I often tell visitors in Delhi that if they want to understand India, they must go to old Delhi in the morning where they will first hear the Azaan, followed by the Hanuman temple bells, followed by the Granth Sahib recitation from the Gurudwara and followed by church bells on Sundays. That really is our country. We are an essential part of the country’s past, a formidable part of its present and a vital part of our country’s future. This is the best way we can commemorate and celebrate the centenary year of Aligarh Muslim University.’

The former union minister also commented on fellow speaker Professor Ali Mohammad Naqvi’s remarks that there were two Taj Mahals, one in Agra and the other in Aligarh.

Gen. Hussein Muhammad Ershad imposed Islam on the country as the state religion

Even so, it is not easy to ignore the various attempts that have been made to undermine the secular spirit of the country. Following the violent overthrow of the government of Sheikh Mujibur Rahman in 1975, successive military and quasi-military regimes in Bangladesh have bent over backwards to taint national politics with the brush of communalism. The nation’s first military ruler, General Ziaur Rahman, removed secularism from the constitution through dictatorial fiat. The second military ruler, General Hussein Muhammad Ershad, imposed Islam on the country as the state religion. The legacy of these two men has somehow remained, even if in a rather diluted form. Constitutionally, Islam remains the state religion and the current secular administration appears to be in no hurry to roll things back to where they were pre-August 1975.

While one ought to acknowledge that, despite such encumbrances in national politics, society and culture in Bangladesh remain secular in form and substance, this should not lead to complacency. Extremist religious bodies like the Hefazat-e-Islam, notorious for creating mayhem on the streets of Dhaka seven years ago, have not stepped back from their blatantly anti-secular and misogynistic programmes. Of course, the Hefazat and the current government at one point arrived at an understanding of sorts, but as recent developments have shown, the ruling circles remain wary of such elements. There are, too, outfits such as the Khelafat Majlis which have not only railed against sculptures and statues but have openly voiced a demand for Bangladesh to be turned into an Islamic state.

‘May I just make one point which I think I would like to stress,’ said Akbar. ‘The Taj is a grave. Aligarh (AMU) is a very living institution. And Aligarh represents the life of the present and, in Sir Syed’s conception, that it is the life of the future. We are also in the centenary. For me, 1920 is an extremely important year because I believe that it was in the 1920s that the long 19th century finally ended. And it ended because of a very significant change brought [about] largely by Gandhiji.’

Akbar suggested that AMU should have another word added to its name, making it ‘Aligarh Modern Muslim University’, as ‘modern actually captures the essence of Sir Syed’s whole concept. He wanted to lift the community out of the fog of nostalgia and bring it to terms with the emerging world that was being created out of colonialism. His education was of the past, he studied mathematics, classical music, painting, archery, medicine, but his curriculum was for the future, encapsulated in the scientific society, which he conceived in his approach to technology.’

Akbar also congratulated the present VC for AMU’s brilliant rankings and the part it is playing in contemporary research, including vaccine development for the Covid-19 pandemic. He stressed the importance of education by giving another example from the past.

‘Sir Syed faced many battles. Some of his battles took on angular characteristics. Some conservatives accused him of trying to change Islam, which was an absurdity. An eternal truth cannot be changed. What he was trying to change was to change the Muslims, he was trying to change communities, both Hindus and Muslims through the most important instrument of change – education. If he had a message for the west, it was do not blame Islam for the sins of Muslims. And if he had a message for Muslims, it was to not blame others for your own sins. Sir Syed extended the concept of brotherhood to all communities. He said that the colour of Muslim and Hindu blood is the same, we both breathe the same air, we both drink the water of the holy Ganga and we’ve shared the same customs.’

M.J. Akbar is a veteran Indian journalist, author and politician