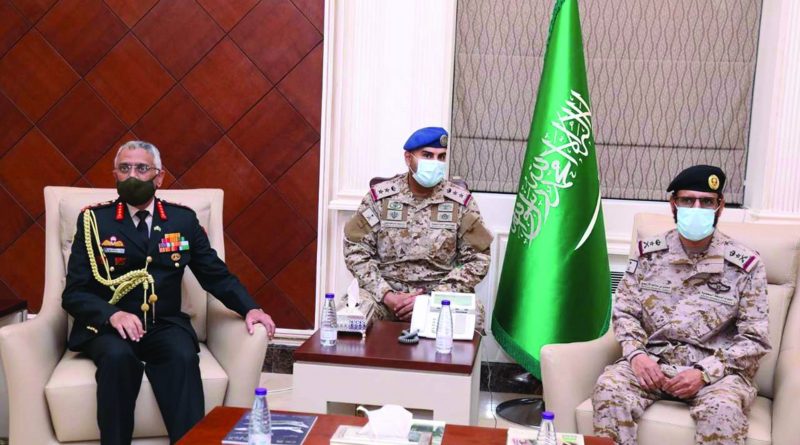 Gains in the Gulf

India’s military top brass has been wooing nations that are geopolitically sensitive but valuable – a move that has rattled both Pakistan and China. Richard Gregson  reports

A slew of foreign visits by Indian army chief General MM Naravane to Myanmar and Nepal in October/November, and now to the United Arab Emirates (UAE) and Saudi Arabia, signals New Delhi’s diplomatic offensive in regions that are geopolitically sensitive for India. Not surprisingly, this is drawing sharp reactions from Pakistan and its big brother ally, China. While the Pakistani media is abuzz with talk of Muslim ‘brother’ countries like Saudi Arabia and the UAE betraying Pakistan, the Chinese official media is also making noises that the visits were a ‘PR ploy’ and of little substance.

Blaming India for ‘spreading rumours’ about China-Myanmar relations, the Chinese mouthpiece Global Times wrote that India ‘has also hyped up normal activities between China and South Asian countries’ and ‘accused China of arming India’s neighbours’, building villages in the ‘tri-junction between India, Bhutan and China’, and even ‘invading’ Nepal. Interestingly, all that is coming from the horse’s mouth because India is genuinely concerned about Chinese intrigues and duplicity which have snowballed over the years into a deadly conflict and face-off on the Ladakh border.

In November, the Indian army chief went to Nepal on a three-day visit which was well-received in Kathmandu. India and Nepal have close defence, economic and people-to-people relations. Meanwhile, China too has been wooing the KP Sharma Oli government to promote its anti-India agenda.

Myanmar is geographically important for China’s ambitious Belt & Road Initiative (BRI), located as it is at the junction of South and Southeast Asia, and between the Indian Ocean and southwestern China’s Yunnan province. Myanmar became a BRI partner in September 2018. The BRI’s 1,700-km China-Myanmar Economic Corridor (CMEC) will connect Kunming, the capital of China’s Yunnan Province, to Mandalay, Yangon in Myanmar. The CMEC will terminate at Kyaukphyu Special Economic Zone (SEZ) and deep-sea port on the Bay of Bengal, giving China direct access to the Indian Ocean. India, therefore, wants to increase its economic and strategic footprint in Myanmar, which has seen protests against Chinese projects that are uprooting the local population and destroying the coastal ecology.

India has traditionally had close economic ties with Gulf nations

On the latest leg, General Naravane visited the UAE from December 9 to 10 and Saudi Arabia from December 13 to14. In the UAE, the Indian Army chief was given a guard of honour at the headquarters of the Emirate’s land forces. He discussed issues of bilateral defence cooperation with Major General Saleh Mohammed Saleh Al Ameri and other officials.

In Riyadh, General Naravane met top Saudi Generals, including military staff chief General Fayyad bin Hamid Ruwaili and Commander of the Joint Forces Lieutenant General Mutlaq bin Salim bin Al-Azima. The army chief also paid a visit to the National Defence University where he addressed students and faculty members.This is the first time an Indian Army chief has been on an official visit to the UAE and Saudi Arabia.

While much ado is being made by the Pakistani media, the fact is that India has traditionally had close economic ties with Gulf nations. Saudi Arabia is India’s fourth-largest trading partner after China, the United States and Japan. Around 8.5 million Indian workers are employed in different countries of the region, with over 2.7 million living in Saudi Arabia. Indian expatriates comprise almost 30 per cent of the UAE’s population.

The UAE and Saudi Arabia are jointly investing $42billion in a petrochemical plant in the Indian state of Maharashtra. More investments from the Gulf countries are in the pipeline.

Over the last few years, the Indian government has also focused on greater security and defence cooperation with Gulf nations. India and Saudi Arabia already have a Joint Committee on Defence Cooperation (JCDC) and delegation-level exchange programme between the armed forces of the two countries. The two sides have also begun joint exercises between different branches of the military.

The Indian Navy and Coast Guards hold regular interactions with their counterparts in Saudi Arabia and the UAE. In 2018, navies of the three countries conducted the first joint exercise, Gulf Star I, off the UAE coast. Their air forces have conducted joint exercises such as Desert Eagle II at the Al-Dhafra Air Base in Abu Dhabi.

The UAE, Saudi Arabia and Qatar have shown interest in buyingthe Indo-Russian BrahMos supersonic cruise missile and India-madeAkash surface-to-air missile to counter the threat posed by their arch-rival, Iran. Defence production is another area of cooperation. UAE small arms firm Caracal won a contract to supply the Indian army with 93,000 close quarter battle rifles (carbines) in 2018, which is now being converted into a joint ‘Make in India’ project with Caracal transferring technology for its entire portfolio of products to be assembled and manufactured in India.

As for Pakistan, it has always enjoyed very close relations with the Gulf countries. It is heavily dependent on foreign remittances send back home by over 2.5 million Pakistanis working in these countries. Besides, Saudi Arabia and the UAE have generously been providing financial aid to Pakistan in different forms, the latest package worth more than $9 billion, extended over the last two years.

Other generous perks have been coming from the fraternal defence bonds. Pakistani military and air force personnel have been training Saudi Arabia and UAE armed forces for decades. Thousands of Pakistani troops stand guard at the holy sites of Mecca and Medina and important installations in Saudi Arabia. Elite Pakistani commandoes provide security to the royal family. It was Pakistan which had established the UAE Air Force, and the first five air chiefs of the UAE Air Force were Pakistan Air Force officers.

But over the last couple of years Pakistan’s relationships with Saudi Arabia and the UAE have suffered major setbacks. On French advice, the UAE prohibited the involvement of Pakistani officers in the operation of Rafale fighters acquired by the country in July 2020.

Pakistani Prime Minister Imran Khan’s ‘cowboy diplomacy’, such as calling for an alternative bloc of Islamic countries led by Turkey, did not go down well with the kingdoms. Khan had to pull back following a ‘shut up’ call from Riyadh.

Wooing Iran and not joining the Saudis in their war against Yemen has also elicited Saudi and UAE resentment. Pakistan’s foreign minister Shah Mahmood Qureshi blaming Saudi Arabia and the UAE for not taking up the Kashmir issue at the OIC meetings was, perhaps, the last straw for the Sheikhdoms. They struck back, demanding that Pakistan pay back billions of dollars of loans.

Another area of discord was recognition of Israel by the UAE and other Gulf countries which Pakistan felt was a betrayal of the Palestinian cause. Furthermore, the UAE has imposed work visa bans on 13 countries, including Pakistan. India is not on the list. That is a big worry for Imran Khan, already struggling with a severe financial crisis.Reports indicate that Shah MahmoodQureshihas rushed to the UAE to salvage the situation, which has send panic signals among Pakistani expatriates who have lost jobs due to the pandemic.

Pakistan’s loss, however, is a gain for India, which is seen as an attractive investment and trade destination by the Arabs. With enhanced defence collaboration, intelligence-sharing and joint counter-terrorism measures, General Naravane’s visit will go a long way towards cementing long-term relations with these important Gulf nations.

Richard Gregson is a freelance journalist based in Canada