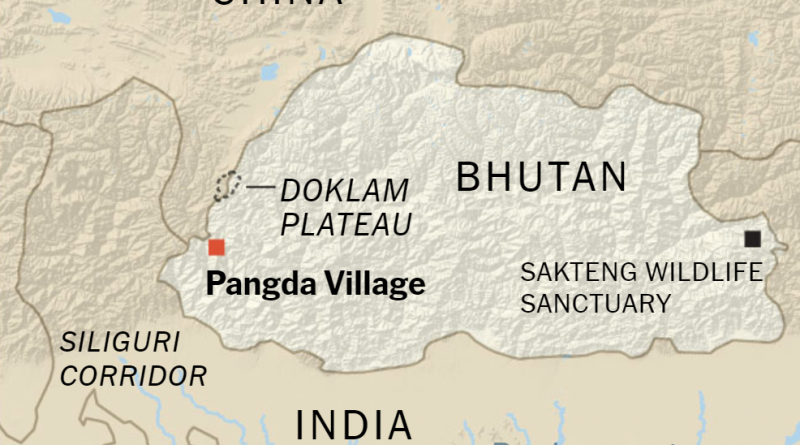 Claims by a US satellite company that China has recently built a village inside Bhutanese territory have been denied by both sides. Yet three years ago, similar satellite-backed claims that China was building a road across the Doklam Plateau of south-western Bhutan led to a stand-off with India – and ultimately Chinese withdrawal. Nicholas Nugent reports

Reports of a new village in the southern Himalayas, named Pangda, first emerged in the Chinese media in early October. A hundred people had been rehoused in newly-built homes in a settlement beside the Torsa River – a cause for celebration according to China Tibetan News and the Communist Party newspaper Global Times.

Then the US-based company Maxar Technologies published satellite images of the new village, claiming it was one mile – a little over a kilometre – inside Bhutan, an independent buffer state lying between India and China in the eastern Himalayas, presided over by a king. The story was picked up by the New York Times under the headline ‘Beijing Takes its South China Sea Strategy to the Himalayas’.

This reporter approached the Bhutanese government, only to be told: ‘The new Chinese village called Pangda shown in satellite images is inside their territory. There is no Chinese village inside Bhutan.’ Asked for a map to demonstrate the truth of its denial, Bhutan’s embassy in the Indian capital failed to respond. China, too, has ridiculed the claim that the new village lies within Bhutan’s territory.

Yet there is a precedent. In summer 2017 India suspected that China was building a road across the Doklam Plateau in Bhutan, to the north of the alleged location of Pangda. India feared the Doklam road would bring the People’s Liberation Army uncomfortably close to its Siliguri Corridor, also known as ‘the Chicken’s Neck’, through which road and rail links connect West Bengal state to its seven north-eastern states, across the top of Bangladesh.

After a 73-day stand-off between the armies of these two nuclear-armed neighbours, China withdrew from the Bhutan-claimed plateau. Restoration of friendly relations was signified when the Indian defence minister visited the nearby Nathu La border crossing with China and exchanged greetings with Chinese border guards.

According to a map published by the New York Times in November, Pangda is even closer to Siliguri, the Indian town which guards the 20-km wide strip leading to India’s north-east. So concern is not unwarranted, especially given that, in June this year, India-China relations deteriorated again following a clash between armies of the two countries in the Ladakh region, some 2,500 km to the west, in which 20 Indian soldiers and unknown numbers of Chinese were killed.

The size of Switzerland with a population under a million, Bhutan is a minnow alongside its two powerful neighbours, whose combined population is well over 2.8 billion. India’s defence treaty with Bhutan is aimed at protecting the small state from incursions by China, since the kingdom has only the two neighbours and has yet to establish formal diplomatic relations with China.

Asked about relations with China, Bhutan’s Delhi embassy would only confirm that 24 rounds of border delineation talks had taken place and that a 25th session was postponed because of the coronavirus pandemic. Talks alternate between the two capitals, Beijing and Thimphu. No information is available as to how much of the border has been delineated. In any case, delineation does not mean the border has been demarcated on the ground. The 699-km border stretches through mountainous Himalayan territory, much of it over 5000 metres high.

The denial by Bhutan should mark the end of the story, except that India remains acutely sensitive to any suggestion that China is extending its reach towards the strategic corridor.  Fifty-eight years ago India and China fought a brief but fierce war, during the course of which China occupied a large area ruled by India of what was then known as the North East Frontier Agency, now as Arunachal Pradesh state, before pulling back when a ceasefire was agreed.

Territory briefly occupied included the Tawang monastery, important to Tibetan Buddhists and positioned close to the strategic three-way border where Bhutan, India and China all meet to the East of Bhutan. China is said to call parts of Arunachal Pradesh ‘Southern Tibet’, while The New York Times mentions another Chinese claim to a Bhutanese wildlife reserve close to Tawang.

Bhutan, which recently marked the 113th anniversary of its statehood, once knew only Buddhist Tibet as its northern neighbour – before China extended its control over Tibet during the 1950s. In 1975 India took control of Sikkim, a principality to the west of Bhutan which, like Bhutan and Tibet, has a predominantly Buddhist population. Nepal, the third of what were once three Himalayan monarchies, abolished its royal dynasty in 2008 to become a republic.

The United States has an interest in this theatre too. It is keeping a watchful eye over what it sees as Chinese expansionism in the South China Sea to take control of islands claimed by Vietnam and the Philippines, and is sensitive to signs that China may be developing naval bases in Cambodia and the Torres Straits north of Australia. A recent report by the US navy and marine corps described China as ‘the most pressing long-term strategic threat’ to the US and its allies.

India and the United States should have been reassured by China and Bhutan’s denials that the new village was within Bhutan’s territory – except that it leaves unanswered the original claim. Why did Maxar report the new Chinese village as being within Bhutan and why did the New York Times, drawing comparison with the South China Sea and the frontier in Ladakh, cite it as an example of Chinese practice ‘to cement its position in territorial disputes by unilaterally changing the facts on the ground’?  The matter is unlikely to be resolved until China or Bhutan release a map showing what has been delineated so far.

Nicholas Nugent is a writer and broadcaster specialising in Asia. Previously on the staff of the BBC World Service, he has written books on India and Vietnam and contributed to others on Indonesia and Myanmar