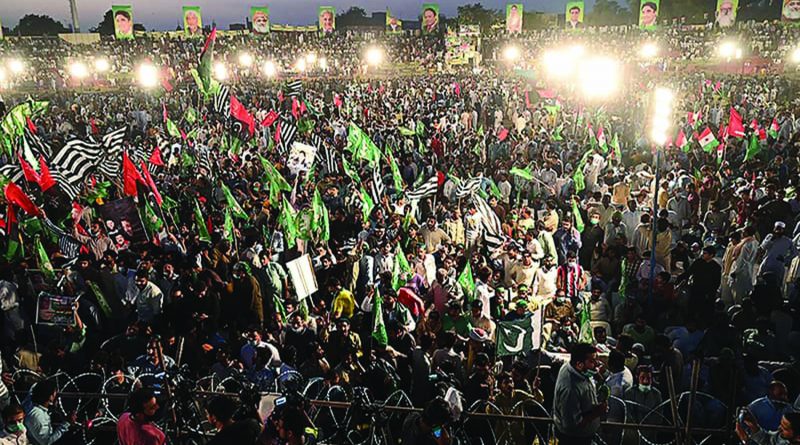 As the government and opposition continue to lock horns, Rahimullah Yusufzai sees no signs of an imminent resolution to Pakistan’s ongoing political crisis

The 11-party opposition Pakistan Democratic Movement (PDM) has decided to resign from the assembly seats won by its candidates in the July 2018 general election to exert further pressure during its ongoing campaign to oust Prime Minister Imran Khan’s government from power.

Lawmakers were asked to deposit their resignations with their respective party heads by December 31. The PDM leadership, which includes parties with secular, centrist, nationalist and religious orientation, would then decide when to forward the resignations to the speakers of the National Assembly and the four provincial assemblies. This process could take time as the speakers may cause delays in accepting the resignations until each lawmaker makes a personal appearance to verify the application and signature.

These resignations will intensify the confrontation between the two sides and generate uncertainty about the unfolding situation with the advent of 2021. Despite appeals and offers of mediation by saner elements, including former judges and the Supreme Court Bar Association, the government and the opposition have yet to agree to hold talks to resolve their disputes.

Sensing the PDM’s serious intentto paralyse the existing political dispensation, the Pakistan Tehreek-e-Insaf (PTI) government considered bringing forward the elections for the Senate to January/February, instead of its scheduled time of early March, to foil the opposition’s plan to deny it the opportunity to gain a majority in the Upper House of Parliament. The opposition parties would thus lose their dominance in the Senate as the PTI is set to make gains on the basis of its strong performance in the 2018 polls. The national and provincial lawmakers elect members of the Senate, but the PDM components will not have enough legislators to vote for their candidates to retain their seats. PDM head Maulana Fazlur Rahman has declared that the opposition won’t allow the PTI to gain a majority in the Senate to further consolidate its hold on power in the country after winning the ‘rigged’ election in July 2018.

However, legal and constitutional issues have been raised as to whether the Senate elections can be brought forward and if the polls can be held by a show of hands instead of secret ballot, as was done until now. The PTI wanted to adopt the show-of-hands method to prevent horse-trading, as in previous Senate elections the sale and purchase of votes was widely reported. Also, the ruling PTI wants to ensure that its own lawmakers aren’t tempted by offers of money from wealthy opposition and independent candidates for the Senate if the voting is done through secret ballot. It is obvious that the Senate elections would have to be held by secret ballot this time, as the show-of-hands method cannot be adopted at such a short notice due to constitutional issues.

The opposition launched its anti-government campaign in October 2020 by holding its first public meeting at Gujranwala in Punjab, the stronghold of three-times Prime Minister Nawaz Sharif’s Pakistan Muslim League-Nawaz (PML-N). Up to now, five big public rallies have been staged after Gujranwala at Quetta, Karachi, Peshawar, Multan and Lahore.

The Lahore public rally was big, with the PML-N taking the lead in organising it, but it did not break previous records for attendance, as is being claimed by the PDM. In fact, many felt the power show was below expectations, considering 11 parties had joined hands to make it a success. Earlier, the government refused to allow the Qasim Bagh Stadium in Multan to be used for the PDM rally, forcing the opposition to stage it in downtown streets, with less attendance. The government had banned such rallies to control the spread of coronavirus as the more severe second wavehit Pakistan. However, the opposition defied the ban by claiming that the government was positing this argument simply to scare the public from attending the rallies. The government is now claiming that these public events were super-spreaders of the virus and contributed to the rise in the number of Covid-19 cases in the country.

Another public meeting is planned at Larkana, the hometown of the Bhutto family in Sindh province,on December 27 – the 13thdeath anniversary of late Prime Minister Benazir Bhutto. It will be another PDM power show, as Sindh is the stronghold of the Pakistan People’s Party (PPP). In fact, it was widely believed that the PPP would find it difficult to sacrifice power in Sindh for the sake of PDM unity, but the party’s chairperson Bilawal Bhutto Zardari declared that his lawmakers had started submitting their resignations and all of them would resign by December 31. His party would go to any lengths, he added, to implement the PDM’s decisions in a bid to force the ‘selected’ prime minister to resign, thus allowing a fresh election that would undo the outcome of the 2018 poll, which he claimed was rigged by the ‘establishment’ in favour of the PTI.

Although Prime Minister Imran Khan argued that by-elections will be held to fill the significant number of assembly seats that fall vacant after the PDM resignations, it will be a challenge to do so due to the opposition’s pledge to resist such a move. The holding of by-elections could cause violence and lead to further political instability. The government could become weaker and its dependence on the military to remain in power would increase. While by-elections, according to the constitution, have to be held in the eventuality of seats falling vacant in a specified period of time, the political cost of such a move for the government would be high.

The premier has also been highlighting the anger he claimed the army felt over the opposition’s tirade against Chief of Army Staff General Qamar Javed Bajwa. Khan said General Bajwa was putting up with the diatribe for the sake of democracy in Pakistan. However, some of the opposition leaders alleged that the prime minister was trying to pitch the army high command against the PDM so that he could prolong his rule. The army leadership, for its part, has made it clear that it supports democratic rule and should not be dragged into politics.

While desire is strong among the people for a national dialogue to overcome the political crisis, there is no indication yet that the government and the opposition will engage in negotiations to resolve the issues threatening the country’s stability and further weakening the economy.