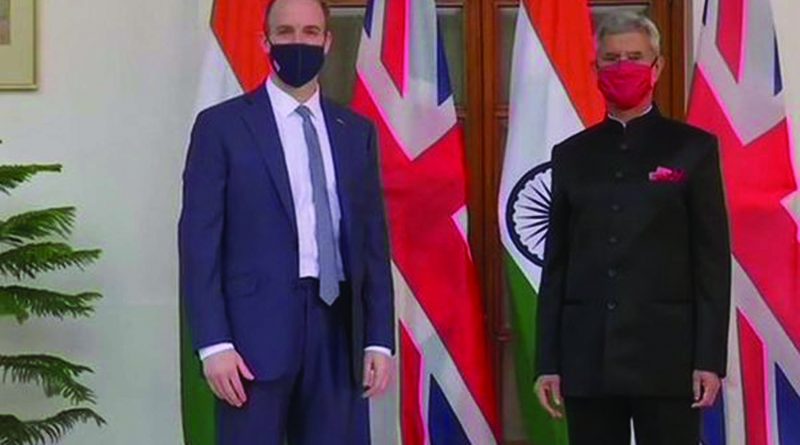 No more delusions of grandeur

Britain’s post-Brexit ambitions in the Indo-Pacific could boost trade and help strengthen security against Chinse expansionism. But it would do well to modify its self-image, advises Humphrey Hawksley

At the precise moment last month that the United Kingdom was embroiled in make-or-break negotiations on leaving the European Union, the foreign secretary, Dominic Raab, and his top civil servant were many thousands of miles away in India.

In the domestic echo chambers of British politics, there was talk of Raab being sidelined to foreign parts as the country faced its most important challenge for decades.

That talk was wrong.

The message the government wants to convey is that Brexit is done. Now, unencumbered by a sluggish Europe, Britain is going global and sees its future prosperity in the markets of the Indo-Pacific, a region filled with promise, flexibility and the can-do, forward-looking attitude lacking in Europe.

In Delhi, Raab paved the way, if the pandemic allows, for a visit by prime minister Boris Johnson, who is to be a guest of honour at Delhi’s annual Republic Day on January 26.In turn, his Indian counterpart, Narendra Modi, has been invited to the G7 meeting of leading economies to be hosted in Britain later this year and expanded to include India and two other Indo-Pacific powers, Australia and South Korea.

As of now, the UK’s Asia initiative is more symbolic than real and trade figures come nowhere close to the Indo-Pacific replacing the EU as Britain’s main trading area.

The UK’s annual trade is almost $2 trillion, of which the EU makes up almost half, $892 billion against its non-EU trade of $923 billion. Only China, Japan, Hong Kong and Singapore make it to the list of the top 15 export destinations and they account for just 12.1 per cent of the total.

A similar picture unfolds on a country-by-country basis. China comprises 5.1 per cent of Britain’s trade, India 1.6 per cent and so on, compared with Germany’s 10.2 per cent.

But by developing networks and trade agreements in the world’s fastest growing region, the government hopes to show that it is making a success of Brexit.  For their part, Asian countries believe that encouraging a fresh British involvement will not only boost trade outside of a protective EU but also strengthen the shifting strategic and security environment.

Britain will join a band of nations clubbing together to form a front against Chinese expansion.  At its centre is the Quadrilateral Dialogue comprising Australia, India, Japan and the United States.

At present, the UK’s Asia initiative is more symbolic than real

Those loosely attached are known as ‘like-minded’ governments, ranging from the democracies of South Korea and Taiwan to the autocratic regimes of Thailand and Vietnam. The aim is to ensure that trade routes remain open and China’s economic influence and military projection does not get out of hand.

While in Delhi discussing a ten-year UK-India roadmap, the creation of an ‘enhanced trade partnership’and cooperation with a coronavirus vaccine which India will be making in bulk, the British foreign secretary also made a point of describing India as a major strategic partner and did not rule out Britain joining the Quad.

Dominic Raab had made a similar Asian visit in February, going to Australia, Malaysia, Singapore and Japan. In September, the former Australian prime minister, Tony Abbot, was appointed a UK trade envoy because of his contacts in the region.

The International Trade Secretary, Liz Truss,told the House of Commons that she planned ‘to place the UK at the centre of a network of countries committed to free trade and to the global rules underpinning international commerce’.

While Raab concentrated on India, Truss visited Vietnam and Singapore in December, signing trade deals with both.  She announced plans to make Britain a hub for services and digital trade and that Singapore and the UK would starting negotiations for a Digital Economy Agreement, a treaty that establishes rules and collaborations around the digital industry.

Earlier, Truss had been instrumental in winning sponsorship from Asian governments for Britain to join the new Pacific regional trade grouping which spans Asia and Latin America. Known as the Comprehensive and Progressive Agreement for Trans-Pacific Partnership, it comprises 13.5 per cent of the global economy.

Pivotal to Britain’s Asia policy has been Japan, which has played a crucial role throughout the Brexit process because of its large interests in the UK. So it is no coincidence that Japan signed Britain’s first trade deal with a major economy.

Japanese companies have continued to invest, particularly in the car industry which employs tens of thousands and is seen as a weather-vane to confidence in the British economy..

Former Japanese prime minister Shinzo Abe even wrote a foreword to a recent report by a centre-right think-tank, Policy Exchange, which broadly reflects government policy.  Entitled ‘A Very British Tilt: Towards a new UK strategy in the Indo-Pacific Region’, Abe wrote of Britain entering a ‘new era of innovative thinking, expansion of economic opportunity, and strengthening of stability’.

The report argues that London should adopt a twin-track approach in Asia, focusing not only on trade but also on security. Central to this will be the deployment later in the year of the new aircraft carrier HMS Queen Elizabeth, which will bolster the UK’s military presence in the Indo-Pacific.

The carrier group will include warships from France, the Netherlands and possibly other European countries, as well as American air crews. It will carry out exercises along the way with India, Malaysia, Singapore, Japan, Australia and others, showing Beijing the range of multilateral fire power available should it push too far.

There are, however, a string of potential pitfalls, not least in the way Britain behaves in a region made up of many former colonies which remain sensitive about history.

Prime minister Boris Johnson is well-known for his gaffs and misplaced jokes. During the Brexit process and the launch of the Global Britain campaign, his supporters openly discussed a concept known as ‘Empire Two’,about Britain regaining its former world power status.

In India, Johnson faces arguments about reparations for damage caused during colonial rule and has already come under pressure in the House of Commons to speak out on domestic Indian issues such as support for farmers protesting new agricultural laws. There is also deep suspicion that his real agenda is to sell British weapons.

‘This guy’s tomfoolery will not go down well if he spends his time larking around and quoting Rudyard Kipling,’ said one Indian official who did not wish to be named.

There is a similar delicate position throughout Asia, which Britain will best address by readjusting its own perception of itself.

It needs to tread carefully, presenting itself not as a former coloniser, but as a mid-ranking modern power working with counterpart nations against regional hegemony and filled with ideas about industry and trade that will make everyone richer and safer.

Humphrey Hawksley is a former BBC Asia Correspondent. His latest book is Asian Waters: The Struggle Over the Indo-Pacific and the Challenge to American Power