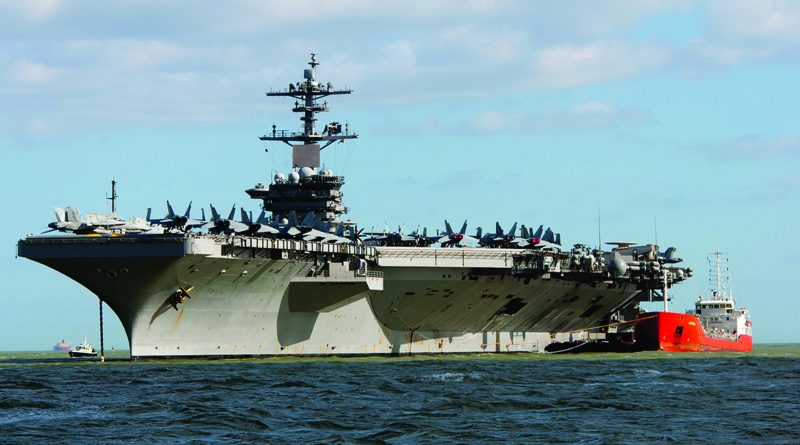 While the new US president’s rhetoric on China may be less strident than his predecessor’s, Humphrey Hawksley  foresees no return to the conciliatory policies of the Obama administration

As Donald Trump was heading out of the White House, China’s Xinhua news agency did not mince its words: ‘Good riddance to the current US administration and its final madness,’ it declared.

President Xi Jinping has called for a ‘healthy and stable’ relationship with the Biden administration, one that upholds principles of ‘no conflict’ and ‘no confrontation’.

Yet within days, Chinese warplanes were violating Taiwanese airspace and an American carrier group, led by USS Theodore Roosevelt, sailed into the area that Beijing regards as its own backyard. The carrier group commander stated that the mission was ‘to ensure freedom of the seas’, a reference to Beijing’s sovereignty claim over much of the South China Sea and its building of military bases there.

And with that, a new and different era on how the US deals with the Indo-Pacific began.

While the rhetoric will soften, there will be no straightforward return to the policies of the Obama administration, which are now viewed by many as allowing China too much freedom without accountability.

The idea, held then, and for a couple of decades beforehand, was that engagement with China, encouraging its wealth creation and the growth of an educated middle class, would bring it into closer alignment with Western democratic values.

That did not happen, and the Chinese Communist Party continues to rule supreme.

Donald Trump reversed the policy and called Beijing out. But, far from buckling under American pressure, President Xi Jinping pushed ahead on policies that lit nerve ends in Western capitals, specifically violating its treaty with Britain over Hong Kong and incarcerating Uighur Muslims in camps in Xinjiang which drew comparisons to the Nazi Holocaust.

The swing between the soft Obama approach and the hard Trump one has brought into play two new realities about China, Asia and America.

First, Beijing has no intention of joining a trajectory that takes it towards any kind of Western-style democracy, with the accompanying values about freedom, human rights and so on.

Second, the region cannot rely on American engagement. While Biden talks of multilateral engagement, four or eight years from now a new president might again step back in and take up the Trump isolationist mantle.

Messages of congratulations from Indo-Pacific leaders to the new US president reflect some, but not all of this.

India’s Narendra Modi gave a reminder that ‘the India-US partnership is based on shared values’ which Modi said he was committed to taking to even ‘greater heights.’ Pakistan’s Imran Khan tweeted: ‘Look forward to working with @POTUS in building a stronger Pak-US partnership…& promoting peace in region & beyond.’

Prime Minister Lee Tsien Loong of Singapore, often seen as a weather-vane for Southeast Asia, told Biden, ‘You can continue to rely on Singapore as a consistent and reliable friend and partner, as we advance our countries’ shared interests and deal with common challenges.’

Prime Minister Prayut Chan-O-Cha of the military-led regime in Thailand noted that his country was the United States’ oldest treaty partner in Asia, with ties of friendship dating back over two centuries and a strategic partnership that ‘has progressed through thick and thin’. Malaysia spoke about the great importance of its relationship with the US.

Indonesia’s President Joko Widodo called on Biden to ‘continue to strengthen our strategic partnership, not only for the benefit of our two nations, but for a better world for all’.

The Philippines, which has been overtly friendly toward Beijing, was even more muted, speaking only about maintaining ‘close and friendly ties’ with the US.

While Biden has declared a policy reset, saying ‘America’s going to reassert its role in the world and be a coalition builder’, many Asian governments are wary, asking how much they can rely on the US when the chips are really down.

Manila-based academic Richard Javad Heydarian lays out benchmarks of disappointment when the Clinton administration failed to act on China’s occupation of Mischief Reef in the Spratly Islands in 1995, and Obama similarly did little or nothing when the Philippines lost control of Scarborough Shoal in 2012.

‘What such liberal boosterism tends to overlook,’ writes Heydarian, ‘is how some of America’s oldest allies, especially in Asia, have grown increasingly sceptical of their strategic entwinement with Washington.’

Referring to fears of a ‘third Obama administration’, Heydarian advises that Biden needs to ‘reassure perturbed allies such as the Philippines that its Asia policy won’t lead to the wholesale rejection of Trump’s tough stance on China’.

Biden’s foreign policy team comprises multilateralists who know Asia well:Secretary of State Anthony Blinken, Secretary of Defense Lloyd Austin, National Security Adviser Jake Sullivan and Indo-Pacific Coordinator Kurt Campbell. The term they are using on China policy is ‘managed coexistence’, accepting China for what it is and working out where to engage and where to contest.

This is not a reset to the Obama years. Nor is it a reversal of the Trump years. It is something evolving and new, with one indicator being the arrival of the USS Theodore Roosevelt in the South China Sea just days after the inauguration.

Another largely overlooked indicator took place at the inauguration itself. For the first time ever Taiwan’s de-facto ambassador in Washingtonwas invited to the inauguration with a White House spokesperson saying unequivocally, ‘President Biden will stand with friends and allies to advance our shared prosperity, security and values in the Asia-Pacific region – and that includes Taiwan.’

America and China have long stood by their very different sets of values and systems of governance. Biden’s challenge will be to see if and how they can live together in Asia.

Humphrey Hawksley is an author and former BBC Beijing Bureau Chief. His latest book is Asian Waters, The Struggle Over the Indo-Pacific and the Challenge to American Power