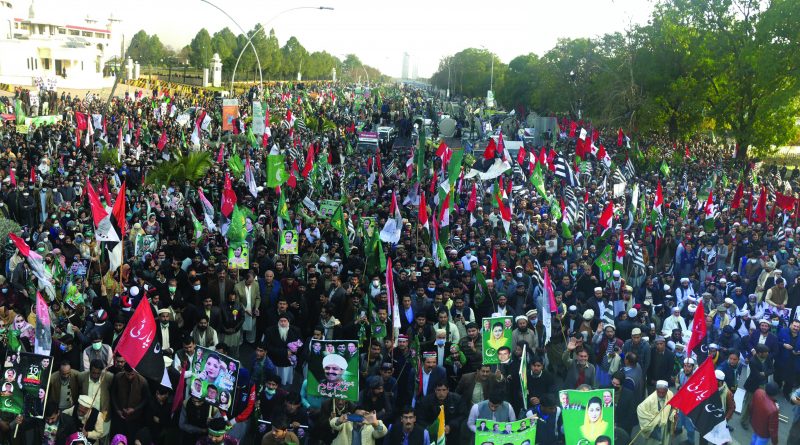 Plagued by domestic problems, the PTI government is nonetheless holding off the opposition coalition, which is contending with schisms in its ranks. Rahimullah Yusufzai  reports

Although the 11-party opposition alliance, Pakistan Democratic Movement (PDM), is still holding public meetings to mobilise the people in its campaign to oust Prime Minister Imran Khan’s government, it is facing differences in its ranks due to the stance taken by one of its major components, the Pakistan People’s Party (PPP).

The PPP broke ranks first by insisting on contesting assembly by-elections in January-February on seats that fell vacant due to members’ deaths or other reasons. It then persuaded the component parties of the PDM that they should contest the Senate elections to be held in early March instead of boycotting them, to avoid enabling the ruling Pakistan Tehreek-e-Insaf (PTI) to gain a majority in the Upper House of Parliament.

These two decisions affected the PDM’s earlier plans to stage a ‘long march’ on the federal capital, Islamabad, in February by bringing huge numbers of its supporters to paralyse the PTI-led coalition government and force the prime minister to resign. Many saw it as a clear signal by the PPP that it was not in favour of the ‘long march’, which could intensify the confrontation between the PDM and the government and even lead to violence. In such an event, the existing political system could collapse and democracy be derailed.

The latest proposal by the PPP chairperson Bilawal Bhutto Zardari – to move a no-confidence resolution in the parliament against Imran Khan and use peaceful and democratic means to remove him from power – could accentuate the differences in PDM ranks. It goes against the previous PDM decision to use street-power to send the government packing. Former Prime Minister Nawaz Sharif’s Pakistan Muslim League-Nawaz (PML-N), which along with the PPP is the biggest party in the PDM, was quick to remind Bilawal Bhutto Zardari about the pitfalls of trying to unseat Imran Khan through a vote of no-trust. It advised him to first count the number of lawmakers in the National Assembly who would vote for the no-confidence resolution and ensure that such a move would succeed.

Neither the PML-N nor the other PDM components, including the JUI-F (led by the opposition alliance head Maulana Fazlur Rahman) was impressed by the PPP logic. They are aware that seeking passage of the no-trust resolution against the prime minister isn’t easy because the government is resourceful enough to defeat such a move. Fazlur Rahman, the most hawkish leader in the PDM who had worked hard, since losing the July 2018 general election to the PTI, to bring the opposition parties on to one platform, has until now shaped the agenda and action plan of the alliance. He advocated a no-compromise position, refused to negotiate with the PTI government until the prime minister resigned, and strongly criticised the powerful military for facilitating Imran Khan’s victory in the last poll and standing by him, despite his government’s failure to deliver on its promises.

According to its leadership, the PPP wasn’t aware that Nawaz Sharif – who has been living in the UK since November 2019, after being allowed by a court to proceed abroad for medical treatment – would take such an aggressive stand against the military high command. Sharif even mentioned by name Army chief General Qamar Javed Bajwa and ISI chief Lt Gen Faiz Hameed, accusing them of interfering in politics and getting him deposed from the office of prime minister. Bilawal, the young PPP leader, is on record as saying he was taken by surprise by Nawaz Sharif’s tough remarks. Unlike the other PDM parties, the PPP has high stakes in the existing political set-up as it is in power in Sindh and would most likely be able to win most Senate and National and Sindh Assembly seats from the province in the next elections.

The PPP doesn’t want to rock the boat and openly confront the military, which plays a decisive role in Pakistan’s decision-making process. Also, sacrificing its government in Sindh and asking its lawmakers to quit their seats in line with the PDM decision cannot be easy, even though the party leadership managed to get resignations from all of them by the December 31, 2020 deadline. However, the resignations are still with the PPP high command and no decision has been taken on when to present them to the respective speakers of the national and four provincial assemblies, as required by law and constitution.

While the PPP is still part of the PDM and has been reiterating its pledge to abide by the collective decisions of the alliance, suspicions about its intentions are on the rise. There have been unsubstantiated media reports that the PTI government is considering offering concessions to the PPP in the corruption cases filed against Bilawal’s father Asif Ali Zardari, the spouse of the late Benazir Bhutto and former president of Pakistan. The government is also making efforts to exploit the differences in the PDM and in some of its component parties, including Maulana Fazlur Rahman’s JUI-F, which recently suffered a split when four of its senior leaders revolted against the Maulana for practising dynastic politics. They were promptly expelled from the party and are now busy forming a breakaway faction to be known as JUI Pakistan.

Despite its internal differences, the PDM has continued to hold public rallies to maintain pressure on the Imran Khan government. It is also hoping to benefit from the grouping in the PTI, particularly during the upcoming election for 52 of the 104 Senate seats that, despite the government’s efforts, would have to be held though secret rather than open ballot. The PDM also staged a protest on January 19 outside the Election Commission of Pakistan in Islamabad, against the delay in the proceedings against the PTI in the so-called foreign funding case. The opposition has alleged that the PTI and Imran Khan received and misused funds from donors abroad, including the US. The case is with the Election Commission, but has taken a long time to make a decision. The PTI has rejected the allegations against it, in the case that was filed by a former senior member of the party.

The government had announced earlier that the PDM would be allowed to organise the protest rally outside the Election Commission office. even though it is located in the ‘Red Zone’ where protests are banned. However, the government warned that action would be taken if the protestors took the law into their hands. The protestors, led by Maulana Fazlur Rahman, former prime minister Nawaz Sharif’s daughter Maryam Nawaz (who is vice-president of the PML-N), former prime minister Raja Pervez Ashraf (who belongs to the Bhuttos-led PPP) and other leaders of the component parties, remained peaceful.

All this while the government had to cope with widespread protests by Shias in major urban centres. These were held in solidarity with the Hazara community, which held a sit-in for several days in Quetta, along with the bodies of the ten coalminers who were brutally killed in a night-time attack in the Bolan district of Balochistan. ISIS, or Daesh, which is avowedly anti-Shia, claimed responsibility for the attack, as it did all previous such assaults, even though its affiliate, Lashkar-e-Jhangvi, due to its visible presence in Balochistan, was actually behind this act of terrorism. The prime minister also landed himself in trouble by making an insensitive statement that he cannot be ‘blackmailed’ into visiting Quetta to console the grieving families. He finally paid a visit to Quetta when the bodies had been buried, as demanded by him, and offered condolences to the victims’ families.

Meanwhile, other pressing issues also need the beleaguered PTI government’s attention. The depressing economic situation, the second wave of the coronavirus pandemic, continuing terrorist attacks by TTP and Baloch separatists against security personnel and pro-government elders, the burning down of the shrine of a Hindu saint by a Muslim mob in Karak district of Khyber Pakhtunkhwa province, and the assault on a Sikh gurdwara in Nankana Sahib in Punjab have all kept the government poised to defuse the situations. The PDM’s anti-government agitation is also a major cause of concern, and February and March will be crucial to watch, to see if the opposition alliance will fall apart under the weight of its differences, or whether the government will buckle under the pressure. For the time being, though, the government is confident in overcoming the PDM challenge.