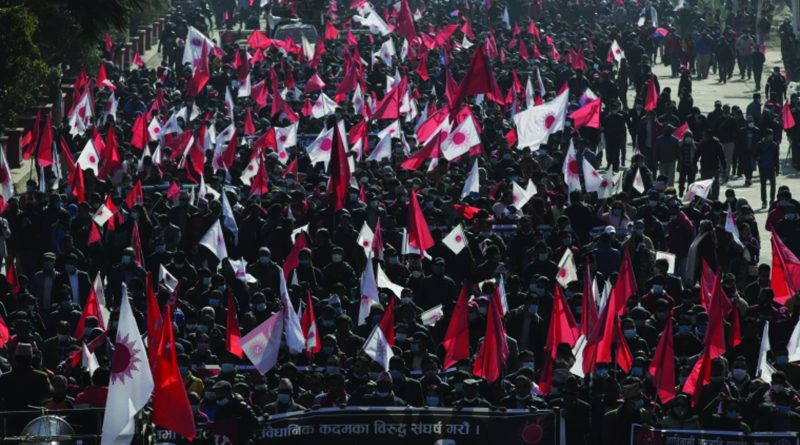 For the first time since Mount Everest was declared the world’s highest peak by the Survey of India in 1847, officials from the Nepalese Survey Department have been working hard for the past two years using different methods, including scaling the peak, to measure the height of the mountain. Its elevation (snow height) was precisely calculated to be 8,848.86 m (29,032 ft).

Even as the process was completed, baffled officials at the department – which had spent $1.3 million on this endeavour, working alongside six foreign firms that had donated sophisticated equipment and gadgets – were told to jointly announce the height of Everest with Chinese experts.

They were informed that the joint declaration, signed between the two countries in October 2019 during Chinese President Xi Jinping’s Nepal visit (the first by a Chinese leader in 23 years), stated that China and Nepal will announce together the height of Mount Sagarmatha/Zhumulangma, as it is known in Nepalese and Chinese respectively. This illustrates the influence China wields in Nepal after the Nepal Communist Party government, led by K.P. Sharma Oli, came to power three years ago.

Nepal is a clear example of how foreign interference and a corrupt, overambitious politician can bring disaster to a country

But even the Chinese were taken aback when Prime Minister Oli recommended the dissolution of the Pratinidhi Sabha, the Lower House of Parliament, on 20 December, plunging Nepal into a political and constitutional crisis. Acting on Oli’s advice, President Bidya Devi Bhandari, an Oli loyalist, dissolved the House and announced fresh elections on April 30 and May 10, 2021.

The Oli government had completed over half its five-year term and had another two years to go. His Nepal Communist Party (NCP) had a majority in Parliament, with no threat from the opposition. By dissolving the House, Oli actually struck at his arch-rival within the party and the popular leader of another faction, former Prime Minister Pushp Kamal Dahal, alias Prachanda, his nom de guerre from his underground days. Dahal is also the co-chairman of the NCP.

Dahal and his followers are furious and have been holding demonstrations against Oli, demanding the immediate restoration of Parliament. Four former chief justices have said the prime minister has no right to recommend dissolution of the house halfway through its five year term. The dissolution has been challenged in the Supreme Court.

Oli was the compromise candidate for prime minister, with Dahal assured of the top job halfway through the term, two-and-a-half years later, when Oli was to step down. But alarm bells started ringing when Oli overshot his half-term and began to consolidate his position in the party and influential political circles. This was resented even by his comrade-in-arms and former prime minister Madhav Kumar Nepal, a senior leader of the now defunct CPN (UML).

By appointing loyalists in government bodies and extending favours, Oli has built a support base among the elite. His critics allege he has thus systematically undermined independent institutions like the Election Commission, the Department of Money Laundering Investigation and the Commission for the Investigation of Abuse of Authority. But there is method in this madness, says a Nepal expert. Oli wants to ensure that, while no one touches him, he can go after other corrupt politicians, both inside and outside his party, making them fall into line. As in most developing countries, corruption is widespread in Nepal.

That he has failed to deliver on his election promises is apparent from media reports. The Covid-19 situation has only exacerbated the crisis. Hundreds of thousands of Nepalese working in India, Gulf and South-East Asian countries have returned home and are jobless. In order to distract attention from these problems, Oli has resorted to the oft-tried ploy of whipping up ultranationalist and anti-India sentiments. As traditionally friendly relations with India came under strain, he went out of his way to promote government-to-government as well as party-to-party relations with China and the Chinese Communist Party (CCP). Naturally, the bosses in Beijing were happy.

The pro-China tilt of the NCP, and Oli in particular, had made the Chinese, who were looking at expanding their Belt and Road Initiative, quite proactive. From Xi Jinping’s visit, followed by other high-power delegations, to investments in several infrastructure projects, the Chinese can be seen everywhere.

But internecine dissension in the NCP has been a headache for Oli’s Chinese mentors. Anti-Oli factions have been fiercely critical, even demanding the prime minister’s resignation, while for his part, Oli accused his opponents of being corrupt. It has been an unending war of nerves, with accusation and counter-accusation.Nepal is a clear example of how foreign interference and a corrupt, overambitious politician can bring disaster to a country

Since May last year, the charming Chinese Ambassador to Nepal Hou Yanqi has been working overtime, meeting leaders of different NCP factions in a bid to resolve their differences. However, her meetings with Dahal and Madhav Nepal did not cut much ice, thanks to Oli’s arrogance and obduracy.

Alarmed by the latest developments in Nepal, China rushed a four-member delegation, led by Vice Minister of the International Department of the CCP, Guo Yezhuo. Guo is said to be the one responsible for the unification of the two Communist parties in 2018. The high-powered delegation met Nepal’s president, Oli and other party leaders. They also met opposition Nepali Congress leaders, as there is much at stake for China in Nepal.

Civil society and opposition parties have taken strong exception to China’s meddling in Nepal’s internal affairs. Protesters in Kathmandu greeted the Chinese delegation with slogans like ‘Back off China’, ‘Return encroached Nepali land to Nepal’ and ‘Stop casting an evil eye on Sagarmatha [Mt Everest]’.

India, on the other hand, maintains a hands-off approach and described the recent developments as‘an internal matter for Nepal’. Nevertheless, they have a direct bearing on India’s security. Beijing views Nepal as a strategic asset, more so because it borders the unstable Tibet Autonomous Region. There have been reports of Chinese ‘creeping encroachment’ into Nepalese border villages. Sometime ago, villagers of Limi complained to officials about Chinese construction on the Nepali side of the border at Lapcha Pass. The Lapcha Pass is the only place in Nepal from where one can view Mt Kailash and Mansarovar Lake.

Officials found nine new permanent structures on what has been traditional pasture. With a border pillar missing, it was difficult to ascertain where the border starts. The Chinese insisted it was their territory.When the news spread and was picked up by Indian media, it became a big issue. Adopting an ostrich-like attitude, the Nepalese Foreign Ministry issued a statement saying ‘the structures were built on Chinese land’. The local official who reported the incident to higher-ups was reprimanded. Luckily for him, a Nepal Army team found the missing border pillar No. 11 buried under snow and rubble on a ridge at a height of above 5,000 metres, and the matter has, for the time being, been laid to rest.

In August, reports emerged of satellite images showing the Chinese military constructing a surface-to-air missile site and other infrastructure on the banks of the Mansarovar Lake in the India-Nepal-China tri-junction area, near the controversial Lipulekh pass. The number of PLA troops has considerably increased across the LAC at Lipulekh Pass, parts of North Sikkim and Arunachal Pradesh, Indian army sources said.

India’s construction of a road to Lipulekh Passat 17,000 fthad led to a diplomatic row between India and Nepal.The Oli government seized the opportunity to further its anti-India agenda by releasing new maps of Nepal depicting areas of Kalapani, Lipulekh, and Limpiyadhura as its territory.The road – which makes it easier for pilgrims to reach Kailash-Mansarovar, a pilgrimage site in Tibet – connects the Lipulekh Pass at the India-China border, 17,000 ft above sea level, to Dharchula, a town in Uttarakahand’s Pithoragarh.

Meanwhile, Nepal’s Foreign Minister, Pradeep Kumar Gywali, is visiting New Delhi forthe much delayed sixth round of the India-Nepal Joint Commission meeting. Interestingly, Oli is sending his foreign minister at a juncture when he desperately needs support from all possible quarters. He seems to be playing the India and China cards so that he has the broadest possible backing of both powerful neighbours in his own factional struggle at home. How things unfold remains to be seen.

Richard Gregson is a freelance journalist based in Canada