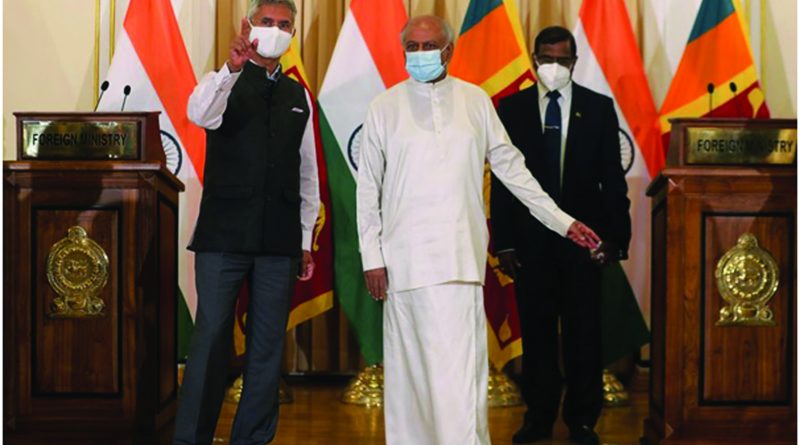 The Rajapaksa administration is trying to rebuild relations with India after some tense exchanges. But, warns Neville de Silva, testing times lie ahead

He should have visited the new Rajapaksa government earlier, when it won a resounding victory in last August’s parliamentary election, following on from Gotabaya Rajapaksa’s presidential election triumph in November 2019.

But with a new government in office in Colombo struggling to contain Covid-19 as it rampages through the country, the visit was delayed until the Indian minister finally received the signal to come to the capital he had known so well as a diplomat in the late 1980s.

Now, elder brother Mahinda is back in the saddle as prime minister after two previous terms. During that time Sri Lanka’s ties with India dipped seriously, particularly after Sri Lanka permitted Chinese submarines to dock in Colombo port a day before Japanese Prime Minister Shinzo Abe’s visit to the island nation in September 2014, the first Japanese premier to do so in 24 years.

The Rajapaksa brothers are now trying to rebuild relations with India after Mahinda alleged Indian intelligence was partly responsible for his defeat at the 2015 presidential election.

With regional and non-regional big powers increasing their naval activity in the Indian Ocean and Sri Lanka’s growing political and economic relations with China arousing the suspicion of some nations in the Indian Ocean and beyond, mainly in the Pacific, the Rajapaksa administration quickly recalibrated its foreign policy to fall in line with what the Modi government called ‘neighbourhood first’.

Shortly after his inauguration as president, Gotabaya Rajapaksa visited India on his first overseas state visit, where he held wide-ranging discussions with Prime Minister Narendra Modi. That was their first official meeting.

Thereafter the Rajapaksa government articulated its new foreign policy approach – ‘neutrality’ with all countries –making no mention of Sri Lanka’s long-time commitment to non-alignment, as enunciated by prime ministers Solomon Bandaranaike and thereafter by his widow Sirima Bandaranaike, going back to the 1950s.

But later the Rajapaksas and their new foreign policy advisers quickly attached the non-aligned ‘label’ to ‘neutrality’. Perhaps they did not want to show a rupture with the island’s decades-old policy and its central role in the Non-Aligned Movement (NAM), having hosted the NAM summit back in 1976,when it was a powerful political force in the international arena.

What Sri Lanka’s position in today’s world of geopolitical contestation in the vital Indian Ocean will turn out to be – located strategically as it is and having to juggle with a policy of neutrality on the international stage – is certainly a matter of major security concern to India.

India and China are currently eyeball–to-eyeball on India’s north-east mountain frontier after armed clashes last year. Moreover with a new administration in Washington and President Joe Biden likely, amid more pressing domestic issues, to take some time to flesh out his Indo-Pacific policy after President Trump’s aggressive China engagement, New Delhi itself will need to wait.

The Indian Ocean issue, which is hemming in Sri Lanka due to its geostrategic location, is a multilateral contestation in which Colombo might well end as a small player in the years ahead as international politics and interests change.

But for India there are other matters of self-interest and possible security concerns that New Delhi cannot ignore or neglect, since it has its finger in the Sri Lankan domestic pie.

The message the External Affairs Minister brought to Sri Lanka’s leaders was measured and nuanced, certainly not abrasively Trumpian, as were US Secretary of State Mike Pompeo’s last words in Colombo late last year.

Nevertheless, New Delhi’s message was not without a sting. It was an admonition to Colombo on a longstanding issue which some of Sri Lanka’s current leaders would consider essentially an internal matter. But India is a stakeholder and cannot step back from it.

The issue in question concerns Sri Lanka’s ethnic and religious minorities, especially the Tamil minority mainly in Sri Lanka’s north, with whom Indian Tamils from the southern state of Tamil Nadu have close ethnic, cultural and linguistic affinities.

When Tamil insurgent groups gradually unleashed violence against the Sri Lankan state, several of them operated from south India, basing themselves in Tamil Nadu and acquiring arms and arms training. Indian media claimed that training camps for Sri Lankan militants had existed in southern India during the time of Prime Minister Indira Gandhi and since.

Other militant Tamils fled the country to seek asylum in the west. They set up powerful lobby groups urging western governments to speak out against the Sri Lanka state, accusing it of human rights violations in the latter stages of the 27-year-old war.

In 1987, when the principal insurgent force, the Liberation Tigers of Tamil Eelam (LTTE), led by Velupillai Pirihaparan, was facing defeat in the north and was retreating into the jungle, India intervened with a demarche that called for a halt to the fighting, freeing the cornered LTTE.

This eventually led to Prime Minister Rajiv Gandhi flying to Colombo at the end of July 1987 to sign the Indo-Lanka Accord that was virtually forced on President Junius Jayewardene.

The agreement called for, among other things, the devolution of power to the Tamil areas and the rest of the country through Provincial Councils and powers of self-administration. Sri Lanka had to adopt the 13th amendment to the constitution to make it possible, much to the opposition of senior cabinet ministers and the people, especially the Sinhala majority.

President Jayewardene had little option but to cave in. But he did manage to wring one condition out of Rajiv Gandhi, who agreed to send an Indian Peacekeeping Force to stop the war and disarm the militants.

But instead of surrendering their weapons, the Tamil militants turned the guns on the peacekeepers, leading to ferocious battles in which some 1200 Indian soldiers died and several thousand were wounded. India, once looked to as the saviour of the Tamils, was now considered an enemy.

The soldiers who were inducted in 1987 left Sri Lanka in 1990 after then Sri Lanka President Ranasinghe Premadasa insisted that New Delhi withdraw its forces without delay, as their presence had caused a bloody uprising by Sinhala insurgents in the south.

Though the war ended more than ten years ago, with the military defeat of the LTTE, the UN and several countries including India are increasingly critical over Sri Lanka’s lackadaisical approach to post-war reconciliation with the minority Tamil community.

When Prime Minister Modi met President Gotabaya Rajapaksa on his state visit to India in November 2019, the Indian leader raised the issue in very specific terms. He urged Sri Lanka to ‘take forward the process of reconciliation to arrive at a solution that meets the aspirations of the Tamil community for equality, justice, peace and respect’, replacing the word ‘dignity’ that Minister Jaishankar had initially used when he first met Gotabaya Rajapaksa in November 2019, with the word ‘respect’.

More importantly Prime Minister Modi added that ‘it includes the implementation of the 13th amendment’.

Therein lies India’s, and the UN’s, rising acrimony with Sri Lanka. Not only does President Gotabaya Rajapaksa believe that what Colombo does with the 13th amendment, which set up the provincial councils, is a matter for Sri Lanka alone; he had already told the UN to keep out of the internal affairs of member states.

It seems that before long, Colombo will have to confront not only countries that are pressing the Tamil cause but even the UN Commissioner for Human Rights, who has prepared a tough report on Sri Lanka to be presented to the Geneva sessions starting later in February.

With China building a new port city near Colombo harbour from reclaimed land in the Indian Ocean, called Colombo Port City – of which several hectares will be under Chinese control – India was also anxious to get a foothold close to the port, to keep an eye on Chinese activities. It entered into a tripartite agreement with Sri Lanka and Japan during the previous government to expand the Eastern Container Terminal (ECT), through which 60-70% of India’s trans-shipped goods pass, and keep the ECT functioning.

But now the project has run into trouble, with port trade unions and Sri Lankan nationalist groups opposing foreign countries or investors having a share in the project, as Sri Lanka is seen to be surrendering its sovereignty, which the Gotabaya government had earlier refused to do.

With the Commissioner for Human Rights baying for Sri Lanka’s blood and India breathing down Colombo’s neck, some see trouble ahead for the Rajapaksa administration.