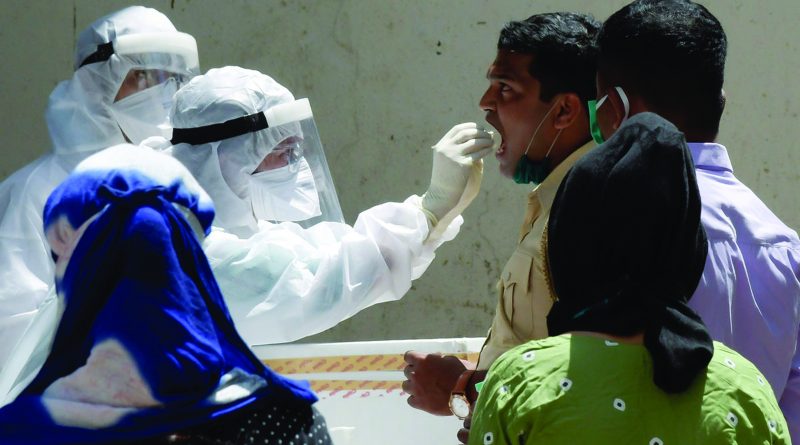 As India reaches out to its neighbours in the battle against the coronavirus, G. Parthasarathy  highlights the importance of cooperation in dealing with the pandemic and other global crises

India is no stranger to dealing with human disasters and pandemics. Its people faced six cholera pandemics and, during the 19th century, the Bombay plague, in 1896. The deadliest disease that struck the world in the 20thcentury was the pneumonic pandemic, also known as the Spanish flu, which emerged in 1918 and led to the deaths of an estimated 50 to 100 million people worldwide. In India alone, 17-18 million people died of Spanish flu. Moreover, during the last century, the world was hit by several other pandemics, including smallpox, dengue fever, and the H1N1virus swine flu. But while most pandemics in the 20th century were primarily regional in character, the coronavirus (Covid-19) which we are now confronting has a more dangerous and global reach. The past nine months have therefore been marked by unprecedented efforts to get people across the world to respond to the challenges posed by the virus, by observing simple practices such as washing hands regularly and wearing face masks.

This has also been accompanied by the adoption of measures for quick personal testing of millions of people. The growing production of new vaccines has also made people more confident that there are now good prospects for the threats posed by the coronavirus to be contained, and ultimately eliminated.  Such optimism arises from the fact that scientists across the world have worked tirelessly to develop vaccines to meet the life-threatening challenges to humanity posed by the coronavirus. But even as this process progresses, one has to be prepared for the emergence, over time, of new and more dangerous strains of the virus. One has to also recognise, sadly, that advanced countries could have done more to help developing countries meet the challenges posed by the pandemic. Covid-19, like climate change, has highlighted that nation states have to constructively cooperate for the human race, as a whole, to survive and progress.

Supplies of vaccines have already reached the Maldives, Nepal and Bhutan

The Covid-19 pandemic is now at a stage where the largest numbers of cases and casualties are in some of the world’s most economically advanced countries. The US has suffered the largest number of fatalities in the world, with over 25 million cases at the time of writing, and more than 420,000 deaths.  The UK, in turn, has faced over 3.6 million cases and 100,000, deaths. Other European countries, too, have faced unexpectedly high casualties.

With a population of 1.36 billion people, India has experienced 10.7 million Covid-19 cases and 154,000 deaths to date. The challenges of Covid have been met most successfully by East Asian countries like Japan, China, Taiwan and Vietnam, although the Modi Government and the Prime Minister himself are regularly spreading the word throughout India, urging constant use of masks, personal distancing and regular testing, while achieving a current recovery rate of around 97%. The New Year has begun with relief and optimism in India, because of the continuing decline in the number of new cases and death rates. But we are dealing with an unpredictable pandemic, where new cases can rise suddenly and sharply.  Growing international cooperation is the need of the hour to strengthen preventive measures. There has been disappointment in India and other developing countries that some of the world’s least developed countries have received relatively little by way of financial and medical attention and assistance.

The first vaccine being produced and used in India is Covishield, developed by Astra Zeneca and Oxford University and manufactured by the Serum Institute of India. The second vaccine, Covaxin, has been developed and manufactured by Bharat Biotech and the Indian Council of Medical Research. The task ahead is onerous. These manufacturers have to meet the requirements of 1.28 billion Indians, as well as meeting the needs of citizens of friendly countries, particularly in India’s neighbourhood.  India is being alluded to as the ‘Pharmacy of the World’, as it is now producing 60% of the vaccines produced globally. The emphasis in this effort is to get 300 million Indian nationals vaccinated by July 2021.  Supplies of vaccines have already reached the Maldives, Nepal and Bhutan, with two million vaccines being dispatched to Bangladesh and one-and-a-half million to Myanmar. Other destinations for Indian vaccines are Sri Lanka, Saudi Arabia, Afghanistan, Mauritius, Morocco and Bahrain. Vaccines are also being dispatched free of charge to some of the least developed countries in India’s neighbourhood.

People in India are now hoping, and are reasonably confident, that the present trends will continue, especially in Asia. Moreover, thanks to some innovative methods India has adopted, the contraction in the country’s GDP in the current financial year has been estimated at a manageable 7.4%. But what trends might the people of India see in the next few years? One can be confident that, while there may be ups and downs, there will be enough momentum in the months ahead to achieve a growth rate of 7.6% in the coming financial year.  The pandemic has, however, brought significant changes in the lifestyles and working practices of people, particularly professionals, which will probably remain radically different from how they were previously. This appears inevitable, thanks to the innovative work practices and priorities adopted at the height of the pandemic. Thousands of migrant workers fled from their workplaces to their home villages in India when the pandemic broke last year. But now, with death rates steadily dropping and normal business activity gradually increasing, a large number of these migrant workers are returning from their villages to their workplaces.

The advent of the Biden Administration in the United States has certainly been helpful. President Trump did precious little to deal with the pandemic, both domestically and internationally. President Biden is more conscious of the need for the US to be more active internationally on health issues like Covid-19, and on climate change. Much more, however, needs to be done globally to help those with limited resources, when the world is confronted by disasters like the Covid-19 pandemic and the serious impact of climate change.

G. Parthasarathy, a career Foreign Service Officer, is currently Chancellor of the Central University of Jammu and Visiting Professor at the Centre for Policy Research in New Delhi. He previously served as Ambassador of India to Myanmar, High Commissioner of India to Australia, Pakistan and Cyprus, and Spokesman of the Prime Minister’s Office