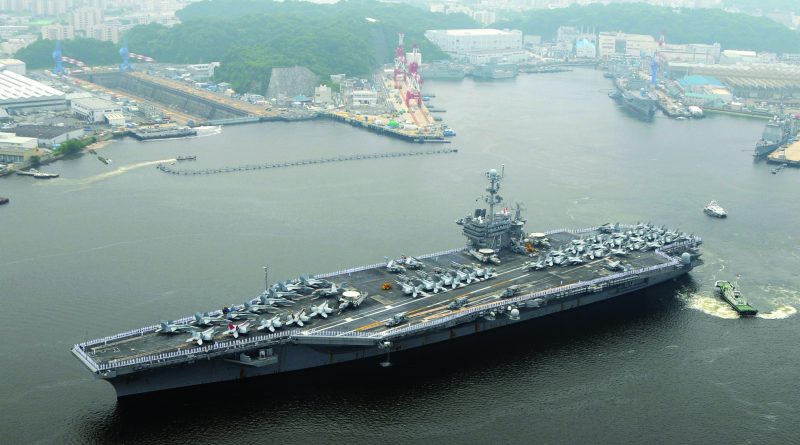 US Navy’s blueprint for Asia

The US Navy is urging President Biden to station a large battle fleet at the crossroads between the Indian and Pacific Oceans. This force, which would be known as the 1st Fleet, could be based in either Western Australia or South East Asia. But, as Andy Wong   explains, there are strategic and geopolitical issues to consider before the President grants approval.

When President Joe Biden made his first major speech on foreign policy in January this year, he identified China as the ‘most serious competitor’ to the United States.

Given the vital strategic interest of the United States in countering China’s growing military presence in the Indo-Pacific region, President Biden pledged to reinvest in international diplomacy, telling his audience that ‘America cannot afford to be absent any longer from the world stage’, as he stressed the importance of reviving alliances with other nations.

One such ally is Singapore.

Under the Biden administration and American return to multilateralism, the relationship between the US and Singapore has reached an important turning point. While the Straits of Singapore and Malacca have long been of strategic importance, they are now the scene of rivalry between the navies of China, the United States and other Asian countries.

At present, the only US fleet in the Indo-Pacific is the 7th Fleet, based at Yokosuka Naval Base in Japan. It is currently centred around the Ronald Reagan Carrier Strike Group.

Until 1973, there was a fleet in the western Pacific Ocean known as the 1st Fleet. Now, the plan is to revive this numbered fleet and keep it in the region as part of overall US Pacific Fleet Command.

Such an idea was originally mooted in the final days of the Trump administration by former Navy Secretary Kenneth Braithwaite. It was signed off by both outgoing US Secretaries of Defence, Mark Esper and Christopher Miller.

If President Biden decides to revive the 1st Fleet, then the only realistic choices of location are either Singapore or Western Australia.

In my view, Singapore provides a better base than Western Australia, as any naval fleet would have immediate access into the South China Sea, as well as a commanding presence over one of the busiest shipping lanes in the world, which connects Asia with Africa and Europe.

If Australia were to be chosen instead, then the proposed 1st Fleet would have unfettered access to the Indian Ocean, but nowhere else.

Singapore is officially a non-aligned neutral nation, in terms of military cooperation – yet it is firmly in the same camp as the United States. Singapore buys most of its weapons from the US, and the two nations already have several defence cooperation agreements. Furthermore, Singapore already plays host to the US 7th Fleet’s Logistics Group (Western Pacific).

However, the proposed re-establishment of the 1st Fleet will be difficult to bring to fruition.

Although the plan was given a favourable reception by the Trump Administration, it has yet to be approved by President Biden, who is seeking to change the direction of US foreign policy, steering it away from Trump’s legacy.

Furthermore, it is not clear what ships would join the 1st Fleet or how operational responsibility would be assigned.

Despite the US Navy’s target of having 500 ships in Indo-Pacific waters by 2030, it had fewer than 350 vessels there in 2020.  Re-establishing the 1st Fleet would mean redirecting some vessels from the 7th Fleet based in Japan, creating potential difficulties in East Asia.

With two US fleets in the region, one in Japan and one in Singapore, the US could conduct a pincer movement on Chinese naval activity in the South China Sea.

However, this move risks provoking the Chinese into intensified militarisation of South China Sea atolls and islands.

China will undoubtedly put pressure on Singapore to refuse an American request to host the 1st Fleet.

Neighbouring countries such as Malaysia and Indonesia may also be concerned. Historically, they have had difficult bilateral ties with the US and simultaneously feel uncomfortable about Singapore’s tight connection to America.

Finally, there is the nuclear issue.

At present, Singapore sometimes allows a US nuclear supercarrier to dock for liberty calls whilst visiting the region.

However, to offer the port as a permanent base for nuclear-powered and possibly nuclear-armed US warships would place a momentous military responsibility on Singapore. What is more, it is a move which risks serious retribution from China.

Both the US and Singapore face difficult decisions as, in the interests of enhancing security in the Indo-Pacific, they may also create some real security threats.

Andy Wong is an independent defence and current affairs analyst. Currently based in Singapore, he specialises in international relations, Asian-Pacific geopolitics, maritime security and naval strategy